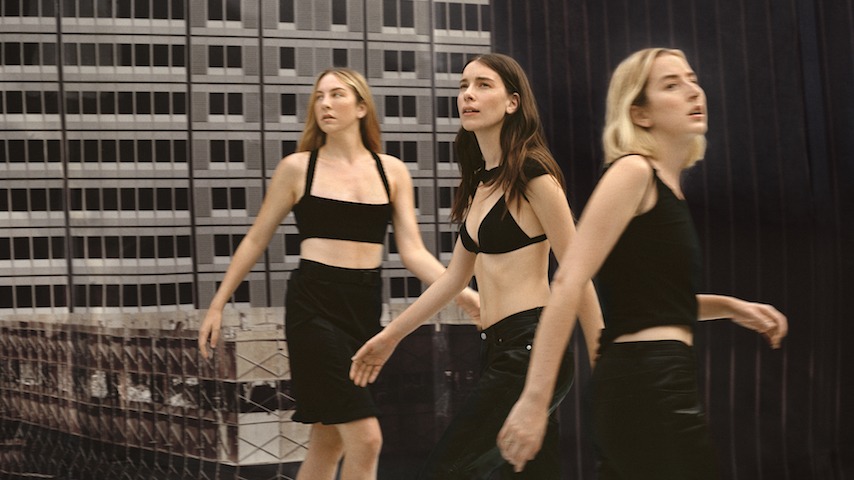 Danielle begins the third HAIM LP by bemoaning the city that built them. “Los Angeles, give me a miracle,” she sings after a flurry of saxophone starts the song. “I just want out from this.”

She continues into the chorus as her sisters Alana and Este join in on backup, singing “These days I can’t win.” The City of Angels is also the city of sweaty, broken dreams, as any struggling actor, screenwriter or regular-person-stuck-in-traffic can tell you. Even Danielle—primary songwriter for the trio—who was born, raised and primed for rock stardom in the sprawling city clearly can’t stand it some days. But she comes back around before the end of “Los Angeles,” the first song on the sister band’s chic third LP Women in Music Pt. III, with a classic “Screw you” to L.A.’s East Coast rival: “New York is cold / I tried the winter there once,” she sings before adding a dry “nope.” “Clearly the greatest city in the world,” she continues, “But it was not my home / I felt more alone.”

The word “alone” appears frequently on WIMPIII (the acronym is just another perk of the album’s clever, satirical title). It’s even in the title of electro-rock single “I Know Alone,” which is easily one of the best songs they’ve ever released. Danielle describes a fog of depression in which “nights turn into days,” admitting that she “doesn’t want to give too much / feel too much.” Loneliness and depression are on the docket again in the deceptively chipper Americana/funk number “I’ve Been Down,” which lands like an updated version of L.A. group Redbone’s 1974 hit “Come and Get Your Love.” “The love of my life sleeping by my side, but I’m still down,” Danielle sings. This moment pairs well with the poppiest song of the bunch, single “Now I’m In It,” which Danielle said is “about going through it. a depression.” Each conveys some feeling of being stuck.

Danielle’s depression, which she has attributed to the struggles she and her partner/producer Ariel Rechtshaid faced upon his testicular cancer diagnosis in 2016, informs some of WIMPIII’s most specific and heartfelt lyrics. But her sisters’ struggles are just as important. Alana remembers her best friend who passed away at 20, while Este’s life has been full of ups and downs since her Type 1 diabetes diagnosis during her freshman year of high school. They all lean on each other, and that love is perhaps loudest in stirring folk number “Hallelujah.” Though outwardly carefree, WIMPIII finds HAIM exploring darker and more serious matters than ever before, which is one reason why it’s their most complete and forward-thinking release yet. Many of these songs find Danielle, Alana and Este flat on their backs, but it’s never long before they’ve returned to their default position: upright, strutting confidently through the streets of L.A. and life itself.

After their somewhat disappointing (but not at all bad) 2017 LP Something To Tell You, the dynamic WIMPIII is proof that HAIM is a true album band. They’re consistent, they’re restless and they’re artistic collaborators of the highest order (just ask Paul Thomas Anderson, who directed the music videos for each WIMPIII single). They and former Vampire Weekend drummer Rostam Batmanglij, who co-produced the album along with Danielle and Rechtshaid, bring out the very best in each other. While the sisters are diligent in mapping out their homegrown West Coast influences on this emotional LP, there’s no denying Batmanglij’s East Coast vibes on “Leaning On You” (which marks another instance of the word “alone”), a bouncing folk-pop love song that bounds into Vampire Weekend territory.

Yet, some of WIMPIII’s best moments could’ve easily fit in on HAIM’s prior pop-rock releases. They revisit well-trod themes of longing and regret for old relationships, but those feelings are often replaced with hope for current ones: “The Steps” is a sexy song about two people moving in opposite directions that somehow lead back to the same place when it really matters. They’re even more romance on companion songs “Gasoline,” a truly sensual slow jam that was made for making out all night in the car, and “3 AM,” an ode to West Coast hip-hop, classic R&B and boy bands—one of the slickest songs you’ll ever hear about a booty call.

“All That Ever Mattered” is another incredibly stylish track that twinkles with details only the triple production powerhouse that is Danielle, Batmanglij and Rechtshaid could finesse. There’s no shortage of incredible guitar work on this album, either (see: “FUBT,” aka “Fucked up but true / that I love you like I do”—can anyone relate?). “Another Try” charms with Blondie-style pop and touches of reggae. All of this comes before the record’s final track and first single, “Summer Girl,” in which Danielle has “L.A.” on her mind yet again. WIMPIII begins and ends with this city, the saxophone and a somber nod to Lou Reed—a New Yorker, but an artist who, like HAIM, knew that rock music could be glamorous, promiscuous and multi-dimensional.

With all its danceable moments, WIMPIII is worthy of its own instructional aerobics video (which the band has essentially provided in the form of Instagram lessons teaching their now-signature coordinated dances to fans). But it takes the upbeat relationship songs with a grain of salt: the reality that even when you have everything you need, even when your family is there to support you, even when the love of your life is sleeping right there next to you, it’s not ever going to be perfect, and you’re going to fall down. But resilience is WIMPIII’s central theme. This album is their strongest, longest collection of songs to date, and it is enormous, but the HAIM sisters have tamed that ambition into something effortless. This band captivated so many of us from the moment we first heard those unmistakable shrieks of electric guitar on “The Wire” in 2013, but it’s even more exciting now to watch the trajectory of their careers. WIMPIII impressively leads us to believe that the best could still be on HAIM’s horizons.