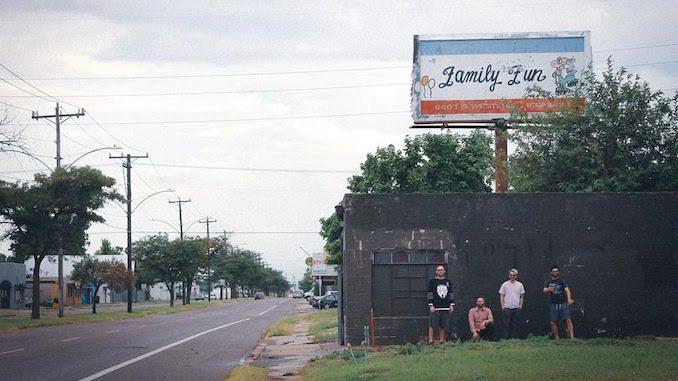 Oklahoma City’s Chat Pile are the perfect people to expose the dark, seedy underbelly of American life. Following their scathing single “Slaughterhouse,” which we named one of the best songs of May, Chat Pile offers up another gritty single ahead of their forthcoming album God’s Country (July 29, The Flenser).

If “Slaughterhouse” stared into the face of God and spit in it, “Why” shoves his face to be confronted with the human condition. Frontman Raygun Busch desperately wails “Why do people have to live outside?” as the chugging guitars erect a wall of sound between him and his hope to change such a pervasive issue as homelessness. A chilling tornado siren rages on with the biting riffs, forcing those complacent to reckon with the vulnerability of those left in the margins.

Speaking further on the concept of “Why,” Busch explained:

In OKC, there are huge crosses and statues of Jesus and enormous churches everywhere and yet the teachings of Christ cannot be found implemented anywhere. This is true for much of America and probably the world. Why? I hate seeing suffering; don’t you? Why should I live in a house while someone else lives under a bridge? Why do people have to live outside? Wickedness, all around us. Real horror.

Bassist Stin also gives context to the chilling siren sample toward the end of the track:

“Why” contains a sample of the infamous Oklahoma tornado siren, which aside from going off regularly during the busy spring storm season, is tested every Saturday at noon in Oklahoma City. One particular Saturday, all four members of the band recorded the siren independently in different locations. We synched the recordings together and placed it in the song to help add a sense of place and also drive home the impending doom we all feel. We hope it makes your stomach knot up with anxiety the way it does ours. Most people get to hear the tornado siren from the safety of shelter, but others do not. At any rate, having a literal alarm sound felt very apropos to the material.

Below, listen to “Why” and preorder God’s Country ahead of its July 29 release here.