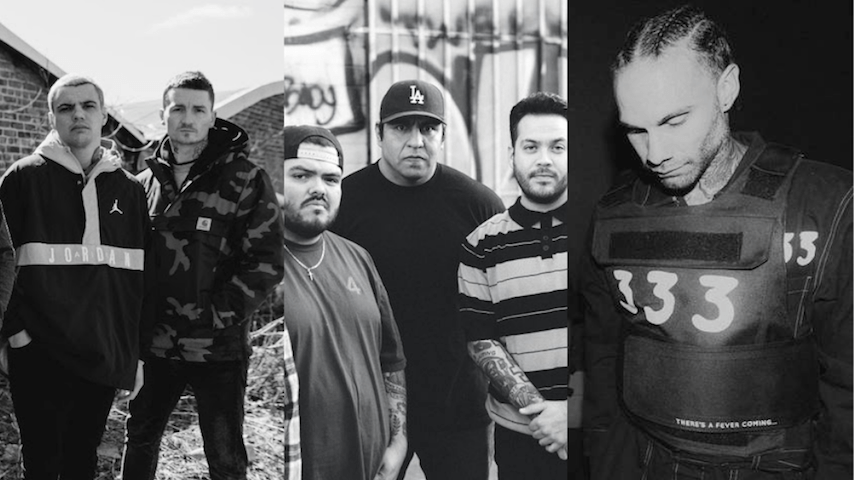 Hardcore is a genre rooted in politics. Its very sound echoes the energy of a rebellion, and every show has fans swinging their bodies around and screaming like there’s a riot going on. There are a lot of bands whose activism and reckoning with justice is year-round, not just during the time of another tragedy, and it’s important to support them. In a way, listening to them is a method of radicalizing yourself, whether they’re screaming about the consequences of capitalism, the ethics of a police state or the injustices that happen in America everyday. Scroll down for some of the best politically-charged hardcore bands around right now.

Hailing from the San Pedro community in L.A., Rotting Out were far too familiar with violence and gang activity, and they joined the hardcore scene for refuge. Their biggest hit “Laugh Now, Die Later” says it all: “We laugh at the fact that we’re still slaves to regret / We try and try and try to forget.” The band is all about survival, as they shed light on the struggles of growing up in an area infested with drugs and abuse. They capture the aggression with strained screams, catchy riffs and chaotic breakdowns, and their latest album Ronin—which came out after frontman Walter Delgado went to prison and serious therapy—is an essential listen.

Fever 333—the self-proclaimed “hybrid of hip-hop, punk and activism”—are all about revolution. “Made An America” is less of a song and more of an anthem for rebellion, with each lyric cutting deep: “We’re giving thanks for measles, blankets and genocide / They call it ‘cleaning up the streets,’ we call it ‘homicide.’” Every song tackles a different issue, and they’re unafraid to address the fact that America is stolen land, capitalism is inherently unethical and sometimes violence is the answer.

Stray From The Path

Long Island’s Stray From The Path are palpably political, with song titles that range from “Goodnight Alt-Right” to “Comrades.” Reckoning with police brutality on “Badge and A Bullet,” vocalist Andrew Dijorio shouts, “They abuse their authority / Now I know my enemy!” They get more to the point on “Badge and A Bullet Pt. II,” whose lyrics mostly sound like chants at a protest: “So where the fuck is the justice? / Which side are you walking on?” They emphasize that it’s not enough to be quiet allies—you need to find yourself active in the movement.

Show Me The Body

Show Me The Body is not only politically-charged, but they’re probably the most sonically-diverse band here. Hardcore, noise rock, hip-hop and metal are some descriptors, but more than anything, they embody the sound of where they’re from: New York. Julian Cashwan Pratt told Crack Magazine, “We don’t make political music. We just address what’s happening around us.” It’s simple, but it’s true, and it’s what makes them confrontational and raw. On “Badge Grabber,” he says in eerie spoken-word, “Your face will change / Your name is gone / No more anyone / Hold a badge, hold a gun.” It’s music that disrupts and probably makes most listeners uncomfortable, but it’s for a purpose.

Fronted by Ice-T, Body Count are well-known for their politics. The spoken-word intro to “Black Hoodie” is particularly relevant: “All these people out here tripping off police brutality / Like this shit is something new / Give me a fucking break / I’ve been talking about this shit for over 20 years!” Then the song launches into metallic riffs, turning into a sonic revolution. They make the type of confrontational music that’s meant to be blasted at a protest, and the fact that they released an album just a couple of months ago titled Carnivore proves that they’re still kicking it.

Hailing from Long Island, this fiery hardcore crew are sick of injustice. Incendiary declare war on “Fuck Your Beliefs,” screaming, “The hypocrisy of your institutions will not be ignored / You feed off their flesh and you drink their blood!” They want to destroy the world and rebuild a better one. Through hyperspeed drumming and caustic riffs, the band wreaks havoc and exposes bullshit, especially on “Antichrist”: “You prey on the poor, the misinformed / With an agenda of hate and bigotry / Not anymore!”

This Texan metallic hardcore four-piece are painting a dark portrait of the South with every song. Kublai Khan TX don’t hide any details about the reality of their lifestyle, especially in the heavy “High Hopes”: “Intake drug deaths and homeless heart aches / Sad truth is that most of you will die full of holes.” Their politics are much more subtle, but the music is fast, sludge-leaning and merciless.

Philly’s Soul Glo are one of a kind. The band are here to make noise, send messages and raise awareness—whether it be with their frenzied punk track “Violence Against Black Women Goes Largely Unreported” that confronts rampant toxic masculinity and the struggles of black women head-on or the frantic “22”: “Shoutout to my stolen peoples, my single tears, my entire seas! / Shoutout sweeping separation from the so-called punk scene / Benefit gigs for presidential bids are clearly only strange to me.” They deal with politics in the realm of the black community, the punk scene and the working class, but they know no bounds.