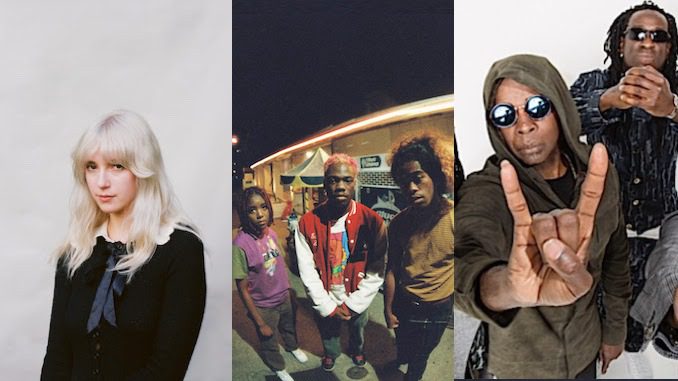 Festival season is upon us, which means your buddies at Paste get to bring to you all the fun and exciting acts to catch when you’re busy making your schedule. Make sure you stay hydrated and safe at Chicago’s Riot Fest, the legendary rock festival that never fails to pull out all the stops. Whether rocking out to Body Count or dancing to BLACKSTARKIDS, Riot Fest has acts across all genres for everyone to enjoy. Check out some of our picks and catch us in the pit this weekend! You can follow all of our Riot Fest shenanigans on Instagram here.

BLACKSTARKIDS is a Kansas-based trio with endless potential. The group takes upon influences from endless sources ranging from hip-hop to bubblegum pop to create a thrilling amalgamation of sounds and feelings. Their music is just as humorous as it is serious, tackling issues of mental health and relationships through the lens of three young musicians. With BLACKSTARKIDS, a pop culture reference is just as effective as an overwrought description of suffering and sadness. Catch them at Riot Fest and see for yourself.—Jade Gomez

Body Count has been adorned with many labels over the years ranging from thrash punk to rap metal. With many political songs under their belt, they have also become more relevant than ever. One thing is for certain: after 30 years, they still shred. Fronted by rapper Ice-T, Body Count has established themselves as risk takers in a genre full of purists, combining T’s iconic talk-rap with the chaos of his backing band’s metal prowess. Come for the politics, stay for the riffs.—Jade Gomez

Yes, there’s the glaring Coheed and Cambria overlap this year, but if you want to witness punk history, maybe mosey on over to Circle Jerks’ set. The iconic punk band will be touring in 2021 and 2022 in support of the 40th anniversary of Group Sex. Most of the band’s final lineup, which includes Keith Morris (Black Flag, OFF!) on vocals will be present to rip through the band’s impressive catalog of fast-paced, self aware hardcore punk.—Jade Gomez

Former letlive. vocalist Jason Aalon Butler is a showman in every sense of the word, and his stage presence is just one of the reasons why Fever 333 has been one of the leading innovators in hardcore punk since their inception in 2017. Combining radical left-wing politics with their addicting spin on rap rock, Fever 333 has joined the ranks of fellow genre-breakers such as Rage Against the Machine to create music that is more important than ever.—Jade Gomez

We may be a little biased because 22 year-old girlpuppy also hails from Atlanta, Georgia, but over at Paste, we believe she’s destined for stardom. Her debut EP Swan features heartfelt serenades and bouncy indie rock jams that make her irresistible, and her delicate voice is simply magical. Catch the rising star this weekend.—Jade Gomez

Kennyhoopla is a rising pop-punk star with endless potential, echoing back to the early days of heat-damaged bangs and black eyeliner. However, he rings in the RAWRing ‘20s with a post-punk twist, blending together Bloc Party-esque vocals with the never-ending energy of a seasoned punk star. Born Kenneth La’ron, the Cleveland, Ohio-born musician is becoming one of the biggest acts to look out for in rock music today. You can be one of the cool ones and say you’ve seen him first. Who knows, maybe his tour mate Machine Gun Kelly will also make a surprise appearance!—Jade Gomez

With CM Punk making his righteous return to wrestling, it’s only fair that Living Colour touch down in his hometown of Chicago and make some noise of their own. Aside from their iconic protest anthem “Cult of Personality,” Living Colour’s impressive catalog spans a multitude of genres aided by the irreplaceable guitar legend Vernon Reid. The band still has fuel in them, and in times like these, we could all use a little reminder of why we fight.—Jade Gomez

In a lineup of historically hard rock artists, Señor Kino provides a pastel shade of the genre—one rooted in psychedelic and surf rock. The five-piece group from Hermosillo, Mexico released their third album, Aurora Boreal, in June, where they embrace a more nonchalant approach to their music, trading sprightly beats and shouts for transient, echo-saturated sounds that seem to move and interact with minds of their own, both jam-like and simply structured. In late February, Señor Kino released their only live album, Noche de Brujas 2020 (En Vivo), where their punk rock twinge was embraced, punchy grooves integrated into many of their smoother tracks. The group intertwines psychedelic, surf and punk rock in a delectable manner, and their recent albums are promising for a pleasant performance at Riot Fest.—Ana Cubas