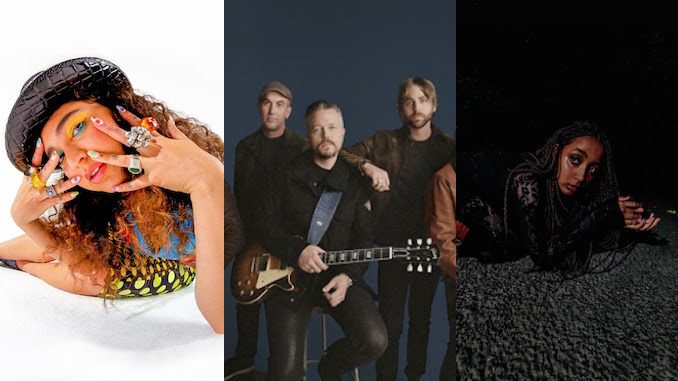 Give it up already. It’s not going to get warmer, and you’re going to have to dig out that box of sweaters you left in the basement/attic/storage unit. You may get distracted with some old mementos and forget about the sweaters. Why not make a playlist to accompany you? Go with some good ol’ funk from Remi Wolf, the gorgeous soundscapes of Xenia Rubinos, or maybe you’d rather pick a fight while listening to some Zack Fox (yes, he has an album out and it is great). Paste has you covered. Check out all our must-hears of the week below.

The second self-titled record from Montreal act Choses Sauvages is good for nearly an hour of dance floor bliss, its escapism enhanced further by the band’s French lyrics. Sleek and bright, Choses Sauvages II is groove-driven above all else, with irresistible rhythm underscoring its versatile displays of guitar-rock edge (“Science du bruit”), psych-funk revery (“La musique”) and synth-pop slow-jamming (“Colosse,” featuring Laurence-Anne). Despite their variety, these songs don’t feel fussed over—the band only ever moves as a unit, protecting their music’s momentum like shielding a flame from the wind, but without sacrificing the celebratory aura that made their SXSW 2021 set a standout. Choses Sauvages combine the introspective and the euphoric with confidence, delivering a vivid sophomore effort that will get you moving, even as society feels in many ways like it’s standing still. —Scott Russell

Chicago’s own Dos Santos hold a world’s worth of messages in such concise songs. Their new album City of Mirrors explores weighty messages of oppression and migration, enveloped in spiraling guitars and drums. Keeping in time with the protest folk songs that many Latinx people grew up hearing, Dos Santos create their own tales of freedom and unity with a dazzling technicality. Their music’s influences range from psych to math rock to folk music, but it is all centered around the band’s undeniable Latin influence that shines through. City of Mirrors is an album to be enjoyed for years to come, passed on for generations, like the songs of our ancestors’ triumphs and hardships. —Jade Gomez

Eternal Home is the most expansive statement yet from Chicago-based producer, composer and multi-instrumentalist Angel Marcloid, who records as Fire-Toolz, among other monikers. The prolific artist’s seventh full-length since 2015 is a 78-minute double album that seems to defy time, not to mention genre classification, sweeping you into a whirlwind of ambient, yet melodic, Oneohtrix Point Never-esque electronics, operatic prog percussion, caustic black metal vocals and heavy shoegaze guitars. These elements collide to particularly mesmerizing effect on standouts like “Odd Cat Sanctuary” and “Thick_flowy_glowy_sparkly_stingy_pain.mpeg,” demonstrating the unconscious precision of Marcloid’s vision. Eternal Home makes, say, hyper-pop feel quaint, treating experimental sounds not as a fashion statement, but as a governing principle. If you have yet to wander into the topsy-turvy world of Fire-Toolz, there’s no time like the present.—Scott Russell

Julia Shapiro, patron saint of the Seattle indie music scene (see: Chastity Belt, CHILDBIRTH, Who Is She?), packed her bags and moved to the sunnier climes of Los Angeles in March 2020. That same month … well, we all know what happened. Isolated and far from all that she held near and dear, Shapiro had an identity crisis that spiraled into an existential crisis, as well. “I had no friends. I was alone. I asked myself, ‘Why am I here?’ Just every day: ‘Why am I here?’” she recalls in a press release for her new solo effort, Zorked (definition of “zorked”: being in an altered state of mind, be that high, exhausted, drunk, etc.). Like many people in the pandemic who were cut off from the activities and people that helped define their personhood, Shapiro questions who and why she is throughout her new LP. Shapiro’s record is intensely personal, but she viscerally taps into an idea plaguing the public consciousness right now: that we aren’t alright, and maybe never will be again. Maybe that kind of despair is just part of being alive and clear-eyed in 2021. —Clare Martin

The debut album from Montreal singer/songwriter Le Ren (Lauren Spear), Leftovers is more of a feast for folk music enthusiasts. The LP features singles “Dyan” (a Paste Best New Songs pick in August), “I Already Love You” and “May Hard Times Pass us By,” as well as collaborations with Kori Miyanishi, Cedric Noel, Saltwater Hank (Jeremy Pahl), Eliza Niemi, Kaïa Kater, Aaron Goldstein, Buck Meek (Big Thief) and Tenci (Jess Showman). There’s a tender precision to Spear’s songs, which are deeply felt, yet carefully crafted, a balancing act many songwriters never quite crack. The aforementioned “Dyan” is a moving tribute to Spear’s mother, while the lush, string-adorned “I Already Love You” was written with Spear’s own potential child in mind. Just as that love echoes through generations, Le Ren’s music is part of a lineage that transcends time, carrying the folk mantle forward into a new era. —Scott Russell

PinkPantheress: to hell with it

Have you ever had that one cute TikTok song stuck in your head? The nightcore-esque one that goes, “When you wipe your tears, do you wipe them just for me?” Yeah, that’s PinkPantheress. Unlike some of the other music sensations the app has churned out, the 20-year-old producer has the charm and the ear that translate into the potential for longevity. On her debut album to hell with it, the songs are more fleshed out than ideas slapped around a perfect TikTok snippet—an unfortunate road many musicians are going down as virality trumps actual songwriting. PinkPantheress captures a distinct Y2K nostalgia very well for someone who didn’t live through it, with a whimsical artificiality, similar to the Jamster commercials of our childhoods and the macabre of artists like Kerli. In an era where pop musicians are adored, chewed up and spit out, PinkPantheress is working on her own terms and creating music that resonates without trying too hard. —Jade Gomez

Remi Wolf is one of pop’s most exciting acts in recent memory. Following a series of EPs beginning with 2019’s You’re a Dog!, Wolf has since gone on to collaborate with everyone from Beck to Nile Rodgers, thanks to her joyfully eclectic brand of soul and funk. Her debut album “Juno“:https://www.pastemagazine.com/music/remi-wolf/remi-wolf-announces-debut-album-juno/ is already accompanied by a hefty amount of singles, which utilize the same palette in an ever-changing kaleidoscope’s worth of ways. Whether singing about ordering Chuck E. Cheese on Postmates or calling herself a “thrift store baddie” on “”Liquor Store”:https://www.pastemagazine.com/music/best-songs/best-songs-july-2021/#remi-wolf-liquor-store-,” Wolf’s brand of humor is just as tapped into current culture as someone like Lil Nas X’s, if not a little more crude and surreal. Wolf has most of the pieces in place to become the next big thing, and Juno is the final one. —Jade Gomez

Five years on from her second album Black Terry Cat, Xenia Rubinos shows the value in waiting. Her third album, Una Rosa, is a welcome treat after such a long period of silence. Combining Cuban boleros with synths and drums marries what seem like two opposite sides of her world, creating an album rife with experimentation without feeling alienating. Rubinos dances between English and Spanish, layering mind-bending harmonies and clashing melodies in such a breathtaking way. Rubinos’ artistry will only continue to expand from here. —Jade Gomez

Zack Fox: shut the fuck up talking to me

Like many things, if it starts as a joke, it usually ends up becoming serious. For comedian Zack Fox, it went from the tongue-in-cheek “Square Up” and the legendary meme “Jesus Is The One (I Got Depression)” to a full-on album with a coveted Alchemist production credit. Shut the fuck up talking to me is anything but a joke, and Fox clearly has the rapping chops to prove it. Of course there’s no shortage of funny lyrics (“Bitch got hella kids, house look like All That” from “get off my dick” is a personal favorite), but Fox also possesses a keen sense of balance when it comes to cultural references, humor and menacing threats taken right out of the pages of rappers like Bone Crusher, Young Dro and Lil Jon (who also gave him a co-sign). Fox proves he has more to his name than funny tweets and a wicked sense of humor, and shut the fuck up talking to me is only the beginning. —Jade Gomez