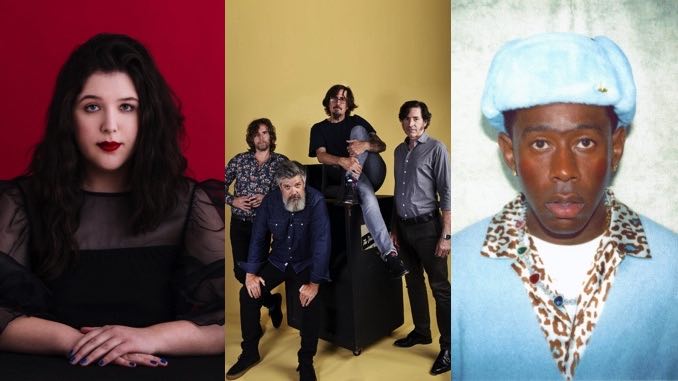 We’re going to keep this introduction as brief as we can, because this New Music Friday is absolutely overflowing with albums that demand your full attention. Lucy Dacus, The Mountain Goats and Tyler, The Creator all dropping on the same day would qualify as a seismic event in and of itself, but that’s only the tip of today’s iceberg: Faye Webster, Pom Pom Squad and Gaspard Augé of Justice have new albums out, as do the inimitable SAULT (!), and as if that weren’t all staggering enough, Backxwash released her excellent new album last weekend, which we’ve included with today’s slate. Dive into it all below, and don’t miss the honorable mentions section at the bottom—there are records in there that would be headlining this list on an ordinary release day.

Backxwash: I Lie Here Buried With My Rings and My Dresses

Backxwash, noted for her groundbreaking 2020 album God Has Nothing to Do with This Leave Him Out of It, which won the 2020 Polaris Music Prize, can capture the ears of even the most metal-averse listener. Her new album I Lie Here Buried with My Rings and My Dresses, released June 20, expands upon her chaotic blend of heavy metal, punk and hip-hop that pays homage to horrorcore pioneers such as Three 6 Mafia and Esham, as well as her modern-day inspirations such as clipping. (who contribute production to “Blood in the Water”) and Danny Brown. In the midst of her lush wall of sound is an attempt to make sense of who she is, why she is here and other philosophical questions that rest within the crevices of our psyches that she dares to explore. —Jade Gomez

In conversation with Paste about her 2019 standout Atlanta Millionaires Club, Southern singer/songwriter Faye Webster told us, “I think what makes it nice is that there are songs on this record that could have been on my self-titled or could’ve even been on Run And Tell, my 16-year-old album. Every album has been like the small gateway to something new, but it still all makes sense.” That holds true on the 23-year-old’s fourth album (and second for Secretly Canadian), another lovely combination of loping, lap steel-laced Americana-pop that’s as nuanced, yet charming as Webster herself. An ATL native with ample ties to the city’s sprawling hip-hop scene, the singer/songwriter reunited with frequent collaborators including producer/mixer Drew Vandenberg and pedal steel player Matt “Pistol” Stoessel to create I Know I’m Funny haha, her most thoughtful and self-assured effort yet. Webster has carved out a stylistic niche entirely her own, and it’s only a matter of time before a far wider audience catches up to her. —Scott Russell

Escapades is an apt title for dance auteur Gaspard Augé’s debut solo album, capturing fleeting moments of joy and excitement. Augé’s trademark maximalist production is much smoother on his solo release than his contributions to Justice’s ridiculously abrasive sound. The drama is still there, evocative of operas and ‘60s romance films, but without the cue cards to tell you what to feel and when. Even then, it feels unfair to pinpoint exactly where Augé’s mind went when creating this album, as it seems to write its own rules as it goes. That is where much of the magic in Escapades lies, allowing one’s psyche to fill in the blanks of choruses and hooks as subtle musical tricks transport listeners into his head. —Jade Gomez

On Fatigue, the second album from Brooklyn singer and multi-instrumentalist Taja Cheek (aka L’Rain), the artist presents lush, textural music that encourages deep, emotional change. Each song its own sonic universe, the sprawling compositions are matched with introspective lyrics that guide the listener towards individual catharsis. Songs like “Two Face” experiment with dark themes and conversational misunderstandings atop an extremely lively, jazzy-sounding beat, while “Suck Teeth,” a song meant to evoke “a very Black sound of disapproval, annoyance and disappointment,” is groovy and unsettling. Several short interludes scattered throughout the album offer glimpses into its creator’s mind, pulling the listener deeper into Cheek’s creative vision. Fatigue, with its ever-shifting soundscapes, illuminates the magical aspects of change, and how it can shape us into the best versions of ourselves. —Jason Friedman

Digging into personal history is not a new undertaking for Lucy Dacus. Historian, Dacus’ 2018 album (as well as Paste’s pick for the best of that year) and the follow-up to her 2016 debut No Burden, followed the end of a five-year relationship and the death of Dacus’ grandmother. She did a magnificent job throughout the album knitting together her own sorrows and joy with our collective strife in 2018. It’s clear on her third LP, Home Video, that the Virginia-born singer/songwriter wasn’t quite finished exploring her past and how it connects to the present. Throughout Home Video, Dacus revisits key scenes from and offers reflections on her childhood in Richmond, with the unexplainable perspective of not only someone who lived that childhood, but also—somehow—someone who witnessed it. First and foremost, Dacus is a storyteller. Home Video, recorded at Trace Horse Studio in Nashville, is just what you’d expect from such a talent. Here, her wise brand of rock music blooms into something even more palpable, relatable and beautifully messy. —Ellen Johnson

The Marías simply understand how to capture the alluring sex appeal found in old films and pinup photographs, and that appeal runs deep. Their aptly titled debut album Cinema is a sultry exploration of empowerment, lust and desire, wrapped into a modern interpretation of old soul and R&B. Frontwoman María’s hushed vocals cradle every syllable with a care that captures your attention until the record ends, begging for one more replay. As their lead single “Hush” first showed us, this record is the perfect companion for hot summer nights, both alone and with company. —Jade Gomez

The Mountain Goats: Dark In Here

As the tale goes, John Darnielle, Peter Hughes, John Wurster and Matt Douglas, plus guests ranging from Spooner Oldham to Marie Tomlinson Lewey, gathered together on the cusp of the pandemic in March 2020 to record Dark in Here, as well as their October 2020 release Getting Into Knives. Don’t think of Dark in Here as a COVID album, though. The music is so good, so cohesive and confidently made, that the record’s relevance will live on well beyond the 2020s; Dark in Here won’t become a relic of its time, but a marker. This happened. This is what The Mountain Goats did when this happened. Maybe listening to Dark in Here will help their audience move forward, even if the band puts on no such airs. They’re straightforward. They’re even realistic about what “moving forward” even means when fucking up is fundamental to human nature: “We’ve made mistakes / Everyone spots their own mess when the dawn breaks,” Darnielle murmurs on “When a Powerful Animal Comes.” The dawn has broken and we all know the myriad “oopsies” that led us to where we are now. Dark in Here isn’t a solution to the problem. It’s just a damn good soundtrack. —Andy Crump

Mia Berrin of Pom Pom Squad has long been an avid explorer of pop culture, though as a person of color and a queer woman, neither facets of her identity have historically been given much attention in media. She dealt with this lack of representation resourcefully, finding snippets that resonated with her. She explains in a press release, “I absorbed everything I could and tried to make a collage that could incorporate every piece of me.” Now, with bandmates Shelby Keller (drums), Mari Alé Figeman (bass) and Alex Mercuri (guitar), Berrin is ensuring that present and future generations won’t have to live on meager scraps. Death of a Cheerleader synthesizes Berrin’s various influences—aesthetic, musical, cinematic—but ends up as a creature entirely its own, telling Berrin’s story in a way that’s sure to hit home with many who struggle to see themselves in whitewashed Hollywood releases. The album is well-realized conceptually and brilliantly, viscerally executed. —Clare Martin

After releasing not one, but two of Paste’s top 2020 albums, enigmatic U.K. soul group SAULT are back with a new project. Like everything they do, Nine is enshrouded in mystery and excitement alike—the band announced their new record only a week or so ago, and will only make it available for 99 days before pulling it from the web, so make sure to give it a spin before (*crunches numbers*) Oct. 2. One of the band’s slightest projects at just 10 tracks (including intro “Haha” and interlude “Mike’s Story,” featuring Michael Ofo) and 34 minutes, the nimble Nine foregrounds shifty grooves and stories of street life rendered via grippingly rhythmic vocals, featuring London rapper Little Simz on “You from London.” Though lyrically, the album is concerned primarily with cycles of violence, it gradually moves from thick-skinned resignation to resilient hope as the album progresses: “Don’t ever lose yourself / You can always start again,” SAULT sing in unison on uplifting closer “Light’s In Your Hands.” It’s the audio equivalent of flowers growing through cracks in concrete, and another powerful effort from a singular outfit. —Scott Russell

Tyler, the Creator: Call Me If You Get Lost

One of things that has made Tyler, The Creator’s career so particularly striking is his commitment to utilizing the album format less as a collection of songs and more as a way to develop a cohesive aesthetic vision. On his excellent 2019 album IGOR, Tyler embraced bright synths and pop structure to express feelings about a lost love. With Call Me If You Get Lost, old-school hip-hop callbacks are paired with light and jazzy flutes for some of Tyler’s most personal and reflective songwriting. Though tracks like single “LUMBERJACK” and “LEMONHEAD” sound massive, with thundering beats and Tyler’s effortless flow, the album also gets inside Tyler’s head, with songs like “WILLSHIRE” and “‘BLESSED” exploring the artist’s psyche. Featuring contributions from Lil Uzi Vert, Jamie xx, DJ Drama and more, Call Me If You Get Lost is another standout entry in the already-illustrious career of the young auteur. —Jason Friedman

And don’t forget to check out… 2nd Grade: Wish You Were Here Tour Revisited, Anne Freeman: Keep It Close, Cautious Clay: Deadpan Love, Drug Church: Tawny EP, Hiatus Kaiyote: Mood Valiant, Hiss Golden Messenger: Quietly Blowing It, Ho99o9: Ho99o9 Presents Territory : Turf Talk Vol. 1, Hurry: Fake Ideas, John Grant: Boy From Michigan, Lightning Bug: A Color of the Sky, Maple Glider: To Enjoy is the Only Thing, MNDR: Hell to Be You Baby, Modest Mouse: The Golden Casket, Perila: How Much Time it is Between You and Me?, SPELLING: The Turning Wheel, Squirrel Flower: Planet (i)