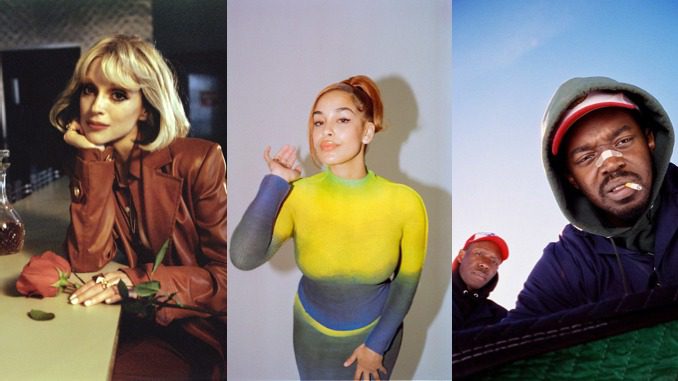 Many music fans would have you think today is St. Vincent Day, which, to be fair, it is. Annie Clark’s first new album since 2017 is out now, and that’s cause for excitement—but it’s also the tip of the New Music Friday iceberg, which also comprises compelling new releases from acclaimed British singer Jorja Smith, enigmatic Compton duo Paris Texas, London jazz supergroup Sons of Kemet, Bay Area rockers Pardoner and more. Check out all of the Paste Music team’s picks below.

Detroit hip-hop staple Danny Brown is slowly creating an empire, inspired by some of his most beloved labels, such as Suave House, No Limit and even Griselda. Under his label, Bruiser Brigade Records, comes TV62, whose namesake is inspired by WGPR, the first Black-owned television station in America that was marketed in Detroit. The album feels like flipping through television channels, capturing the small quirks that make each Bruiser Brigade act so unique. Shining star Bruiser Wolf glides over soul samples with his light-footed talk-rap and ridiculous double entendres such as “Life was intense like camping grounds” on the Black Noi$e-produced “Everything.” Fat Ray’s gruff delivery oozes braggadocio reminiscent of old New York radio staples, and newcomer J.U.S. spits like a seasoned emcee, with hidden rhymes and clever wordplay that requires a third or fourth listen to catch. Label head Brown is at his most unhinged, with “Dylon” bringing back his signature nasal delivery and “Welfare” channeling the spirit of the late Ol’ Dirty Bastard, unknowingly recorded on the legend’s birthday in an anecdote shared by Brown. The album is a testament to Brown’s keen ear for music just outside of mainstream earshot, and the camaraderie found throughout the record is very telling of a greater bond that’s less a shared label and more a tight-knit brotherhood. —Jade Gomez

Jorja Smith: Be Right Back

On her latest project, Be Right Back, Jorja Smith continues to show creative growth while simultaneously leaning into vulnerability more than ever. The theme of simplicity is palpable from start to finish. From one-word song titles to straightforward arrangements, Smith understands the power of austerity. While “Addicted” exemplifies desperation and yearning, tracks like “Gone” and “Time” celebrate introspection and showcase how naturally she can convey hefty emotion. Smith’s voice is impressively—and deceptively—malleable. One moment, it provides peace and serenity; the next, it’s tumultuous, sonorous and all-encompassing. —Candace McDuffie

Exceptional songwriting and fuzzy DIY rock sounds dominate Juliana Hatfield’s latest creation. Blood is bubbly and sweet while still being rough around the edges, with plenty of head-turning lines to boot. “I lost another friend to Jesus / She had nothing to believe in but the myth of redemption” and “I had to punch myself in the face to get myself out of bed” pop out against the kicking drum of “Nightmary,” and the self-deprecation in “Dead Weight” pulls at the heartstrings with lyrics like, “Why do you love me / You must be brain-damaged.” Hatfield’s initial come-up in the ‘80s and ‘90s can be felt in the raw energy of the record’s powerful guitars, but her position as an indie tastemaker holds strong today. —Carli Scolforo

LSDXOXO’s Dedicated 2 Disrespect brings the club to a digital space that can be carried in your pocket or blasted on Bluetooth speakers as the world approaches less-restrictive social gatherings. LSD’s debut on XL Recordings is a succinct one, capturing classic techno, house and Ghettotech into a four-track history lesson. It is a love letter to Black queer dance music, and LSD is the perfect person to write it. —Jade Gomez

The past few years have been full of reasons to fall apart, and Bay Area rockers Pardoner very nearly went that way. Max Freeland (vocals, guitar), Trey Flanigan (vocals, guitar) and River van den Berghe (drums) bonded over Yo La Tengo and Polvo in the San Francisco State University dorms, formed Pardoner, and released a pair of warm and fuzzy guitar-rock records. But when Freeland relocated to Vancouver, it appeared the band was also on its way out. Fortunately for us, Pardoner wobbled, but didn’t fall, adding an old friend in Colin Burris (bass), and reuniting in San Francisco to record Came Down Different, their third album and Bar/None Records debut, in a two-day spree with veteran hardcore producer Jack Shirley (Deafheaven, Jeff Rosenstock). Its music fit for these singular times: Right around the corner is a sunny, vaccinated summer, full of explosive celebration, but by no means free of simmering rage. Opener “Donna Said” melds rock of the noise and jangle varieties while documenting the draining demands of the music-industry rat race (“When you got feelings and guitar / You wanna trade it for cash”), while “Spike” moves a mile a minute to reflect its anti-exploitative sentiments (“Step up on some grapes / They want wine / They want twice the results / In half of the time”). These are songs about being cash-strapped, anonymous and squeezed dry by society (just like those grapes), but somehow having the last laugh all the same. “I’ve been destroyed by life / and I feel fucking good,” Freeland sings on “Broadway,” and you believe him on both counts. Throughout Came Down Different, Pardoner deliver barbed guitar rock that’s apocalyptic, yet nonchalant, like lighting a joint with a burning world. —Scott Russell

As a working musician, your goal, in a sense, is maximum exposure. You share your work and your story in the hopes that an audience will gather around to hear them, pouring yourself into your art so as to better connect with the listeners who make your pursuits possible. You welcome the world in and show them exactly who you are. For Compton duo Paris Texas, that kind of revelation is the exception, not the rule. Yet the gambit works: The mysteries of the duo’s genre-defying, self-produced debut project only heighten its intrigue, imbuing BOY ANONYMOUS with a sense of boundless possibility. At eight tracks, BOY ANONYMOUS is not quite an album, nor is it an EP—it’s not quite hip-hop, nor is it rock or pop, though elements of all three genres are all over it. This is exactly as Paris Texas intended: “Categories make things comfortable for our lil lizard brains,” Louie Pastel acknowledged on Instagram in announcing the band’s debut. “But this project we kinda embraced the ideal of not knowing exactly who or what we are, hence the name: BOY ANONYMOUS.” Like shadows looming large on a wall, the music is amplified by its mystery—the duo’s stylistic versatility makes them seem capable of almost anything.—Scott Russell

Sara Bug’s self-titled debut brings a gentle country twang to her subdued brand of indie. Bug’s voice is light and pure throughout, with its sparse production maintaining the delicate effect. From the lullaby style of “Doo Doo Song” to the hazy sunshine of “Ride on Sundys,” it’s a joy to see Bug let loose after working on her debut for nearly seven years. While the insecurity that comes from comparing herself to other acts put a delay on the record’s production, the result is fresh, bright and perfect for the start of the summer. —Carli Scolforo

Sons of Kemet: Black to the Future

With Black to the Future, U.K.-based jazz supergroup Sons of Kemet are following up nothing less than a Mercury Prize-nominated effort in 2018’s Your Queen Is a Reptile. Shabaka Hutchings (composer, sax, clarinet) helms a band featuring tuba player Theon Cross, and dual drummers Tom Skinner and Eddie Hick, and the Sons welcome a variety of collaborators on their latest, including Lianne La Havas, Moor Mother, Angel Bat Dawid, Kojey Radical, D Double E and poet Joshua Idehen. Bandleader Hutchings calls the album “a sonic poem for the invocation of power, remembrance and healing” that “depicts a movement to redefine and reaffirm what it means to strive for Black power.” You could also describe it as a towering hour of Afrofuturist jazz, haunting on “Field Negus,” hungry on “Hustle,” righteously furious on “Black,” visionary and virtuosic everywhere. —Scott Russell

Daddy’s Home is an album based around Annie Clark’s relationship with her father, thick with ‘70s licks and thrums. Clark is an endlessly self-assured performer; her bite and control compel even when the album goes astray. Whether she’s wearing a stiletto or cleat, she’ll stomp hard. Daddy’s Home is no exception. The album flickers between dreamy jams and ‘70s ballads, between horn-filled funk and soul backup singers. The first track, “Pay Your Way in Pain,” funky and choral, shows what the album could have been: trippy, upbeat. It’s also a stage-setter, a pseudo-apocalyptic, neurotic prologue (“The show is only gettin’ started / The road is feelin’ like a pothole”). Most of the following songs are far more tame, a mix of bluesy ballads and psychedelic, sprawling crooners. What makes the album fun is Clark’s tendency toward the theatrical—sharp breath, shouts, radio distortion, horns. Daddy’s Home brings us a far moodier, expansive work than predecessor MASSEDUCTION; it begs us to sit and listen, calling back to the slow-burn complexity of Strange Mercy. Whether this funk-soul hybrid persists in St. Vincent’s next work is immaterial; it’s the array of tenderness, cruelty and authority that will bring us back again. —Caitlin Wolper

French singer/songwriter and producer Ta-Ra has shared her latest project STARFLOW, a sleek half-hour of future R&B that feels like it belongs among its titular celestial bodies. Ta-Ra’s glossy vocals glide over ribcage-rattling bass, prismatic synths and incisive trap drums on tracks like “FIREBIRD” and “$tA,” soothing even as her tracks invigorate, and she goes entirely ambient on “INTELLIGENT INFINITE BEING,” embracing the spacey with both arms. Discussing the inspiration for the record on her Tumblr, the artist describes an unseen cosmic energy connecting all things—flowing through the stars. Her new album is as good a piece of evidence for that as any. —Scott Russell