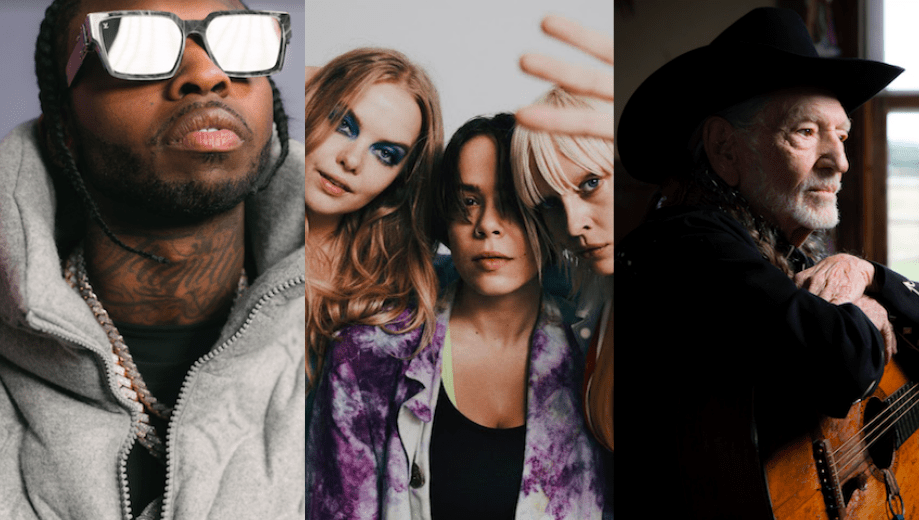 Fourth of July weekends usually include barbecues, family and friends and music, but this year’s holiday is obviously an abnormal occasion. We highly encourage you to avoid large gatherings and wear masks and practice social distancing instead, but one thing you can still enjoy this holiday is the music. Today’s New Music Friday features the long-awaited posthumous debut album from Pop Smoke, the 70th (!!!) studio album from country legend Willie Nelson, a covers EP from Father John Misty and more. Scroll down for 10 essential releases out today.

boygenius—the collaborative project of Phoebe Bridgers, Lucy Dacus and Julien Baker—have released demos from their self-titled 2018 EP on Bandcamp. The demos for “Bite the Hand,” “Me & My Dog” and “Stay Down” will be up for 24 hours. Baker’s donations will go to OUTMemphis, Bridgers’ to Downtown Women’s Center and Dacus’ to Mutual Aid Disaster Relief Richmond. —Danielle Chelosky

Dream Wife’s sophomore record So When You Gonna… is noticeably less fiery than their debut, though you wouldn’t guess that from the first track, “Sports!,” which comes out the gate at full speed. The videogame-inspired bridge and the Garfunkel and Oates-esque line “These are the rules / Sports!” are just a few elements that make it one of the best songs on the album. The momentum dissipates fairly quickly into the album, though some of the energy from their debut peeks through on the title track and the live-while-we’re-young banger “RH RN.” While the all-or-nothing feeling of the first record is missed, the progression makes sense. Dream Wife was the sound of being young, of kissing strangers (“Let’s Make Out”) and endless summers (“Kids”). Now that the members of Dream Wife are a bit more grown up, their musical choices reflect that. It’s a trite observation about a sophomore album, but cliches become those for a reason: They’re true again and again. The band members are slightly less rash, though the songs are still punctuated by angular guitar and Mjöll’s shrieks that would give Poly Styrene a run for her money. —Clare Martin

Father John Misty has released a digital EP, Anthem +3, which includes covers of Leonard Cohen, Yusuf/Cat Stevens and Link Wray. It’s available now as part of Bandcamp’s “No Revenue Share Day,” and will be released widely via Sub Pop on July 14. Recorded only a few weeks ago at producer Jonathan Wilson’s Fivestar Studios in Topanga, California, the EP includes covers of Cohen’s “Anthem” and “One Of Us Cannot Be Wrong,” Wray’s “Fallin’ Rain” and Stevens’ “Trouble.” Proceeds from the EP will go to CARE Action, a humanitarian organization fighting global poverty, and Ground Game LA, an organization dedicated to building power for the residents of LA. —Lia Pikus

Toronto indie-folk outfit Little Kid have shared their latest full-length via Brooklyn label Solitaire Recordings. Melding classic folk with pining indie rock and religious undertones, Little Kid makes music for earnest stargazing and tearing up at the kitchen table. “In my mind, the Transfiguration Highway is a road that runs from my hometown of Petrolia, through the small southern Ontario towns I grew up in, through to larger and larger Ontario cities, like London, until it reaches me here in Toronto.” says songwriter Kenny Boothby. “Along that path, there’s a movement from quiet to loud. From slow to fast. From God to godlessness. From unique and charming houses to mundane condos. The path then stretches on to the north and to the east to Marmora, a place I’ve never visited but one that I’ve become entranced by. I’ve come to view it as some kind of beckoning light further down the highway…” —Lizzie Manno

6. Pop Smoke: Shoot for the Stars, Aim for the Moon

The late Brooklyn rapper Pop Smoke has shared his posthumous debut album, Shoot for the Stars, Aim for the Moon, which follows the release of his mixtapes Meet the Woo and Meet the Woo 2. The rising hip-hop star was working on this album at the time of his passing, and his closest collaborators completed it, in order to release it in the summer as the rapper had planned. —Lizzie Manno

7. PUP: Live at the Electric Ballroom

Toronto pop-punk outfit PUP have released a new live album, Live at the Electric Ballroom, for one day only on this Bandcamp Friday. The album was recorded in London last year at The Electric Ballroom while the band was on tour for their 2019 release, Morbid Stuff. “We never planned on putting these recordings out, because we expected them to suck,” PUP said in a statement. “They were mostly just for ourselves, to mark what we considered to be a pretty big moment in our careers. But turns out, they suck a bit less than we expected. So in typical PUP fashion we made a plan to release them in a self-sabotaging, stupid way. The record will be sold for one day only. After that, it’s gone.” 50% of the record’s proceeds will be donated to Critical Resistance and Breakaway Addiction Services in Toronto. —Danielle Chelosky

Chicago indie rockers Twin Peaks are back with a new EP called Side A, which was completed after the COVID-19 lockdown and features the lead single “What’s The Matter.” Along with this EP, the band has released a T-shirt with proceeds going to Black Lives Matter Chicago. Order one here. The EP features other Chicago-based artists like Lala Lala, Ohmme and more. —Danielle Chelosky

Paste
named Westside Gunn’s recent LP, Pray For Paris, as one of the best hip-hop albums of 2020 so far. Now, the Buffalo, N.Y. rapper has shared a new mixtape, FLYGOD Is An Awesome GOD II—the sequel to 2019’s FLYGOD Is An Awesome God. The 14-track mixtape features Griselda’s Benny the Butcher, Keisha Plum, Boldy James, Daringer and more. —Lizzie Manno

Legendary folk/country singer Willie Nelson has released his 70th solo album, First Rose of Spring, at the age of 87. First Rose of Spring is Nelson’s 14th album released through the label Legacy Recordings, with which he has been affiliated since 2012. Nelson’s previous album, last year’s Ride Me Back Home, won him a Grammy for Best Country Solo Performance at the 62nd Grammy Awards. —Natalia Keogan