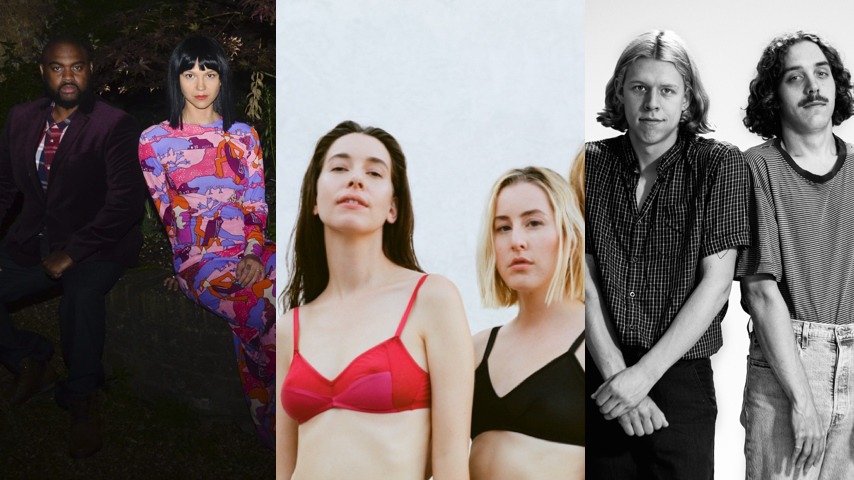 New Music Friday is one of the only things we have to look forward to these days, and thankfully today brings an eclectic but exciting mix of new albums. D.C. punks Bad Moves finally share their new record Untenable, sister pop-rock trio HAIM return with their third and best album yet and psych-rock group Khruangbin bring lyrics into the fold for the first time on Mordechai. There’s also a John Hartford tribute record, folk fusion project courtesy of North Carolina’s The Dead Tongues and the long-awaited debut album from country star Tenille Townes. No matter what you’re planning to listen to first, we hope you have a great New Music Friday. Enjoy our recommendations below.

Overtly romantic songs like “No Queda Nada” (“Nothing Remains”) and the reverbed piano soundscapes of “Calor” (“Heat”), are, at least compared to Arca, rare on KiCk i. Alejandra Ghersi instead spends most of the album gently softening the corrosive distortion of her pre-Arca output, upgrading the delirious and vividly entertaining vocal distortion and delivery of her first two EPs, wrapping her cyborg arms all the way around straight-up pop music, and dismantling outdated gender norms from within. —Max Freedman

Becca Mancari returns today with her new album The Greatest Part. Mancari explores her childhood experiences on the single “First Time,” and it focuses on her religious upbringing. The lyrics are raw and intrepid, peeling back old scars to explore the emotional and psychological turmoil Mancari weathered growing up gay in a fundamentalist Christian home, while at the same time examining the ties that continue to bind her to the family she loves. The instrumentals echo hesitantly until the steady guitar solo offers something concrete in all her wandering. The music video then cuts to shots of same-sex couples, symbolizing that she found chosen family with people like her. —Jarrod Johnson II

North Carolinian folk-fusion artist Ryan Gustafson (who performs under the alias The Dead Tongues) today releases his latest album Transmigration Blues via the Durham-based label Psychic Hotline. The news arrived last month with the lead single, “Peaceful Ambassador.” Gustafson is thoroughly rooted in the North Carolina scene, having previously served as guitarist for both Phil Cook and Hiss Golden Messenger. He also counts Mandolin Orange and Mountain Man as friends. He recorded Transmigration Blues, his fourth album, during summer 2019 in the midst of a bout of depression. But the record doesn’t only promise gloom. ”’Transmigration Blues’ belongs to the moments weaving between uncertainty and discovery,” he says of the release. —Ellen Johnson

Like so many other artists who had plans to release music in 2020, HAIM pushed back the planned release date for their new album Women In Music Pt. III from April 24 to June 26, due to coronavirus concerns. While fans may not be thrilled with the delay, the extra time has allowed the band to share a few extra singles, including “I Know Alone,” whose music video included a now fan-favorite sequence of choreography (The band even offered dance lessons on their Instagram!), and the funky “Don’t Wanna.” With a larger fan base than ever before and a greater sense of their own sonic sensibilities as an album band—not just a band with one great album—HAIM seem poised to release another critical darling, and, if nothing else, a dynamic and honest offering that exemplifies their graceful rise to dynamite rock group. —Ellen Johnson

Khruangbin is a different type of jam band. Across their first two LPs, the Houston trio have made largely instrumental music that feels like a journey through the worlds of Thai soul, Jamaican dub, Middle Eastern funk and more. But now on Mordechai, the group looks to distill their global fusion of sounds with lyrics woven throughout the album for the first time. Coming off of their fantastic Texas Sun collaborative EP with fellow Texan Leon Bridges earlier this year, their lyrics on Mordechai represent a spiritual awakening of sorts for singer/bassist Laura Lee Ochoa. Travel and discovery through music has always been at the center of what Khruangbin creates, and Mordechai promises to be another step in the voyage. —Adrian Spinelli

Pottery’s debut EP, No. 1, made our mid-year best post-punk list last year thanks to its bluesy, funky take on post-punk. This coming Friday (June 26), the Montreal five-piece are unleashing their first full-length, and it’s even more eccentric than we were expecting (or hoping). It’s full of psych-punk jams so surreal and danceable that falling down their wormhole and grooving to the beat are not optional. Make sure you polish off your dancing shoes before diving into its off-the-wall percussion and snappy guitars. Their sky-high dance-punk and witty psychedelia can hardly pack more tightly-coiled zip. —Lizzie Manno

8. Remo Drive: A Portrait of An Ugly Man

Bloomington, Minn. indie duo Remo Drive have unveiled their third LP A Portrait of An Ugly Man. “Ode to Joy 2,” a single from the album, is an edgy ballad inspired by alcohol, and the accompanying video is the visual representation of that fun drunken Friday night in the backseat of your friend’s car. “The lyrics were inspired by the excess I perceived around me as I transitioned from being a college student into touring full time,” says vocalist Erik Paulson. “Most people who’ve done either can confirm that many social interactions are built around having a drink or smoking weed. Once the honeymoon period of exploration was over for me, I became frustrated with the omnipresence of drugs and alcohol and wanted to write about it.” The song has the same jaded sound as their last record Natural, Everyday Degradation, which was heavily imbued with nihilism. It seems like the hedonistic days of their debut, Greatest Hits, are already over. —Danielle Chelosky

Tenille Townes. The Canadian-born country singer/songwriter and musician, first reached our ears a few years ago with the arrival of her hit song “Somebody’s Daughter,” which landed on many best-of-the-year lists. Her debut album The Lemonade Stand is finally here, after releasing a preliminary EP earlier this year, The Road to the Lemonade Stand. “The Lemonade Stand is a collection of songs that mean so much to me and are the way I see the world in this season of my life right now,” Townes said in a statement. “I want this music to be like a gathering place, where people can come and be filled up. I hope this record reminds people of who they are, that they are not alone, and reminds them of their dreams. This record is the dream that I had when I was a seven-year-old kid singing along in the backseat of the car. She would really be freaking out right now.” —Ellen Johnson

10. Various Artists: On The Road: A Tribute To John Hartford