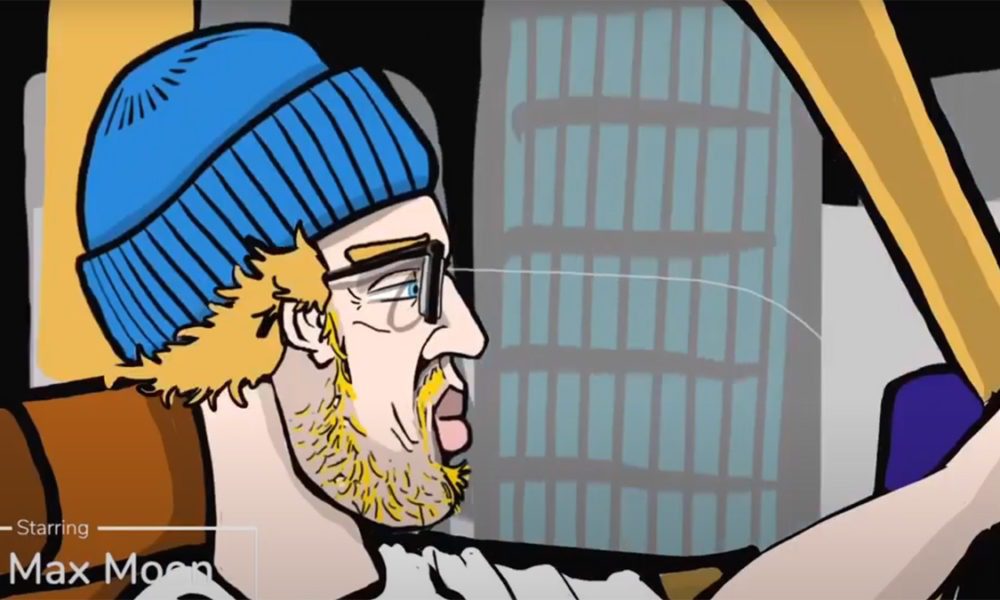 Magick Show is a rap duo out of Sudbury, ON, combining the distinct styles of working class poet Mickey O’Brien and lyrical/sonic explorer Max Moon. Today, the group releases their outlandish, animated video for the Moka Only-assisted “OZ,” in support of their album, Dark Night of the Soul.

In the beginning, the two artists were energized by the common goal of creating the world’s rawest, most dynamic, horror-tinged rap record. An abrasive departure from their solo projects, Dark Night of the Soul was released in October via Hand’Solo Records, securing the duo charting positions on campus radio charts and spots opening for Madchild (Swollen Members) on his tour through Northern Ontario. Despite the challenges of making, promoting, and performing music during COVID-19, the record continues to find an enthusiastic audience – those appreciating hard-hitting rap music with a macabre/mystical tone.

The release of the “OZ” video (created by Baked Clown Animation), marks the duo’s wildest and most timely release yet. The pair timed the release to mark the departure of Donald Trump as U.S. president and respond to the political mayhem south of the border. It’s a bad (yet thoroughly entertaining) acid trip through the worst and most ridiculous elements of 2020 (a.k.a. the worst year ever).

In this nightmarish OZ-like world, fiction and reality blend, as a small faction of resistors try to navigate back toward a more logical and stable world. An all-star caricature cast of public figures and weirdos appears throughout the video, including none other than: Trump, Joe Biden, Rudy Giuliani, Joe Rogan, Alex Jones, Vladimir Putin, David Icke, Jesse Ventura, “Rowdy” Roddy Piper, George Soros, Ben Shapiro, the Hodge twins, the mysterious monoliths, and more.

“Now you’re F%$#&ed / Didn’t know what you had / Now the whole Earth is scorched by your trembling hands / Now a bunch of factions just roam through the land / And peace is no longer something that we understand / Let’s put the metaphor aside for a minute/ And recognize we’re only two degrees away from swimmin’ in it…” – Max Moon on Magick Show’s “OZ.”

“OZ” is the final track on the Dark Night of the Soul album, which takes a step outside of the horror-mystic aesthetic to focus more on the true horrors in the world – disinformation and a lack of concern for truth perpetrated by the greed of the political/financial elite, and very often the alt-right. The rappers fast-forward through the years (but they don’t travel far) to imagine a post-apocalyptic scene where might is right, scarcity is common, and the marginalized are constantly on the brink of survival. They take a moment to take specific aim at QAnon conspiracy theorists, devoted Trump supporters, and systemic racism – but it doesn’t stop there, no exploiter is safe! The track is produced by Juno nominated producer and Sound Battle Royale champion Fresh Kils, with scratching by turntable renegade DJ Slam!.

“All hail the puppet at the podium / In human husk, smell sulphur musk / In false gods we trust / As long as guns still get to bust / Illuminati, right-wing, conspiracy nuts / White-washed conservatives eat that pizzagate up / The ‘[email protected]’ – not new, divide and conquer, cause panic / It’s systematic, the working class enslaved by fascists / Doublespeak, Orwellian animal farm, ring the alarm / Before the man with spray-tan drops the mother of all bombs!” – Mickey O’Brien on Magick Show’s “OZ.”

Canadian hip-hop innovator Moka Only (Swollen Members, Len, Ron Contour, Torch) lends his smooth, iconic voice and lyrics to the hook on “OZ,” tying together this strange and jarring journey. Moka works as a multi-faceted artist, and has been writing, producing, and creating relentlessly since the late nineties. He has celebrated acknowledgment through a 2015 WCMA rap recording of the year nomination, and three Canadian Urban Television nods. As co-founder of the collective rap group Swollen Members, his successes garnered him three Juno Awards, seven platinum plaques, and seven MMVAs. He has also collaborated with hip-hop legends such as MF Doom, J Dilla, and Grand Puba, and has toured internationally with artists such as Tanya Morgan and ILLA J, to name a few.

“It was super cool to connect with Moka, in the middle of a pandemic, to collaborate on this track,” says Mickey O’Brien.

“His work ethic as an artist is unreal – he had tracks back to us in a few days with multiple vocal parts and ideas. A true artist for sure.”

Moka Only is also an alumni of Hand’Solo Records, the label behind the Dark Night of the Soul album. Hand’Solo Records has been releasing Canadian hip-hop since 1996 when they debuted with Bassments of Badmen, a compilation of Halifax hip-hop featuring now acclaimed artists such as Buck 65, Sixtoo, Classified, and more. Since then they have released vinyl, cassettes and CDs with some of the best in the Canadian and worldwide hip-hop community. The current roster includes Backburner, Chokeules, Touch, The Dirty Sample, Ultra Magnus, Mickey O’Brien and Magick Show.

Dark Night of the Soul is available for streaming and download on all major platforms, with special edition vinyl, cassette and digital packages available through the Hand’Solo Records Bandcamp page.