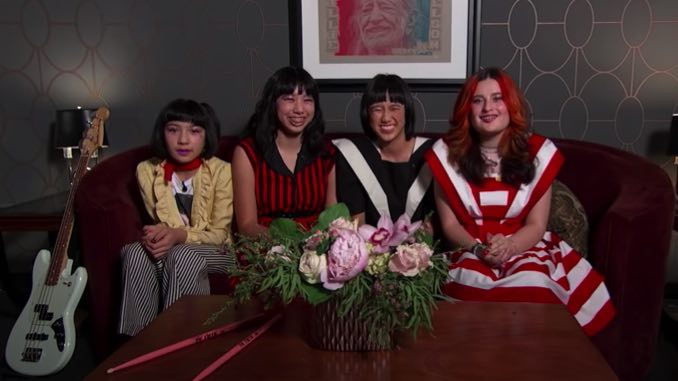 It’s been a whirlwind few weeks for The Linda Lindas, the Los Angeles-based, teen punk quartet whose performance of “Racist, Sexist Boy” at the L.A. Public Library caught fire on the internet, drawing more than 4 million views on Twitter and cementing their signing to Epitaph Records just days later. Thursday night, the band made their national TV debut on Jimmy Kimmel Live!, performing their signature song, as well as a new track titled “Claudia Kishi,” and talking to Kimmel about their rise to near-instant stardom.

The four-piece—vocalist/guitarist Lucia, age 14; her 10-year-old (!!) sister, vocalist/drummer Mila; their 13-year-old cousin, vocalist/bassist Eloise; and their longtime, 16-year-old friend, vocalist/guitarist Bela—told Kimmel about the origins of their band name (a reference to Nobuhiro Yamashita’s 2005 film Linda Linda Linda), the story behind “Racist, Sexist Boy,” what it was like to go viral, and the racist, sexist boy himself (who they, unsurprisingly, have not kept in touch with).

“We knew the song would get a good reaction, but we never imagined this,” said Eloise in a statement when the band signed to Epitaph. “Even though we started the band for fun, now it feels we can actually make a difference with what we’re doing.”

Watch The Linda Lindas’ Kimmel set below and stay tuned for more from the band. You can revisit their viral “Racist, Sexist Boy” performance right here.