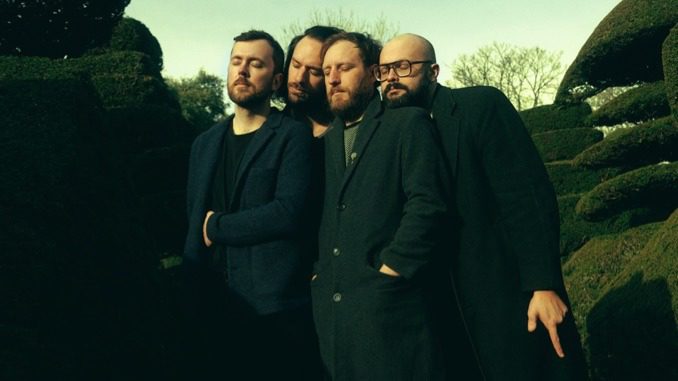 London post-punk outfit TV Priest announced the follow-up to their debut album Uppers, My Other People (out June 17 on Sub Pop), back in March. Today (April 27), “Limehouse Cut” joins prior singles “One Easy Thing” and “Bury Me In My Shoes” as an early look at what we can expect from the record, arriving with a visualizer directed, edited and produced by Al Redux.

“Limehouse Cut” sees the band take a reflective pause, especially compared to the rush of urgency driving the first two singles, expressing the stifling, occasionally time-bending experience of living in an urban environment. Over humming strings that swell and recede to join a steady bass line and the constant loop of spiky staccato guitar, vocalist Charlie Drinkwater yearns to live as one with the natural world between vignettes of fast-paced life in London. “Follow me down to the seashore / Follow me and we can wash in the waves,” he offers in the chorus before the dreamy strings wash away again and he’s faced with his boxed-in, aimless reality: “And this time is not our lover / Nor our jailer, our consoler / We’ve been walking under ladders / We’ve been steering without rudders / We’ve seen buildings go up in an instant.” The skittish gray of the verses blossoms into a vision of hope with every refrain, creating an unassuming but deeply felt portrait of feeling stuck and not knowing where to turn in order to free yourself.

“The song is about a feeling dislocated and displaced in an urban space you once felt you knew and ‘understood,’” Drinkwater said about the track in a statement, “however, it’s also a coming to terms with an idea that you never really ‘own’ somewhere as infinitely regenerative as a city. It’s a bit of a psycho-geographical study, a little bit of pathos at my own mortality and smallness in the great tide of history. We loved the idea of something quite abstract, something that references landscape, feels mesmeric, melancholic, a little sinister but also quite beautiful.”

The band have also announced their first-ever North American tour, kicking off on July 26 at Brooklyn’s Union Pool and wrapping up on Aug. 7 in Seattle at Clock-Out Lounge. The tour takes place between a bunch of shows throughout the U.K. and Europe, which begin in Liverpool on May 1 and will continue on and off through the rest of the year until the tour officially wraps in Brighton on Nov. 13.

You can check out the visualizer for “Limehouse Cut” below, and keep scrolling to see a full list of TV Priest’s tour dates. You can preorder My Other People here.