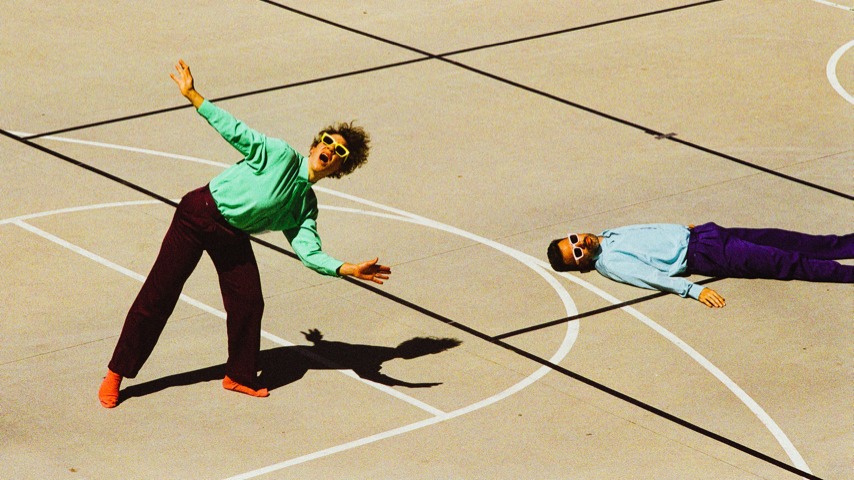 Merrill Garbus and Nate Brenner dipped a toe into a third decade of their art-pop project Tune-Yards with the September 2020 release of “nowhere, man,” and apparently decided the water was fine. The Oakland-based band have announced their fifth studio album sketchy. (out March 26 on 4AD), also sharing new single and video “hold yourself.” (Only for the band who made w h o k i l l will we suffer such formatting.)

The second preview of Tune-Yards’ latest LP after the glitched-out funk of “nowhere, man,” “hold yourself.” is more downtempo, starting out with smooth instrumentation that belies its caustic lyrics. “This song is about feeling really betrayed, by my parents’ generation, and at the same time, really seeing how we are betraying the future,” Garbus explains in a statement. Her lyrics are painfully direct: “Child, I won’t have you / I cannot have you / Child, I won’t have you / and I’m telling you why,” she sings. The synth- and sax-driven track whipsaws between despair and empowerment, embracing self-sufficiency while condemning the scary, infuriating world that makes independence so important, and building to a chaotic climax—just like society might!

sketchy. most recently follows Tune-Yards’ 2019 score for Boots Riley’s singular, LaKeith Stanfield-starring film Sorry to Bother You. The band’s last proper album was 2018’s I Can Feel You Creep Into My Private Life, which earned a generally positive, if somewhat mixed response. A press release characterizes the record as “a self-reflexive question mark at the end of a decade of outspoken, polyphonic indie music,” whereas sketchy. “balances self-inspection and reflection with bombastic rallying cries, reminiscent of the furious tones of early days Tune-Yards.”

Watch the animated “hold yourself.” video (dir. Basa Studio) below and find the details of sketchy. further down. You can preorder the record right here.