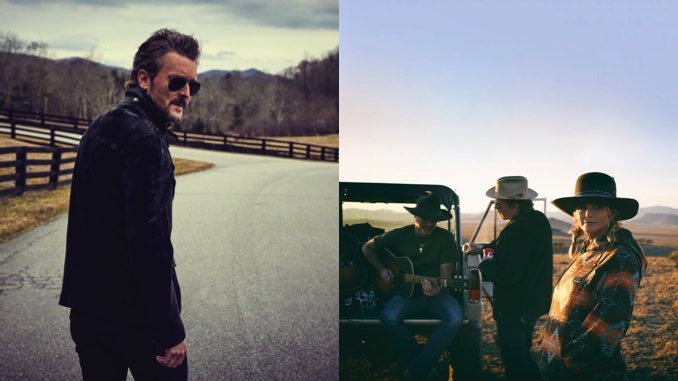 This spring, Eric Church and Miranda Lambert, two of the biggest stars on country radio, released recklessly ambitious albums, projects far outside the standard operating procedure of Nashville’s Music Row. These records were such welcome surprises that it prompts one to ask why more famous musicians don’t spend their “celebrity capital” this way.

“Political capital” is a term that political scientists use to describe the blend of power and popularity that enables certain figures to get things done. If you were popular enough to win the last election and to be favored for the next, politicians and voters are more likely to support your riskier ventures against fierce opposition, because they want to stay on your good side.

“Celebrity capital” describes the analogous dynamic in arts and entertainment. If you have sold enough tickets and/or products, won enough awards and media coverage, companies and audiences are more likely to support your dodgier projects, no matter how unlikely they seem.

But here’s the thing about capital—political, celebrity or financial—it’s only valuable if you spend it. If it just sits under your mattress or in a savings account, it’s dead wealth, taken out of circulation and eaten up by inflation. If you simply reinvest it to create even more capital, what’s the point, if you never put it to use? Why did you do all that hard work getting elected, getting famous or getting rich if you’re not going to spend your capital on something you want, something that might be remembered?

After getting elected as president in a landslide, Lyndon Johnson spent his political capital on Civil Rights bills and Medicare. It cost the Democratic Party the South for two generations, but it was the greatest expansion of democracy in the U.S. since female suffrage. Barack Obama spent his capital on passing Obamacare. It cost the Democratic Party control of Congress, but it was the greatest improvement in American public health since Medicare.

In the late 1960s, the Beatles and Bob Dylan were two of the biggest acts in rock ‘n’ roll. They spent their celebrity capital on the ornate art-rock of Sergeant Pepper and the stripped-down country-folk of John Wesley Harding. It was capital well spent.

That’s why it was so heartening to see Church and Lambert demand that their record labels release such unconventional projects. Church’s Heart & Soul is a three-LP, 24-track boxset initially released as two albums on two separate dates as Heart and Soul, with the third album, &, released only to the Church Choir fan club.

Written and recorded in North Carolina during the pandemic, it includes every kind of music Church is interested in, from country-pop to Southern rock, from country-blues to singer/songwriter ballads. More importantly, it sounds as if Church finally stopped worrying about radio formats and just sang and played what he wanted, as if he were Jason Isbell or something.

Lambert joins her co-songwriters and co-singers Jack Ingram and Jon Randall on the album The Marfa Tapes, a two-LP, 15-track gatefold album. Named after the legendary West Texas town where the songs were penned, the album was taped outdoors there, with only the three principals on acoustic guitars and vocals. The off-the-cuff, demo-like performances are the antithesis of country radio’s overproduced, arena-rock bombast. It’s as if Lambert had decided to release her version of Bruce Springsteen’s Nebraska.

What the Church and Lambert albums share is a willingness to take some time off from trying to please radio programmers and to please themselves for once. Both artists have been experts of testing the tolerance of those programmers and getting some truly creative work on the air. They may very well go back to that game of pushing the limits of mainstream country as far as they can without going too far. But this year, they’re taking a break from such tightrope-walking.

The first single off the Church set was last year’s “Stick That in Your Country Song,” an inventory of all the topics that he’d been discouraged from singing about on his earlier records: urban poverty, racial disparities, gun violence, maimed veterans and underpaid government workers. The verses are cabin-porch meditation—acoustic guitar and conversational singing—but the choruses add rock guitar and backing singers to hammer home the challenge: “Stick that in your country song, take that one to number one.” Predictably, it only made it to #23 on the country charts.

Though he sings it with conviction, Church didn’t write that one, but he did write or co-write 22 of the 24 songs on this set. His second #1 country single, back in 2012, was “Springsteen,” an ode to the hero of his adolescence. Heart & Soul seems to suggest what The River might have sounded like if Springsteen had grown up not in coastal New Jersey, but in Church’s hometown in the North Carolina mountains. Like The River, Heart & Soul is an expansive tableau that includes self-effacing humor, angry politics, small-town rebellion, restless car rides and difficult romantic situations.

Church’s song “Russian Roulette” refers not to the suicidal pistol game, but to the late-night pastime of spinning the dial on a car radio in search of a song that might fit the driver’s mood. Like most of these songs, this one begins with an acoustic-guitar figure that is gradually joined by an array of other instruments. The tune’s narrator is heading southwest on Interstate 85, out of North Carolina towards Alabama, and he’s looking for something new from the radio. “I need a melody without a memory,” he says; “Take me where I’ve never been.”

That’s a request that terrestrial country radio seldom satisfies, so Church cooks up a sprawling smorgasbord of offerings. The set begins with three uptempo car songs, Dixie-fried versions of “Born To Run.” That’s followed by a clutch of broken-hearted laments. “Love Shine Down” is a slinky, bluesy version of an old folk song where the first and last line of each stanza are the same.

“Hell of a View,” the album’s #2 country single, is a celebration of taking chances and busting out of a predictable, small-town life. “Bad Mother Trucker” is a funky-shuffle salute to a female truck driver who can not only handle “an ’81 Peterbilt 18-wheeler, jet black with pink mud flaps,” but can also wave as she’s passing you on the interstate.

Church is unafraid to wade into the messiness of American race relations. “Rock & Roll Found Me” is the story of “a skinny little white kid, wrong side of the tracks” who is saved from a dead-end life on “a dead-end street” by music. And what music was it? It was an African-American guitarist playing “Ode to Billie Joe,” a song written by a white woman, Bobbie Gentry, but influenced by decades of Black song.

Things get messier still on “Lynyrd Skynyrd Jones,” the story of a boy born to a white mother and a Black father who met at Skynyrd show in Tallahassee. The mother raised the boy alone, and the son found salvation in a pawnshop guitar. It was only at his mama’s funeral that he finally met his father: Curtis Loew, the African-American guitarist from a Lynyrd Skynyrd song.

Perhaps the bravest song in the collection is “People Break.” In a country-music era when most songs suggest that every relationship can be mended if you just try hard enough, here’s a song that acknowledges that some romances are simply beyond repair. Over a pretty acoustic-guitar figure and drum brushes, Church deadpans, “Someone leaves; love dies.” What’s worse, sometimes it’s you who has to end it. “Now I gotta do the hardest part,” he reluctantly sings, “break the news to a broken heart.”

Randall sings a similar song on The Marfa Tapes. “Everybody’s losing something they can’t get back,” he confesses helplessly over his own minimalist guitar part. The only comfort he can find in the dry, desert air of West Texas is having Lambert and Ingram join in agreement on the chorus: “I don’t know if the hardest part is being heartbroken or breaking a heart.”

Jay Joyce, who has produced all of Church’s albums, including Heart & Soul, also produced Lambert’s last studio album, 2019’s Wildcard. But The Marfa Tapes doesn’t list a producer, because engineer Brandon Bell just set up two mics and let the three friends gather in a circle as they did when first writing these songs—and all 15 are credited to all three of them.

One of those is “Tequila Does,” a single from Wildcard. The original version got the full Nashville treatment: great playing and a big, joyful vocal from Lambert. The lyrics claim that the narrator has found tequila to be a more reliable and more satisfying companion than any man she’s ever known. The big studio version punches up the punch lines and invites singing along. By contrast, the Marfa version is a bit sloppy and giggly, as if Lambert has been sampling the song’s title product. But something remarkable happens: The melancholy beneath the joke comes out as never before, and it becomes a whole new song. How sad to prefer a bottle of alcohol to a flesh-and-blood lover.

Lambert sings lead on eight of the 15 songs, and while her previous vocals have often been more impressive technically, seldom have they been this emotionally revealing. The album’s opening track and first single is “In His Arms,” a mere skeleton of a lyric about all the towns in Texas where her ex-lover might be, but the longing in the refrain, “I wish I was in his arms tonight,” is so aching that the effect is devastating.

She likewise brings out the sadness beneath “Tin Men,” her #15 country single from 2017. Her counterpart to Church’s car songs is “Waxahachie,” which opens with the terrific couplet, “Nobody ever left New Orleans as mad as I was / I wrote a lipstick letter on the mirror with a bourbon buzz.” Driving all night on Interstate 10, she’s kept awake by a desperate hunger for the comfort and consolation of the Texas hometown she was once so eager to leave.

Randall and Ingram, her partners in crime, have their moments. Randall pays rambunctious tribute to his hero Guy Clark on “Homegrown Tomatoes,” a new song that borrows its title from one of Clark’s. Ingram nicely understates the love song, “I Don’t Like It.” Randall fuses two of country music’s great traditions—the cheating song and the awful-pun song—into a single number: “Am I Right or Amarillo?”

In the end, though, Lambert dominates the proceedings. Most of these songs were written during the purgatory between her first marriage and her second, and they capture the anger, sadness and eventual acceptance of that transition period. Perhaps the best of those songs is “Ghost,” which begins, “I burned your Levi’s and your pearl-snap shirts / Ashes to ashes and dirt to dirt.” The more she insists that her love is dead, the more she sounds as if she’s trying to convince herself as much as us. Only at the end of the song does she sound confident that her ex is just a ghost. “And I ain’t afraid of ghosts,” she sings.

And she ain’t afraid of Music Row. She paid her dues and racked up the hits and awards. Now she’s spent some of that celebrity capital and pushed RCA to release a bunch of campfire songs. It was a smart investment, for this is some of her best music. Her fellow CMA winners would be wise to follow her example.