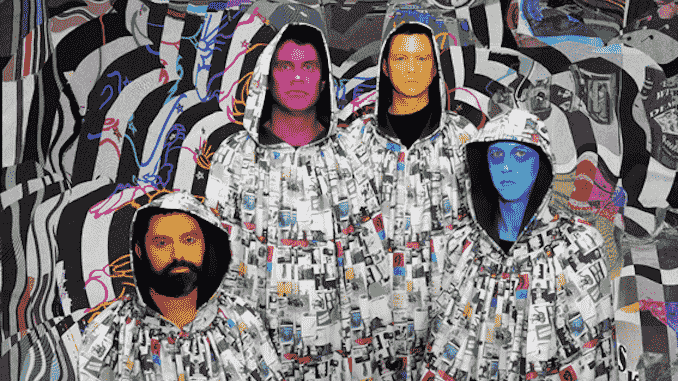 As everyone prepares for Halloween next weekend (have you figured out what cookies you’re leaving out for Mothman?), Paste hopes you have a little bandwidth left between Shaky Knees and the excitement of a new Animal Collective album to check out some of our favorite songs of the week. Strange Ranger echoes back to the electronic-tinged rock of the ‘90s, and Anjimile’s beautiful vulnerability shines through on his latest single to celebrate signing onto 4AD. This list is short, sweet and to the point. Find your new favorite song today courtesy of your spooky friends at Paste.

Nature is healing. Animal Collective (not to be confused with the pandemic-saving game franchise Animal Crossing) have announced their forthcoming album, Time Skiffs, out Feb. 4, 2022, via Domino. The album arrives six years after 2016’s Painting With. The album is accompanied by lead single “Prester John,” a kaleidoscopic fever dream sitting at just over six minutes. Part indie rock, part jazz, the song is an exercise in patience as it grows with steady drums and harmonies. The track was conceived by weaving together two songs, one written by Avey Tare and another written by Panda Bear. —Jade Gomez

Anjimile Chithambo, known as Anjimile, has announced his signing to London-based independent label 4AD. The Dallas, Texas-born folk artist joins a powerful roster featuring some Paste favorites such as Big Thief, Deerhunter and The National. On Oct. 19, Anjimile shared “Stranger,” a powerful single to mark his debut on the legendary label. The gorgeous plucks of the guitar mesh into lush keys as Anjimile reassures, “I’m not a monster anymore.” Layered harmonies grow with each verse before making way for muffled percussion. The song explodes into horns and more percussion, airy background vocals and hopeful keys as it transforms from somber to optimistic. It’s a heartwarming exploration of gender, identity and change. —Jade Gomez

Los Angeles-based indie-folk artist Azniv Korkejian, who records as Bedouine, has shared “The Solitude,” the third and final single released from her forthcoming album Waysides out Oct. 22 via The Orchard. “The Solitude,” the opening track of Waysides, is inspired from a line of Joni Mitchell’s “My Old Man.” The Mitchell inspiration illuminates the track, as Korkejian sings of too many pillows and one-sided dinner tables, with resonating emotional intimacy residing in her vocals and dainty guitar playing backing it. There is a breeziness and warmth to “The Solitude,” sounding as if it could have time-traveled from 1971.—Ana Cubas

Electronic music duo Boy Harsher have always drawn from film as a source of inspiration for both their sound and visuals, with members Jae Matthews and Augustus Muller first meeting in film school. The daring darkwave musicians will now complete the next logical step by releasing a movie of their own, a move spurred on by the loneliness of the pandemic and Matthews’ multiple sclerosis diagnosis. Lead single “Tower” features Matthews at some of her eeriest, with her deep alto insisting “You don’t want to know about me” as the music lies in wait. The tense synth rumbles and distorted keys bubble into a terrifying peak of Matthews’ desperate shriek. It’s perfect for a cold night when you are aware of what lurks behind you. —Jade Gomez

Strange Ranger have always dabbled in older sounds, whether it be Midwestern emo or folky indie rock. On “It’s You,” however, they abandon all frames of reference for something captivating, disjointed and fresh. Synths and layered harmonies give way to trip hop with a punk flair that glitch into delicate fuzz. It’s a welcome new direction for a band that have always went their own route. —Jade Gomez