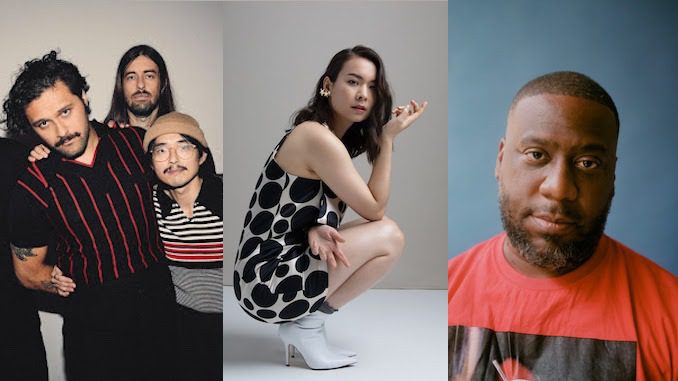 Did you miss us? After a slew of amazing lists from us to close out an exciting 2021, the Paste Music team is back once again with your regularly scheduled programming. Some of our favorite artists released just a fraction of the amazing songs out there this week, but we’re here to offer you our picks. Whether you want to bask in the nostalgia of Shamir’s ‘90s alt revival or groove to Mitski’s epic synthed-out melodies, we are always here to give you what you want. From the Paste team to you, we hope you have a happy and healthy new year. Here’s some songs to help kick that off.

The latest single from up-and-coming Connecticut-based punk quintet Anxious’ forthcoming debut album is a heartbreaking hard-rock adrenaline shot, with a Pat Flynn (of Anxious label-mates Fiddlehead) guest spot to top it off. Vocalist Grady Allen recalls the “deep emotional toll” his parents’ divorce took on him, grappling with the conflicting desires to be there for them and to protect his own psyche, which forced him to white-knuckle it through while caught in the middle (“I want to help, just say how / Long until I can finally breathe”). Meanwhile, Anxious let rip with guitars as insistently hooky and evocative as Allen’s vocals, lending an explosive power to his emotional catharsis. Flynn’s backing vocals lend further complexity to the track’s bridge, and Allen’s unresolved screams end it on a gut punch: “How long until you let me, let me … ” —Scott Russell

Ahead of her sixth studio album, Welsh singer/songwriter Cate Le Bon has shared “Remembering Me,” our final preview of Pompeii before its Feb. 4 release on Mexican Summer. In a statement, Le Bon describes “Remembering Me” as “a neurotic diary entry that questions notions of legacy and warped sentimentalism in the desperate need to self-mythologise.” Her vocals float over fluttering synths and a hypnotic mixture of electric and acoustic guitars as she evokes the human predisposition to delusion—the stories we tell ourselves to feel larger than life. “Louder than empty rooms / Face down in heirlooms,” Le Bon sings over longtime collaborator Stella Mozgawa’s drums, her self-image’s shadow lengthening with each word while the instrumentation around her distorts like a Dali painting. —Scott Russell

Gang of Youths: “in the wake of your leave”

The hype is real for Gang of Youths’ forthcoming album angel in realtime, and they outdo themselves on the soaring new single “in the wake of your leave.” Featuring backing harmonies from the Auckland Gospel Choir and percussion contributions from various drummers of the Cook Islands, the song is a loving tribute to the confusion that arises in the wake of death. “So as you canyoneered from our world upwards / And the angels took their place / I was the loser at your funeral / No emotion conveyed,” sings frontman David Le’aupepe. The song explodes into blissful harmonies and thrilling highs despite the somber subject matter, as if Le’aupepe is sending the song into heaven. —Jade Gomez

Virginia/Los Angeles singer/songwriter Lael Neale returned Tuesday with “Hotline,” her first release since 2021’s acclaimed Acquainted with Night. Co-written by Neale and her friend Jane McCarthy, and arranged and produced by Neale’s go-to collaborator Guy Blakeslee, the track finds the singer up to her usual tricks, making lo-fi, golden hour magic out of only her vocals, her trusty Omnichord and a well-placed electric guitar. Lyrically, “Hotline” inhabits the perspective of a broken-hearted lover, grasping at reassurance “for 99 cents a line,” whose desperate attempts at connection ring especially true in These Times. Neale’s folk-pop melange is shot through with intimacy and confidence alike, a potent combination. —Scott Russell

If you couldn’t tell, Paste is very excited for the forthcoming Mitski album Laurel Hell (Feb. 4, Dead Oceans), which we recently included in our Most Anticipated Albums of 2022 list. Her latest single “Love Me More” is a clear ode to the drama of ‘80s pop, featuring building synths and ominous pianos that urge toward a thrilling climax. Mitski yearns for a love as satisfying and fervent as hers as she sings, “I need you to love me more / Love me more, love me more / Love enough to fill me up.” —Jade Gomez

Modern-day jazz great Robert Glasper is known for pulling together an exciting list of collaborators, and “Black Superhero” is no different. His twinkling keys set a lush backdrop for a chillingly beautiful display of poetry from Atlanta rapper Killer Mike and Mississippi spitter Big K.R.I.T. “Every block, every hood, every city, every ghetto / Need a Black superhero,” sings BJ the Chicago Kid on the hook, and it’s a reminder that heroes can be found almost anywhere. —Jade Gomez

Toronto-based musician Scott Harwood has been releasing compelling art-pop under the moniker Scott Hardware since 2016, and is now gearing up to release his third full-length album, Ballad of a Tryhard. The project’s lush second single “Watersnake” finds him staring down the foe he compares to the titular animal, all while backed by a sea of breezy guitars and soaring strings, which propel his voice forward. “Take the snake from the water please,” he begs as angelic backing voices carry the sentiment over dense layers of instrumentation, making it sound more like a demand than a plea. What appears to be a beautiful haze of overlapping melodies quickly reveals itself as a warning with weight behind it. Between this track and lead single “Summer,” Hardware makes a compelling case for what he calls his aim to create a “reimagination of experimental adult contemporary.” Few things released under the banner of adult contemporary have sounded as intricate as this. —Elise Soutar

Multi-disciplinary artist Shamir is gearing up to release his forthcoming album Heterosexuality on Feb. 11 via AntiFragile Music. Produced by Strange Ranger member Hollow Comet, the album was recently featured on Paste’s Most Anticipated Albums of 2022 list. “Reproductive,” Shamir’s latest single, opens with slick R&B vocals and ‘90s-alt guitars as his voice touches thrilling highs. Shamir wades through the pressure of breaking generational curses, as he sings “I’ll make sure the evil ends here with me/ If it’s the only thing I do” over the hypnotically repetitive pitter-patter of drums. It’s an ode to the uglier side of healing and acceptance, and it’s wholly necessary. —Jade Gomez

Silverbacks: “A Job Worth Something”

Dublin rockers Silverbacks have shared the fourth and final single from their forthcoming Fad follow-up Archive Material (Jan. 21, Full Time Hobby), one of Paste’s most-anticipated albums of 2022. Silverbacks’ latest track finds vocalist and guitarist Daniel O’Kelly pondering a question with which fans of The Good Place (and philosopher T.M. Scanlon) will be familiar: “What do we owe to each other?” Over wheedling guitars and jangly, hip-swinging percussion, O’Kelly imagines looking back on a wasted life, regretful and ashamed. “Waking up with no purpose / Just to go to sleep / And the cogs won’t turn / To the devil on the beat / And the joke’s gone viral / Suckin’ on a straw / Threadin’ on a countdown / Everyone’s in awe,” he sings, belittling his ephemeral accomplishments, bereft of any lasting impact on the greater good. —Scott Russell

Alongside Philadelphia punks Soul Glo’s announcement of their forthcoming album Diaspora Problems, out March 25 via Epitaph, the band has also shared the album’s first single “Jump!! (Or Get Jumped!!!)((by the future)).” The song is an intense hardcore punk jam in the vein of Bad Brains and Black Flag, titans of the genre in the 80s and 90s. Frontman Pierce Jordan’s vicious spitfire lyrics clash in a chaotic fusion with groovy bass and breakneck drums as he launches a scathing critique of the disposability of Black art, with people finding value only after these creators die. “Like, I can get touched before I get to really speak / Would you be surprised if I died next week,” Jordan questions, as the band rages on in necessary fury. —Jade Gomez