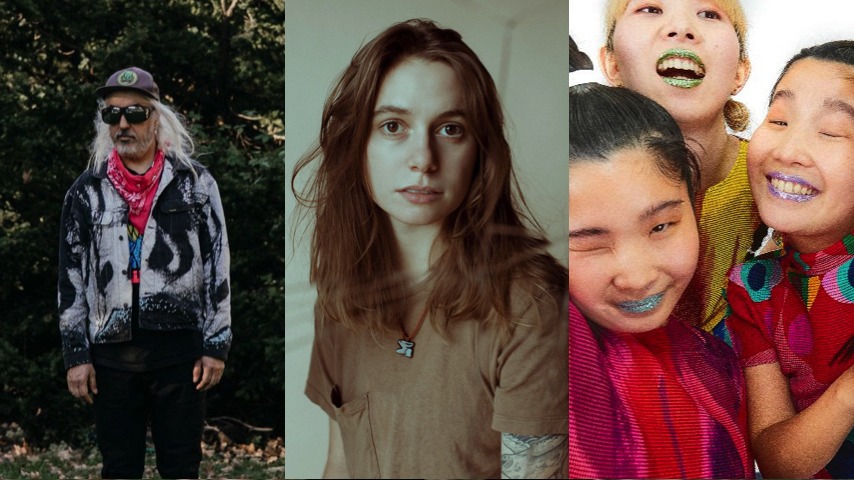 There’s so much music flying around the internet on any given day that it’s impossible to shake that nagging feeling that you’re missing something. You always are, of course, but even just scratching the surface of a week’s new releases can uncover so much special music. Our picks for the past seven days’ best tracks include the fruits of multiple album cycles, some just getting started (Massachusetts guitar-rock vets Dinosaur Jr.), others winding down (Julien Baker’s latest—and perhaps greatest!—album is out today). Read on for all 10 songs, and enjoy.

Bachelor: “Anything at All”

Indie-rock songwriters Melina Duterte and Ellen Kempner, best-known as Jay Som and Palehound, respectively, are teaming up to form Bachelor. The duo’s new project “is not a band, it is a friendship,” a press release stresses, but either way, fans of these artists have something to get excited about: Their debut single “Anything at All,” released Thursday via Polyvinyl Record Co., will be followed by “more Bachelor news coming soon in 2021,” that same presser promises. Recorded in California (Duterte is based in L.A.) during what was, at the time, a rare stretch off the road for the duo, “Anything at All” opens with a hefty bassline and subdued drums. Duterte and Kempner split vocal duties on “verses of queerness, lust and longing,” debating whether to speak to someone who’s a source of both attraction and anxiety: “She’s forever approachin’ / I’m forever in dread / Wrap me in silk and bite off my head.” The piano-accented singalong choruses give way to a spiky guitar interlude and, later, an overwhelming noise-rock breakdown, as if all that inner turmoil is exploding outward through Bachelor’s amplifiers. —Scott Russell

Nashville-based songwriter Becca Mancari is following the cosmic Americana of her 2017 debut album Good Woman and the candid art pop of last year’s The Greatest Part with Juniata, her forthcoming digital EP due out March 19 on Captured Tracks. Lead single “Annie” is a lavish, atmospheric orchestral-pop song that draws inspiration from the sounds of ‘50s and ‘60s film, with Mancari attempting to evoke “that time of feeling like you were swept up into a dance.” She originally wrote the song with her band Bermuda Triangle, which features Brittany Howard (of Alabama Shakes fame) and Jesse Lafser, and it’s not difficult to imagine its past life as a rambunctious rock track. But Mancari’s new take on “Annie” moves in the opposite direction, resulting in a cinematic ballad that lets its feelings of longing emanate to enchanting effect. —Scott Russell

Japanese four-piece CHAI released their single “Maybe Chocolate Chips” (feat. Ric Wilson) on Wednesday with an accompanying video. The latest track follows singles “ACTION” and “Donuts Mind If I Do,” and comes ahead of their third album WINK, out May 21 on Sub Pop. “Maybe Chocolate Chips” brings a lo-fi feel to CHAI’s brand of indie rock, with a bass-heavy beat and whirring synth. Rapper Ric Wilson, whose EP with Terrace Martin was one of Paste’s 2020 favorites, joins the song halfway through with an eloquent, feel-good verse. The music video, directed by Callum Scott Dyson, is stylized as a collage of CHAI and Wilson with other whimsical paper cutouts, and perfectly encapsulates the pure fun of CHAI. —Carli Scolforo

Dinosaur Jr. announced Tuesday that their 12th album, Sweep It Into Space, arrives April 23 via Jagjaguwar. The album is the fifth released since the reformation of the band’s original lineup that made waves in the ‘80s and ‘90s, and follows 2016’s Give a Glimpse of What Yer Not. To accompany the announcement, the Amherst band shared their new single “I Ran Away,” a masterful mix of rhythmic acoustic guitar and electric guitar riffs. The song features 12-string guitar from Sweep It Into Space co-producer Kurt Vile, who is the only musician outside of the band’s lineup to appear on the album. —Carli Scolforo

Flock of Dimes: “Price of Blue”

Flock of Dimes, the solo project of Jenn Wasner, shared her latest single “Price of Blue” on Thursday. The song is the second single released ahead of her sophomore album Head of Roses, out April 2 via Sub Pop. The music video for “Price of Blue,” a six-minute masterpiece of psychedelic guitar riffs and haunting vocals, was co-directed by Wasner and Graham Tolbert. The black-and-white video is a taste of many collaborations to come on Head of Roses, which is slated to include a host of other artists, including Bon Iver’s Matt McCaughan and Wasner’s Wye Oak bandmate Andy Stack. Wasner spoke of her inspiration for “Price of Blue” in a statement: “This song is about trying, and failing, to connect. It’s about the ways in which, despite our best efforts, we misunderstand each other, and become so attached to stories that we’re unable to see the truth that’s right in front of us. And it’s about the invisible mark that another person can leave on your body, heart and mind long after their absence.” —Carli Scolforo

One of Paste’s most-anticipated albums of 2021 is out now, and Nashville singer/songwriter Julien Baker was so kind as to share one last track from Little Oblivions ahead of her new record’s release. She shared the instrumentally upbeat, yet lyrically harrowing “Heatwave” on Wednesday along with a lyric video (created by Sabrina Nichols), following previous Little Oblivions singles “Favor” (which featured Baker’s boygenius bandmates Phoebe Bridgers and Lucy Dacus), “Hardline” and “Faith Healer.” Baker’s latest song is replete with “gruesome beauty,” as she sings, opening on the fiery image of an exploded engine, and unspooling from there into thoughts of death and the cosmos, all culminating in an unforgettable lyric (CW: suicide): “I’ll wrap Orion’s Belt around my neck / and kick the chair out.” Baker surrounds all this with some of the more casually dynamic instrumentation of her career, a diffuse set of textures featuring electric and acoustic guitars, banjo, piano and even a theremin, which taps into the chorus-less song’s sense of irrevocable spiritual unrest. —Scott Russell

Los Angeles-based indie-pop duo Junaco, i.e., singer/guitarist Shahana Jaffer and drummer Joey LaRosa, shared their first new material of 2021 on Wednesday, the peaceful, yet deceptively propulsive “Blue Room.” Produced by Sufjan Stevens, Taylor Swift and The National collaborator James McAlister, the song is the second single from Junaco’s untitled EP coming later this year, as well as an apt introduction to Jaffer and LaRosa’s overall aim: The duo define their band name as “rolling with the pace of life and enjoying the present; living and working with intention,” a sentiment reflected in the laidback lope of “Blue Room,” which centers Jaffer’s gauzy psych guitar work and reflective, breathy vocals. It’s as if the song drapes a physical calm over your body, a weighted blanket made of contemplative, tightly focused melody. —Scott Russell

The statement-making first single from Chicago rap duo Mother Nature’s new mixtape due out this spring, “MOMENTZ” is a glossy, confident track built on a synth-studded, bass-heavy beat from Windy City producer BoatHouse. Performing under their hometown El train in the accompanying music video, Klevah and TRUTH trade thoughtful bars, looking back on how far they’ve already made it and making no bones about their ambitions for the future. Even their ad-libs are uncompromising, as Mother Nature declare from the get-go, “We buildin’ empires,” emphasizing on the hook, “We ain’t goin’ nowhere / This is infinite.” —Scott Russell

Spirit of the Beehive: “THE SERVER IS IMMERSED”

Spirit of the Beehive released a new single, “THE SERVER IS IMMERSED,” and an accompanying music video on WEdnesday ahead of their forthcoming album ENTERTAINMENT, DEATH, out April 9 via Saddle Creek. The song follows their first single off the LP, “THERE’S NOTHING YOU CAN’T DO.” The music video for “THE SERVER IS IMMERSED” was edited together by founding band member Zachary Schwartz. The hypnotic track is as captivating as its video, which is equal parts fascinating and unsettling. Audio and visuals are pulled from videos that are not easily identifiable, but appear to include news stories and infomercials from the ‘60s to the ‘80s. These clips are warped with effects and mashed together with other psychedelic visuals, including truly creepy shots of a figure in a rubber mask. The result, combined with Spirit of the Beehive in great form with their enigmatic lyrics and dreamy distortion, make for an experience that grabs the full attention of your eyes and ears. —Carli Scolforo

“Tokens” is the opening track and lead single from Hudson Valley folk musician Will Stratton’s forthcoming seventh album The Changing Wilderness, and it has three things foremost on its mind: time, love, and Paul Thomas Anderson’s Inherent Vice. “The way time shimmers and shifts in that movie is fascinating to me, verging on hypnotic, and I was trying to evoke a little of that feeling in this song,” says Stratton. “Verging on hypnotic” is an apt descriptor for the song itself, a gorgeous layering of acoustic fingerpicking, gentle electric noodling (courtesy of Ben Seretan), judicious piano accents, and Stratton’s murmured memories of transformation, romantic and otherwise—all “the ways we change over time” swimming around in his mind. “Tokens” is the sort of song that feels like a cross-section of human life, not quite fact and not quite fiction, rendered with care and sewed into a lovely folk-pop tapestry. —Scott Russell