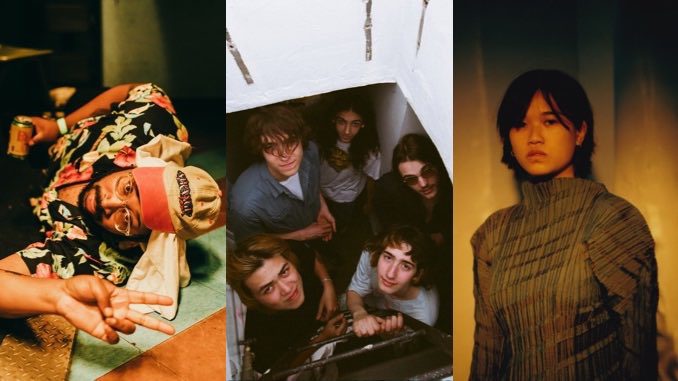 This list took last week off, but we’re back, baby. Paste Music’s collective brain cells have mostly been getting blasted away by festival sets lately, but we scraped together what few we have left to select the past week’s top 10 new tracks, featuring a new song from 2020 breakout Bartees Strange, the latest singles from much-anticipated new releases by Geese and Hana Vu, and more. (Seven more.) What are you waiting around for?

Activity’s eerie post-punk is refreshing, and their newest single “Text the Dead” arrives just in time for Halloween. Expansive airy melodies and dissonant reverberations underscore the footstep-like drums to create an unshakable sense of dread, improbably laced with hope. Written after vocalist Travis Johnson’s mother passed of pancreatic cancer, the song tells of the universal feeling of wanting to communicate with the other side in the throes of grief. It’s as heartbreaking as it is optimistic, giving truth to the instinctual need for normalcy in the wake of tragedy. —Jade Gomez

One of Paste’s top artists of 2020 is having a pretty good 2021, too: On the heels of a statement-making set at this year’s Pitchfork Music Festival, D.C.-based rock songwriter (and in-demand producer) Bartees Strange shared a new track, “Weights,” which will appear on the forthcoming deluxe version of his breakout debut album. Strange wrote and recorded “Weights” earlier this year with Grammy-nominated producer Will Yip, but the track would have fit in well on Live Forever. Both Strange’s vocals and the instrumental’s propulsive art-rock evoke Bloc Party, but his lyrics are more moody and pensive, looking back on a romantic connection that fell apart. “Timing’s not a friend sometimes,” he sings, his hurt and regret accentuated by synth backing fit for a Robert Smith vocal. A fleeting acoustic breakdown comes and goes in what feels like an instant, with Strange going full Kele Okereke in the track’s heart-squeezing climax. —Scott Russell

This is the second single from Couplet—former You Blew It! singer and songwriter Tanner Jones, and Adam Beck and Evan Weiss of Into It. Over It.—ahead of their debut album LP1’s Oct. 1 release. “Sold Our Shirts” has its tongue buried deep in its cheek, with Jones exposing the absurdity of the musician’s life over a warm, ankle-deep sea of synth, dramatic drums and an intimate acoustic guitar. “We hit our stride, numbers higher than the other guys, and we tagged the right accounts / We sold our shirts, the venue paid us what we’re worth, and we slept the right amount,” Jones insists, the song’s insistent refrain putting several exclamation points on his winking self-congratulation: “We’re here, forever revered / and praised.” If the internet is forever, then this list proves him exactly right. —Scott Russell

Efterklang: “Hold Me Close When You Can”

The third single from Efterklang’s forthcoming sixth studio album (and City Slang debut) Windflowers, coming Oct. 8, “Hold Me Close When You Can” is a placid, yet powerful ode to resilience. The veteran Danish post-rock trio—Casper Clausen, Mads Brauer and Rasmus Stolberg—interweave stately piano, synth static and strings, a composition that is utterly unhurried, yet carries the unmistakable kinetic energy of a pulled-back slingshot, imbuing Casper Clausen’s gossamer vocals with immense urgency and poignance. “Hold yourself to yourself / Hold me close when you can,” he urges repeatedly, a moving reminder that even when we think “when we can’t go on,” we can choose to love ourselves and lean on each other. —Scott Russell

Rising Brooklyn rockers Geese shared the third single and title track from their forthcoming debut album, Projector, coming Oct. 29 via Partisan/Play It Again Sam. Where the band’s previous Projector previews have been invigorating with their ever-shifting dance-rock and post-punk terrains, “Projector” is a different, more restrained animal. The track maintains a mid-tempo chug as frontman Cameron Winter cryptically considers the personal and universal (“Decency of mankind has been all but slaughtered by the computer and the wire / Now I’m the only good man left on earth, so why don’t you want me?”) over spindly staccato guitars. The instrumental builds to a psych-rock drone in places, but always stops short of erupting outright, instead falling back behind the uncanny visions depicted in Winter’s vocals. —Scott Russell

Los Angeles-based artist Hana Vu is back with another single from her forthcoming album, Public Storage, out Nov. 5 via Ghostly International. “Keeper,” following “Maker” and “Everybody’s Birthday,,” is a glimmering, new wave-inspired track, synths whirling around her voice as it teeters between unbothered and tender. Public Storage is the first time Vu welcomes a co-producer, Jackson Phillips (Day Wave). On “Keeper,” vocals and sounds are elaborately tangled, slightly fuzzed without dimming the soul of the song. —Ana Cubas

The new track from Topanga Canyon native Lou Roy, her first release for U.K. indie label Balloon Machine (heka, Laura Fell), begins with a panic attack and ends with self-assurance—it gets knocked down, but it gets back up. Roy renders that trajectory as effortlessly engaging indie-pop, draping her stream-of-consciousness vocals over a beat that began its life as her tapping on a water bottle. Co-producer Sarah Tudzin (illuminati hotties) helps Roy pay tribute to the titular warriors—“female figures in Norse mythology who ride horses through the sky with big, long swords and are very sick,” as Roy describes them—by grafting their heroism onto her own internal struggles. “Hey man, what you doin’? / Come on back, I need you movin’,” she self-serenades over the track’s clattering percussion and artfully scattershot synths and horns, pushing herself and her listeners to stand up and fight their battles like the warriors they are. —Scott Russell

Mandy, Indiana, the Manchester, U.K. trio formerly known as Gary, Indiana, will release their debut record—the utterly ungoogleable … EP—on Nov. 19 via Fire Talk Records. Lead single “Bottle Episode” has all the acute intensity of its namesake, a tight squeeze that breaks the expected formula by design. Valentine Caulfield (vocals/lyrics), Scott Fair (guitar/production) and Liam Stewart (percussion) begin the track with a war march, only to replace it with thumping bass that sounds like it’s bleeding through the walls of a packed club. The militant and the escapist elements of the track soon collide as Caulfield’s lyrics, delivered in her native French, depict “men waiting, moving forward; war is never mentioned, yet it is obvious that the men are waiting for death. The song ends with the men almost dancing as the bullets hit them,” she explains. That haunting, uncanny combination—the shared oblivion of death and dance—is where “Bottle Episode” makes its home, an exhilarating darkness for the bold to brave. —Scott Russell

Cult indie-rockers Ovlov are back again, announcing their third album Buds (Nov. 19, Exploding In Sound) and sharing its lead single, “Land of Steve-O.” With more breakups than albums since their formation in 2009, the Steve Harlett-led Connecticut quartet have loomed far larger than their output, thanks to singularly sustained word-of-mouth and influence. “Land of Steve-O” stays true to the band’s beloved fuzz-rock and noise-pop sounds while teasing the shift towards their most pop-centric material yet that a press release promises. Quick-hit drums and thrumming guitar and bass give the song an effortless locomotion while Harlett sings warmly about wandering Connecticut and reaching out to a friend. Harlett and Stove drummer Jordyn Blakely join voices on the choruses, offering affectionate reassurance over oscillating electric guitar squeal (which later erupts into solo with shades of J Mascis): “Oh my new guy, don’t feel crazy when you walk around your town / Just call your friend Steve-O.” We all need a Steve-O to lean on, don’t we? —Scott Russell

New York rapper Wiki has been busy steadily releasing albums that evoke the city in the ‘90s, with its blissed-out, laid-back hip-hop blaring through car speakers and from porch steps. On the latest single “Can’t Do This Alone,” off his much-anticipated album Half-God, produced by Navy Blue, Blue kicks off the track with a guest verse that’s swiftly picked up by Wiki’s slick-talking raps, bursting at the seams with an endless stream of consonants. The hypnotic loop follows the trail of the two telling the tales of their births (Wiki’s mother wanted an epidural, but it was painless in the end) and even features Blue calling it back to the seldom-referenced Avatar: The Last Airbender with “Big brodie like how Appa is to Momo.” In many ways, the song is like an epidural itself, injecting some relaxation that we could all use. —Jade Gomez