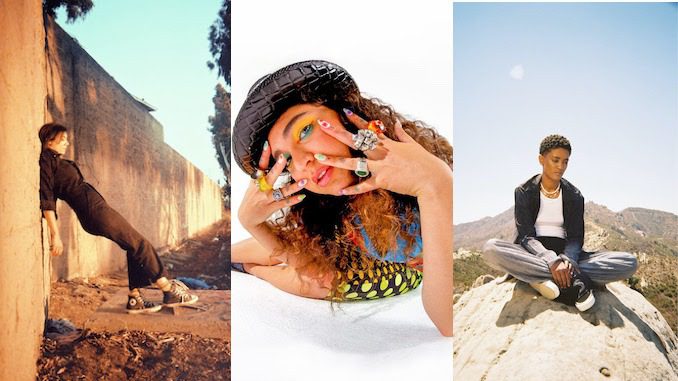 29,000 websites down in the DNS outage, 29,000 websites down. Take one down, pass it around, 28,999 websites down in the DNS outage. Fortunately (or unfortunately, which in that case, why are you here?) Paste is still here to bring you some good banter and even better tunes. Cheekface’s “Next To Me (Yo Guy Version)” is perfect if you’re the type to look in your crush’s trash (we’ve all been there), and Syd’s “Fast Car” is perfect for going on a long car ride to nowhere with your love in tow. New illuminati hotties is great for your next pool party, and Remi Wolf can soundtrack the sleepover after the pool party. Point is, just because FedEx’s site is down doesn’t mean you have to be. Wipe the sweat off your brow and enjoy some of Paste’s picks for the best new tracks.

Cheekface: “Next To Me (Yo Guy Version)”

Los Angeles rockers Cheekface are keeping the Cheek Freaks fed, sharing another new single Tuesday, “Next to Me (Yo Guy Version).” The band has a U.S. tour set for the fall in support of their acclaimed sophomore album Emphatically No., and this is the second single they’ve released since their record’s release in January, after April’s “We Need a Bigger Dumpster.” As is typical of Cheekface tunes, “Next to Me (Yo Guy Version)” has a broken heart and tongue in cheek both—Katz evokes that bittersweetness right off the bat, starting the first verse, “My heart has hiccups, there’s no relief.” Upbeat guitar riffage, cowbell and a repeated Pavement reference buoy Katz’s rueful remembrances of his departed friend (“I liked it better when you were standing next to me”), with a rad guitar solo to top it all off. That’s Cheekface for you—they just have this way of putting a smile on your face. —Scott Russell

The third single ahead of her new album Let Me Do One More, illuminati hotties—the raucous and energetic project of songwriter Sarah Tudzin—sounds mellow and lovestruck on “u v v p (ft. Buck Meek). Built around a Beach Boys-evoking chord progression, the track maintains its sunny composure despite the songwriter’s talent for massive, noisy production. Big Thief’s Buck Meek features on a David Berman-esque spoken word segment that increases the feeling of sentimentality that defines and lends immense heart to “u v v p.” Tudzi singing “I don’t want to hide you / I don’t want to hide too” feels particularly sorrowful alongside the instrumental, which continues the songwriter’s streak of excellent and powerful singles. —Jason Friedman

Following the excellent single “Kill Me” ahead of her forthcoming album on Saddle Creek Any Shape You Take, Indigo De Souza holds onto the momentum that led Paste to call that track one of our favorites of June with new single “Hold U.” Starting with only a drum machine and an organ, the energetic and funky track builds to a cathartic conclusion with De Souza’s voice acting as a sonic and emotional guide. Each element, down to the the sensitive and headstrong lyrics feel vivacious and brimming with character, which only makes us more excited to hear what new feelings Any Shape You Take will find the songwriting exploring and revealing within the listener. —Jason Friedman

Experimental stalwarts Low announced their follow-up to 2018’s spellbinding Double Negative last month, Hey What, out Sept. 10 on Sub Pop. Tuesday, they shared the second single following “Days Like These,” the dynamic and expansive “Disappearing.” Keeping in line with the band’s extreme talent for crafting visceral, ambient soundscapes, “Disappearing” features clean vocal harmonies that hover atop an instrumental that feels like its constantly collapsing under its own weight, making the track feel almost like a sort of apocalyptic hymnal. —Jason Friedman

Indie-rock group Penelope Isles have been pretty quiet since the release of their lush and electric debut album Until The Tide Creeps In in 2019, but on new single “Sailing Still,” they prove that time has been spent maturing and evolving as songwriters. Complex string arrangements and heavy guitars drop like an anvil, feeling like a noise-pop avalanche has made contact. It’s hard to successfully pull off a song that makes such dynamic use of space—especially within the format Penelope Isles is used to—but they pull it off with the effortless brilliance of bands like Grizzly Bear or Beach House. —Jason Friedman

Hot off her forthcoming debut full-length album (which is good), Remi Wolf offers another fixture in her vibrant funhouse with “Liquor Store.” The song, which is Wolf’s reflection on her sobriety, captures the stress and subsequent euphoria of newfound sobriety with a sprinkle of her psychedelic funk mixed with R&B. With 2020 behind us and 2021 acting as an optimistic year full of change and excitement, “Liquor Store” is a reminder that it’s okay to bare it all. —Jade Gomez

The void that Syd left in R&B during her four-year absence after the release of her solo debut Fin was a silent one. Known primarily as the vocalist of The Internet, Syd’s exploration of queerness in its most delicate form is present throughout all of her art. “Fast Car,” a song which bears no relation to the Tracy Chapman classic, is Syd’s latest offering. Dynamic ‘80s drums and hushed synths turn Syd’s fantasy into a retro-tinged movie sequence about Black queer love. —Jade Gomez

For longtime Chemical Brothers fans, “Work Energy Principle” is a live set staple yearning to see the light of day as an official release. For the uninitiated, it’s a banger opening up a new world of music. It’s what The Chemical Brothers does best: creating both utopian and post-apocalyptic landscapes of sound. Clocking in at nine minutes, it’s a song that commands your attention as it’s clear highs and lows take you on a journey of epic—and psychedelic—proportions. —Jade Gomez

The War on Drugs: “Living Proof”

The War on Drugs are back with another one of Paste’s most-anticipated 2021 albums, announcing that their fifth studio LP I Don’t Live Here Anymore will be released Oct. 29 on Atlantic Records. The announcement is accompanied by the video for lead single and opening track “Living Proof,” as well as a 2022 tour of North America and Europe in support of the band’s new record. “Living Proof” leads with acoustic guitar and gleaming keys, with Adam Granduciel delivering his stream-of-consciousness lyrics with a poignance befitting some of his most personal songwriting to date—“I’m always changing,” he repeats, the song’s only constant as he moves from memory to expectation and back again. The song is a slow burn that doesn’t muster The War on Drugs’ typical guitar-driven energy until late in the game: “But I’m rising / And I’m damaged / Oh, rising,” he sings at its peak, evoking what a press release says is the album’s central concept: “resilience in the face of despair.” —Scott Russell