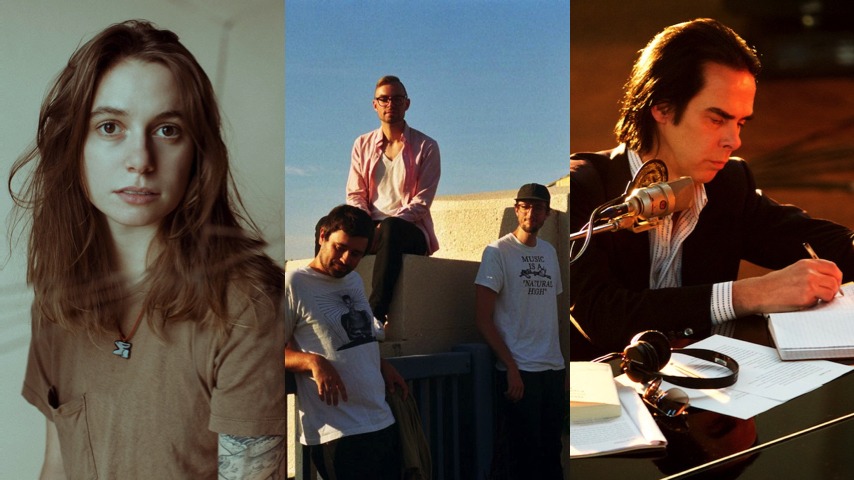 February 2021’s final New Music Friday has arrived, and with it another heaping helping of music worth wrapping your ears around. A handful of Paste’s most-anticipated releases of the month are here, including a potential career-best effort from the great Julien Baker, an out-of-nowhere new Nick Cave & Warren Ellis record, and more. Stream away while keeping in mind that, particularly during these pandemic times, the more you can support your favorite artists by buying their music, the better.

Benjamin John Power’s latest album as Blanck Mass, the follow-up to 2019’s Animated Violence Mild, runs 42 minutes and consists only of two tracks, simply titled “Phase I” and “Phase II.” Within those two tracks are entire worlds: Power incorporates not only “an archive of field recordings from a decade of global travels,” per the album bio, but also a dizzying array of electronic sounds, from downright celestial ambient bliss to gothic and unnerving synth work. In many ways, In Ferneaux is an all-encompassing quarantine album, as it finds Power considering the flipside of Sarte’s notion that “Hell is other people”: In isolation, we burn all by ourselves, but in that suffering, there is also growth. The music reflects this ever-shifting swirl of struggle and satisfaction, “misery and blessing,” juggling sounds both rapturous and discordant, as well as the speech and ambient noise of everyday life, to create a challenging and special record that’s very much of the moment. —Scott Russell

Oakland duo Brijean are set to follow up their 2019 EP Walkie Talkie with a new LP, Feelings, a vibrant cauldron of funky lounge pop, bossa nova, psych, jazz and IDM. Their Latin-inspired rhythms coexist with retro keyboards and dream pop vocals, and the whole thing sounds strangely boisterous and peaceful at the same time. Although you may find yourself torn between the urge to fall into a psychedelic trance and shuffle along to the beat, it’s a striking reminder of how exciting it can be to hear such a rich blend of cultures. It’s a detailed album that goes beyond mood setting—above all else, these songs are rooted in raw expression and possibility. —Lizzie Manno

With a stamp of approval from collaborators Phoebe Bridgers and Marshall Vore, Charlie Hickey’s debut EP isn’t one to miss. Count the Stairs is a bittersweet collection of indie folk peppered with growing pains and love songs. Songs like “Ten Feet Tall” (featuring Bridgers) and “Two Haunted Houses” highlight Hickey’s talent as a singer/songwriter, as he memorably encapsulates the ups and downs of coming of age. With gentle piano tracks, acoustic folk laments and lighthearted indie rock, Hickey manages to showcase a broad range of what he’s capable of across a six-song EP. —Carli Scolforo

Cloud Nothings: The Shadow I Remember

“Am I older now or am I just another age?” Dylan Baldi asks on track one of Cloud Nothings’ new album The Shadow I Remember. The band recently celebrated the 10th anniversary of their debut album Turning On, which was just reissued via Carpark Records, so it makes sense that they’re pondering the passage of time. On their latest LP, Baldi visits his old self with hindsight (“Well, it’s hard for me to say / if I would do it all again / for what purpose?”), while also looking to the future and opening a whole different set of accompanying pitfalls, namely existentialism (“Am I something? Do you see me? / Does anybody living out there really need me?”). For this heady task, Cloud Nothings reunited with Steve Albini (who produced their 2012 breakout Attack on Memory), and tried to fold in the rawness of their early works with their current emotional headspace. The result is an explosive, snappy tracklist that evokes the counteracting urgency when a fear of stasis begins to set in. —Lizzie Manno

In the past, singer/songwriter Julien Baker—acclaimed both as a solo act and as a member of boygenius alongside Lucy Dacus and Phoebe Bridgers—has stunned us with her ability to evoke powerful feelings using only her hushed vocals, confessional lyrics and sparse instrumentation. On her third studio album Little Oblivions, though, Baker’s self-described “bummer jams” have gained a new and arresting sense of scale, losing none of their poignance in the process. These are lush, expansive compositions, awash in everything from drum machines and synthesizers (“Highlight Reel”) to banjo and what sounds like theremin (“Heatwave”). But ever-present on Little Oblivions is the breathtaking introspection of Baker, alone at a piano (“Song in E”), pouring her whole heart into her songs. They’re more fearless than ever, with instrumental scope to match that of their overwhelming emotions. —Scott Russell

Hyper-prolific Aussie freak-psych rockers King Gizzard & The Lizard Wizard have released their seventeenth record L.W., the follow-up to 2020’s K.G. (we’ll let you put those acronyms together yourself), and the third entry in their series of microtonal tuning experiments begun by 2017’s Flying Microtonal Banana. Call it the King Gizzard paradox: You always have some idea of what you’re getting into with a new record by this band, but at the same time, you have none at all. L.W. boasts their signature sense of sonic adventure, a work of freewheeling imagination and explosive musicianship that incorporates Far Eastern sounds a la the baglama, a Turkish stringed instrument, but never sounds quite of this earth. —Scott Russell

Musical prowess runs through Lydia Luce’s blood. The Nashville-based singer/songwriter had a violin thrust in her hand by her mother (a professional conductor for the Ars Flores Symphony Orchestra) as soon as she was big enough to hold it. It’s lucky for us that she did—Luce’s brand of spellbinding folk is made all the better by her virtuosity as a classical musician. Her skilled incorporation of strings is the bread and butter of Dark River, a stunningly profound and personal album inspired by a harrowing breakup and subsequent trip into the mountains that allowed Luce to “sit quietly in sadness and let myself feel the deep loneliness I was trying to avoid,” per her album bio. The album opens with “Occasionally,” a gorgeous track that flaunts Luce’s skill as a singer. Her voice shines through as evocative and emotional, effortlessly dipping down for the lower notes against the backdrop of stunning chamber pop. It’s undoubtedly one of the best tracks on an album that’s solid through and through. —Carli Scolforo

Longtime collaborators Nick Cave and Warren Ellis have shared a surprise new album, their first proper LP as a duo (though Ellis has long been a member of Cave’s band, The Bad Seeds). Recorded over the course of weeks in lockdown, Carnage is haunting and atmospheric first and foremost, setting Cave’s expressive baritone vocals against Ellis’ darkly sweeping compositions to evoke mental unrest and emotional devastation. Cave describes Carnage in a statement as “a brutal but very beautiful record embedded in a communal catastrophe,” referring all but certainly to the coronavirus pandemic that has killed 2.5 million people worldwide. “This song is like a raincloud that keeps circling overhead / There it comes, around again,” sings Cave on the title track, as if he’s being haunted. “Making Carnage was an accelerated process of intense creativity,” says Ellis. “The eight songs were there in one form or another within the first two and a half days.” That spontaneity comes across in the music, the songs shifting unpredictably, as if unglued from time or any sort of linear progression, as we all are at present. —Scott Russell

Glasgow indie band Nightshift (featuring members of Spinning Coin, 2 Ply and Robert Sotelo) are shrewd in their sonic choices. On their new LP, Zöe, avant-garde and no wave tendencies mingle with classic indie-pop influences, resulting in an alluring push and pull. For an album that thrives on their rhythmic interplay and colorful chemistry, it’s surprising that these songs were recorded remotely during lockdown, but they’re still able to lock into grooves with ease. The extended breakdown on the blissful “Power Cut,” for example, finds them riffing over each other like it’s a rapturous jam session—synths, bells, and guitars flutter and glow, until a screeching flute solo invades and takes the track into wonderfully freakish territory. Other tracks like “Make Kin” and “Infinity Winner” thrive on their spacious, hair-raising qualities, with a palpable gloom brought on by jazzy post-punk. Whether it’s an offbeat drum passage or charming shared pop vocals, Nightshift have plenty of curveballs and plenty of heart. —Lizzie Manno

Completed Songs is the debut album from Sloping, the new project of Atlanta singer/songwriter JJ Posway, and a stark divergence from his work with Athens jangle-rock outfit Scooterbabe. A collection of arresting, intimate bedroom-pop songs with veins of both electronica and Americana running through them, Completed Songs pays homage to Elliott Smith with its foregrounding of hushed acoustic sounds and lyric, introspective songwriting. Posway’s eye for detail brings an evocative specificity to his music, from the “red clay” of his home state in the banjo-accented synth-pop tune “Fitting Room” to the “cloud-eyed stray cat let inside” (rendered by Posway via vocoder) on the sparse “Treading,” which gradually blooms into an Anna Staddon duet with dream-pop ambitions. It’s a consistently surprising and dynamic record, and a promising first statement from Posway as a solo artist. —Scott Russell