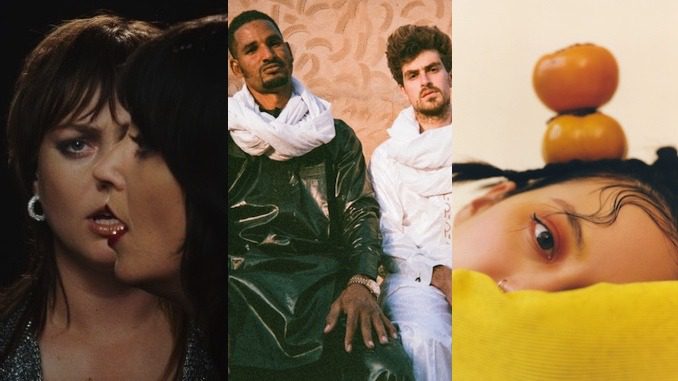 Contrary to last week’s shenanigans, the Paste music staff managed to wrangle up another double-stuffed May week to bring another fine selection of some of our favorite tracks of the week, all while in the midst of welcoming our newest group of summer interns. This week’s eclectic offerings range from Duran Duran reminding us of their longstanding success with “INVISIBLE” to Pond’s funky bop “America’s Cup,” which pays loving homage to Prince and P-Funk in their special Australian way. Sit back and listen to our favorite releases of the week from one of the most eclectic release months of the year so far.

Surprised to see Duran Duran here? Quite frankly, so are we, but “INVISIBLE”—the lead single from FUTURE PAST, the band’s first album since 2015—is undeniable. The electro-pop crusher features co-production from Erol Alkan and guitars by Blur’s Graham Coxon; other contributors to FUTURE PAST include Lykke Li, Mike Garson, Mark Ronson and the legendary Giorgio Moroder, of which Simon Le Bon boasts, “I’m not saying it’s epic, but well … yes I am.” John and Roger Taylor handle the track’s iron-fisted low end, while Nick Rhodes peppers in soaring synths and Le Bon wields weapons-grade hooks, imagining “a life without a voice,” imprisoned by romantic disconnection. Though lyrically, the track bites off a bit more than it can chew (“A voiceless crowd isn’t backing down,” Le Bon insists, a rather clumsy stab at the zeitgeist), “INVISIBLE” draws its power from that glorious, arena-packing groove, which Duran Duran can still conjure after all these years. —Scott Russell

Experimenting with facets of drone music, polyrhythms and various textural elements, English duo Febueder uncover an eternal optimism on “May Sun.” Sustained strings and dry percussion entangle a playful psych-pop melody while an emotional urgency surfaces behind vocalist Kieran Godfrey’s repetitive vocals. “May Sun” sounds very much in fact like the subject of its title—a warmth that emerges after cold, unpleasant times. —Jason Friedman

Michelle Zauner has shared the third and final single from the forthcoming Japanese Breakfast record Jubilee, out June 4 on Dead Oceans. “Savage Good Boy” itself is Zauner at her most clever and controlled, writing into the contradiction in the track’s title: “I want to make the money until there’s no more to be made / And we will be so wealthy I’m absolved from questioning,” she sings over bubbly drums, guitar and keys, later adding, “And as the last ones standing, we’ll be tasked to repopulate / And as you rear our children, know it’s the necessary strain / They’re the stakes in the race to live.” It’s a testament to Zauner’s songwriting that she can make stepping into such a ruthlessly rapacious mind so much fun. —Scott Russell

Acclaimed singer/songwriter Lucy Dacus has shared another new single from her forthcoming album Home Video, which finds Dacus revisiting her roots so as to better understand who she’s become. On “VBS,” she’s focused on her vacation bible school days, singing, “In the summer of ‘07 I was sure I’d go to heaven / but I was hedging my bets at VBS.” Dacus’ recollections balance a genuine search for spiritual fulfillment and social affirmation with gentle humor and sage wisdom; addressing an old boyfriend directly, Dacus admits, “Your poetry was so bad, it took a lot to not laugh / You said that I showed you the light, but all it did, in the end / was make the dark feel darker than before.” Her moving vocals are supported by Jacob Blizard’s plentiful electric and acoustic guitars, as well as Jake Finch’s judicious drums and organ. —Scott Russell

“Weird Dreams” is a soothing and surreal pop track, in which Bay Area singer/songwriter Mae Powell does her best to make sense of her brain’s nocturnal ramblings. Over garbled acoustic guitar, gentle bossa nova percussion, lush strings and bleary lap steel accents, Powell recalls a literal flight of fancy (“On a plane from New York City / The plane crashes four or five or six times / The pilot says it’s ‘cus a stoner got a hold of the controller,” she croons) and connects her subconscious mind’s messaging to The Discourse, each as much an impediment to understanding as a means of achieving it: “Why are there two sides to everything / but no one’s in the middle? / Why am I stuck between overbearing / And way, way, way, way, way too subtle?” —Scott Russell

Tuareg songwriter and guitarist Mdou Moctar and his band have shared new single “Taliat” from their forthcoming album Afrique Victime, due out May 21 on Matador Records. A kaleidoscopic array of guitars mixed with the groovy bass and expressive vocals the project has been known for, the track finds Moctar pleading in his native Tamasheq to “never experience unrequited love and the pain of a broken heart.” The tender spirit driving the catchiness of “Taliat,” mixed with the vibrant virtuosity of its creator, lends the track an immediate and potent buoyancy. —Jason Friedman

Native Sun: “Off the Dial”

Brooklyn four-piece Native Sun go full Stooges on their buzzsaw of a second 2021 single, which follows “Jesus” (but not that way). The band say in part of the song, “Don’t let others write your future,” and “Off the Dial” itself writes that defiance large over an old-school punk explosion, with cymbal crash and power-chord thrash that would sound right at home blaring out of CBGB and spilling onto the city streets. “Exiled / Left off the dial / Burn down the aisles / Of the dreams you never wanted,” Danny Gomez howls, exhorting the overlooked to say “fuck ‘em” and make their own ways. Native Sun break the track down into a whirling maelstrom of feedback and tom hits, the anarchic energy of which burns even hotter on the live version that band also shared this week. —Scott Russell

Australian psych-rockers Pond have announced their forthcoming studio album 9, out Oct. 1 via Spinning Top Records / Secretly Distribution, accompanied by their newest single. “America’s Cup,” is a psychedelia-tinged funk groove evocative of grainy ‘70s and ‘80s club footage with the warmth of nostalgia washed over it. The thumping bass and harmonies dancing behind frontman Nick Allbrook’s sing-talk make for an infectious summer earworm. —Jade Gomez

On his new IV EP, Sam Gellaitry, known primarily for producing room-shaking quasi-trap beats a la fellow Scottish producer Hudson Mohawke, steps in front of the mic and crafts some of the most unique and exciting bedroom-pop tracks of the year so far. “Games,” a standout from the EP, finds the producer using his voice as an integral sonic element. Marrying his crooning falsetto with a swirling prog-rock guitar arpeggio, Gellaitry unveils a singular sonic canvas, one that builds up to a raucous and exhilarating conclusion. —Jason Friedman

Sharon Van Etten & Angel Olsen: “Like I Used To”

Two titans of the indie world—songwriters Sharon Van Etten and Angel Olsen —shared a new collaborative track, “Like I Used To,” out now on Jagjaguwar. The product of a long-shared admiration between the two artists, the electrifying and anthemic single finds the pair at the top of their craft, constructing walls of tender guitar chords over which their voices soar. Fundamentally a song about the reclamation of one’s own space and personal identity, “Like I Used To” lyrics such as “Lighting one up like I used to / Dancing all along like I used to” feel like an echo of personal catharsis, especially among the dramatic arpeggios and synth pads at the song’s emotional peak. —Jason Friedman