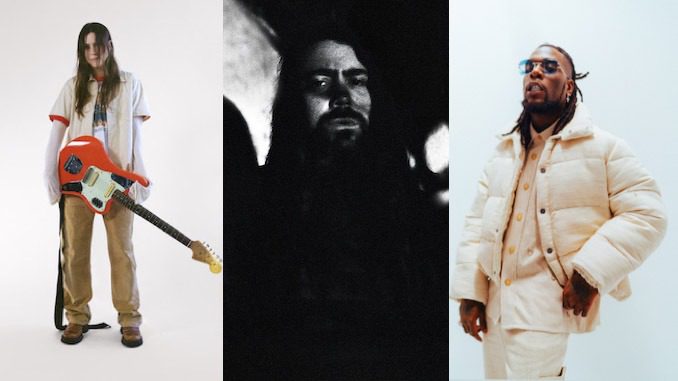 Outside is calling, and they want you out of the house. April’s showers are bringing out May’s flowers with a variety of tracks that usher in a summer that is starting to feel normal. Burna Boy’s infectious afrobeat dance anthems is a late-night barbecue must, and kezia’s “south!” marks sundress season’s triumphant return. Here’s ten songs that we can’t stop bumping this week.

Baba Ali’s debut after signing with Memphis Industries is a rousing introduction to the influences in his effortlessly cool dance music. Though the artist is currently based in London, the New Jersey native’s steps to get there are felt throughout the track: the hip hop and rap streaming in from New York City on his radio, the electrifying techno from his time in Berlin, the punk heritage of his current East London home and his Nigerian heritage all blend to an exhilarating effect on “Black Wagon.” The song celebrates the feelings of pure life Baba Ali seeks within the rave scene, chasing that joy before the “black wagon” comes to haul us away—and that joy is insanely infectious on his latest track. —Carli Scolforo

Burna Boy’s star power is what has made his lively full-body afro-fusion bangers feel like an experience. The Grammy winner’s newest single since his momentous win, “Kilometre,” reflects on his rise to fame over the percussion-heavy beat and faint victorious horn blares. It speaks to the universality of Burna Boy’s music and the power of dance, which is well suited for an optimistic summer. —Jade Gomez

Doss: “On Your Mind”

Beloved electro-pop pioneer Doss is queueing up for her first release in seven years, 4 New Songs EP. The final single “On Your Mind” has her signature pitched-up bubbly vocals, thumpy bass that nuzzle into the depths of speakers, and is a love letter to eurodance’s brightest and cheesiest in her own sophisticated way. Her looping vocals repeat “Feels so good inside/ when you’re on my mind” and evoke a heartwarming feeling of longing similar to the late, great SOPHIE’s “Just Like We Never Said Goodbye.” Doss’ return brings the genre back to the fundamentals.—Jade Gomez

Rock supergroup Fiddlehead’s third single “Down University” takes us back to school ahead of their sophomore album, Between The Richness. The band’s academic roots are lively and present, as frontman Patrick Flynn took up a job teaching high school history after the disbanding of his former project Have Heart. Perhaps this day-to-day experience, besides the drawing from his own memory as a high schooler, can be cited as the source of the angst-tinted youthful exuberance that radiates from the latest single. From young voices offering a peppy backing chant in the song to a slight pop-punk twang, touches of nostalgia color the noisy and boisterous creation. —Carli Scolforo

When asked about their newest single in a press statement, Health replied “It’s fucking Nine Inch Nails. That speaks for itself. You don’t need a clever quote to encapsulate it.” Produced by both bands, and mixed by Atticus Ross, “ISN’T EVERYONE” is a dark and brutal electronic epic. Trent Reznor takes the first verse, growling “All the little piggies cannot help themselves” over pulsating bass and electric guitar grind before joining voices with HEALTH’s Jake Duzsik on the song’s bleakly nihilistic choruses: “Nothing matters / We’re all to blame / We lie surrendered to those we serve / We get the world we all deserve.” But it’s Duzsik who delivers the song’s ultimate kicker: “Are you alone? / Isn’t everyone?” It’s a perfectly nihilistic song to get you through the summer, if that’s your thing.—Scott Russell

Hot girl summer is in for a sequel, and kezia’s “south!” which features contributions by British rapper NAYANA IZ. kezia’s cool-girl whisper rap beckons a closer listen over the minimalistic trap beat, making the two musicians command the track as an anthem of sexual energy and empowerment. “In a world where black women are uninvitedly sexualized, we need to take ownership of feeling strong and cemented in our sexuality,” kezia says, and the track is a Y2K-tinted reminder of that strength. —Jade Gomez

Laura Marling and Mike Lindsay of Tunng formed LUMP in 2018, and their anticipated sophomore album Animal’s title track is a stunning single that shows why the two are a match made in heaven. Marling’s sparse folk vocals juxtaposed against Lindsay’s stunning deconstructions of digital sound into their most bare create an unlikely match that sound superficial but open up into so much more. It’s a tongue-in-cheek critique on consumerism, hedonism, and superficiality in a way the two can create without sounding pretentious, making for a song that crosses into countless territories. —Jade Gomez

The Marías have finally put out the first single ahead of their highly-anticipated debut album. The fourpiece have already gained a fair amount of attention for the hazy dreampop found on their previous singles and EPs, and “Hush” continues to develop their talent for breathy, hypnotic jams. Though “Hush” is sung entirely in English, frontwoman María Zardoya will bring her bilingual talents to the rest of the album as she has in previous work like “Cariño.” The new single also marks the band’s debut for Nice Life Recording Company and Atlantic Records. —Carli Scolforo

Overcoats ft. Lawrence Rothman: “Blame It On Me”

Overcoats are heartachingly beautiful on their latest single “Blame It On Me.” The somber love song finds the indie-pop duo as perfectly synchronized in their vocals as ever, with an added fullness thanks to Lawrence Rothman’s harmonies on the low end. The instrumental feels minimal yet cinematic, with ambient synths emphasizing the sense of desperation to keep a relationship together that the lyrics express. The latest showing from Overcoats is the second ahead of their forthcoming EP Used To Be Scared Of The Dark, and the music video picks up exactly where the love story in the video for previous single “The Hardest Part” left off. —Carli Scolforo

Pet Fox is part of the longstanding Boston indie rock scene, and “Imagine Why” is a succinct statement of their lineage. Leaning into their poppier side, the single explodes into euphoric hooky bliss of drums and guitars. Pet Fox is growing as a go-to live band, playing with Paste favorites such as Crumb and Bully, and this track shows that universal prowess.—Jade Gomez