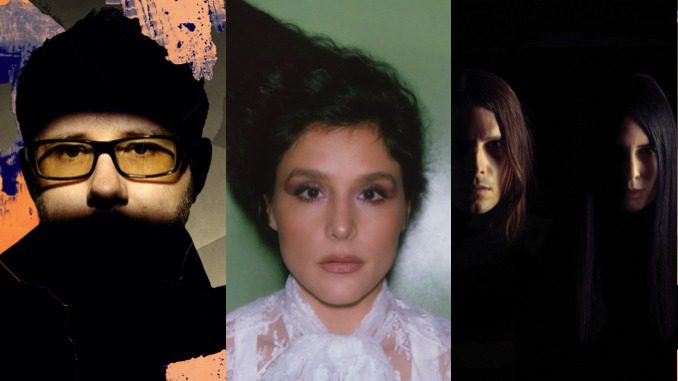 We’re just about ready to unveil our picks for the best albums and songs of April, as well as our most-anticipated releases of May. But for now, our focus is on the best tracks of the past seven days, which include the first new song from The Chemical Brothers since 2019, a jam from Jessie Ware’s forthcoming deluxe edition of What’s Your Pleasure?, the latest Squid single ahead of their debut album Bright Green Field and more. Music fans are eating this week—dig into our top track picks below.

The Chemical Brothers: “The Darkness That You Fear”

Tom Rowlands and Ed Simons, better known as The Chemical Brothers, offered up an optimistic new song on April 23. “The Darkness That You Fear” is the duo’s first single following their Grammy-winning 2019 album No Geography. The Chemical Brothers’ dreamy psychedelia ripples around two different vocal samples, complemented by a subtle, joyful dance beat that underlines the mentality behind the refrain: “The darkness that you fear will disappear.” The track looks ahead to the better days coming, hopefully soon, as the country (and, eventually, the world) begins to recover from the pandemic. Reflecting on the song, Rowland said, ”’The Darkness That You Fear’ is a hopeful piece of music. When we found the combination of the different voices worked set to the flow of the music, it made us feel optimistic—like it was something we wanted to share.” —Carli Scolforo

Cold Cave just get the unique aura of 1980s post-punk and goth music in a way that very few acts are able to replicate. “Prayer From Nowhere” is no different, with the reinventions of each release resting in the subtleties of the synths and drums throughout the group’s career. Cold Cave’s de facto leader Wesley Eisold possesses that dark, brooding voice tinted with sensuality that makes all of their music so alluring. The hissing industrial drums are reminiscent of Pretty Hate Machine-era Nine Inch Nails, ushering in a darker sound for the group to explore as they expand their repertoire. “Prayer From Nowhere” is a refreshing reminder of what once was, sounding like a love letter, rather than a reenactment. —Jade Gomez

Queens native duendita’s second release of the year is a gorgeous, swirling piece that defies easy categorization. Her voice brings soulful R&B to a psychedelic “existential dance song… reflecting on a distaste for involuntary experiences as a human,” as the artist herself described in a statement. “Bio” (pronounced bee-yo according to duendita’s helpful ‘90s-inspired educational video) is complex and dynamic, sometimes favoring organic sounds like piano and bass and other times allowing chill-inducing sonic textures to take the spotlight. duendita elaborated in her statement that the song entertains the idea that one must “find/cultivate joy in order to survive,” and her four-minute-long exploration seems to do just that. —Carli Scolforo

On the heels of her excellent 2020 EP Rain Dance, London-based bandleader, multi-instrumentalist, vocalist and producer Emma-Jean Thackray will deliver her debut album Yellow on July 2 via her own Movementt label. Lead single “Say Something” is a vivid explosion of funk, jazz and dance music, building from hi-hat taps and synth chords to a dance floor-filling 4/4 beat amid celestial, swirling keys and vocal harmonies. “Don’t just speak / Say something,” Thackray and her band insist, calling on anyone who would mistake motion for action to aim higher, with universal togetherness and connection as the bullseye. —Scott Russell

Polyvinyl Record Co.’s latest signing is unGoogleable Melbourne duo Good Morning, i.e., Stefan Blair and Liam Parsons, who marked their addition to the Illinois-based indie label with their first new songs in two years, “Mollyduker” and “Keep It.” Both are worth your time, but it’s the latter, sung by Parsons, that stands out to us, a warm, Wilco-esque amalgam of indie pop and alt-country described in a press release as “a meditation on failure, drinking and aging.” While Parsons dwells on “the stupid shit I said over the years,” acoustic guitars amble onward over barebones bass and percussion, sharing space with twangy electric riffs and well-placed keys. Parsons calls the song “an ode to stasis,” but Good Morning are on the move, thanks in part to their ability to render regret’s aches and pains in such soothing song. —Scott Russell

Jessie Ware’s What’s Your Pleasure? was a rare instance of nostalgia sounding fresh. The British singer’s ability to tap into such a rare, universally appealing groove landed her album on multiple year-end lists, ours included. “Please,” off the forthcoming deluxe version of the album, yearns for a return to the clubs Ware was anticipating her album filling before the pandemic took over as she sings, “I want a place / Where golden moments last forever.” Produced by James Ford of Simian Mobile Disco, Ware’s soft-spoken flirtations can be heard over even the deepest of bass as she creates these gorgeous utopias of dance and sound. It’s a song that foresees better times, on a deluxe version of an album that will accompany us through them. —Jade Gomez

Mattiel’s latest song “Those Words” is an exercise in simplicity. Taking cues from bands such as The Cure and The Smiths, this indie anthem slowly boils to a satisfying, comforting peak. The Atlanta-based band combine their bouncy guitars and drums with lead singer Mattiel Brown’s rich, commanding vocals for a warm and inviting tale of “choosing who to give you energy to,” as Brown reflects in a statement. In the sea of brooding acoustics and high-intensity punk songs filling summer playlists, “Those Words” is a great song to cool down to. —Jade Gomez

Richmond, Virginia’s McKinley Dixon has been a fixture on our Best New Songs lists in the lead-up to his much-anticipated new album, For My Mama And Anyone Who Look Like Her, out May 7 on Spacebomb. The record’s fourth and final single might just be its best: Loosely inspired by Toni Morrison’s God Help The Child, “Bless the Child” finds Dixon traveling through time to process a lifetime of loss, regret and love, with rich instrumentation reflecting each stage of his journey. Over Timothy Erbach’s urgent bass and spectral backing vocals from Jaylin Brown and Ali Thibodeau, Dixon catches up with a fallen friend in a bittersweet dream, but later looks inward with anger, “starting to regret not being more of a threat / ‘cause then you could just protect the ones you love.” Easy answers evade him as he reckons with cycles of violence (“Watch them cut down a family tree in just one night” is a particularly searing line), transforming his pain into ambitious, life-affirming art. —Scott Russell

mui zyu is the new solo endeavor of Eva Liu, singer of indie-rock band Dama Scout. Her debut single, “pour a brain,” is a lo-fi dream, with Liu’s voice serving as another instrument that weaves in and out of the buzzy synths and muffled keyboards. Liu glides between the unsettling and the beautiful, with small moments of disarray making their way to the surface. Liu shows the power of restraint in her debut single, and the beauty in a little chaos. —Jade Gomez

Buzzy U.K. rock act Squid’s debut album is close at hand, and ahead of Bright Green Field’s May 7 release via Warp Records, the band shared another new single, “Pamphlets,” and announced their first-ever U.S. tour. The track finds Ollie Judge and company attempting to bottle the lightning that is their live-show energy, which translated into one of Paste’s favorite performances of SXSW 2021. Drummer, vocalist and lyricist Judge says of “Pamphlets” in a statement, “It’s about all the rubbish right-wing propaganda you get through your front door. It imagines a person with that as their only source of news being taken over by these pamphlets.” Both Judge’s vein-popping vocals and the band’s edgy instrumentation build to an explosive crescendo, like paranoia and isolation straining and ultimately fracturing an already-tenuous grasp on reality. —Scott Russell