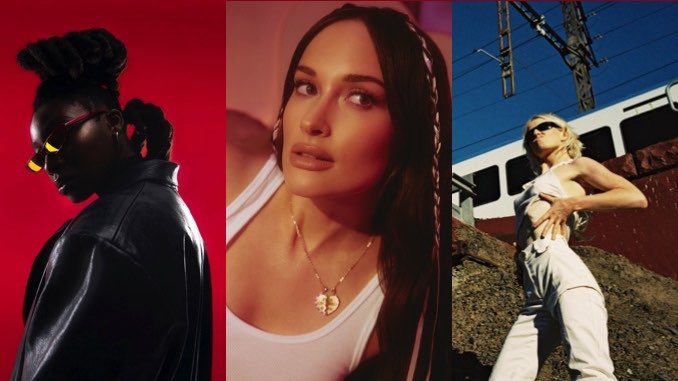 Time is funny in 2021—September ended less than a week ago (hope someone woke up the Green Day guy), yet it feels so remote already. What makes those 30 days more immediate are all the excellent records that were released within them, 10 of which we’re uplifting on this very list. Plenty of September releases made themselves at home in our streaming queues, browser tabs and so on, but it was the new albums from London’s Little Simz, Nashville’s Kacey Musgraves, and Melbourne, Australia’s Amyl and The Sniffers that most staunchly refused to relinquish the Paste Music team’s attention. Find our picks for the 10 best albums of September below.

Listen to our Best Albums of September 2021 playlist on Spotify here.

Amyl and The Sniffers: Comfort to Me

Melbourne, Australia punk quartet Amyl and The Sniffers are back with their barn burner of a sophomore album, the follow-up to their 2019 self-titled debut. Amy Taylor and company co-produced Comfort to Me with Dan Luscombe, writing their new record during Australian Bushfire season, not to mention COVID-19 quarantine. The result is ferocious, melodic punk rock that seems to push in every direction at once, but the band’s explosive energy belies a surprising degree of heart: “I’m not looking for trouble / I’m looking for love,” Taylor sings on “Security,” somehow managing to maintain a pocket of serenity in the eye of the band’s chaotic storm. “This album is just us—raw self expression, defiant energy, unapologetic vulnerability,” Taylor said in a statement. “It was written by four self-taught musicians who are all just trying to get by and have a good time.” —Scott Russell

Since becoming a band almost a decade ago, Bad Bad Hats (Kerry Alexander, Chris Hoge and Con Davison) have been grinding as one of the most low-key, beloved acts amongst Minnesota DIY royalty. With an affinity for mid-’90s garage-rock choruses, pop-punk lyricism and glazed vocals, the trio stake their sound in stories of nostalgia and honesty fused with bouncing melodies you can’t get out of your head. Whether you discovered the group through the eternal perseverance of their early hit “Super America,” Spotify-curated playlists, or their supporting stints on tour with The Front Bottoms, Hippo Campus and The Beths, they have lived on through multiple eras of indie rock already, with their signature still intact and translated to perfection on Walkman, their first release in three years and strongest to date. —Matt Mitchell

The Body and BIG|BRAVE: Leaving None But Small Birds

Leaving None But Small Birds, which consists of re-worked traditional songs and hymns from Appalachia, Canada and England, casts both The Body and BIG|BRAVE in a whole new light that should nevertheless resonate with both fanbases and endear them both to listeners who might otherwise be put off by the forcefulness of their respective catalogs. By the time any guitar distortion eases its way in about halfway through the song sequence, the transition is so gradual that it makes perfect sense, announcing itself in a most unobtrusive fashion. Both bands have hit their audience over the head with jagged contrasts in the past, but here they pace the music so that there’s a gradual, almost imperceptible incline in heaviness. Indeed, everything about Leaving None But Small Birds bears a deliberate attention to detail. Even fans of BIG|BRAVE and The Body might not necessarily think of them as aspiring masters of craft, but there’s no other way to see them now after this collaboration. With the insistent, shanty-like cadence of “Oh Sinner,” for example, the two groups mimic the hypnotic drone that’s become BIG|BRAVE’s stock in trade, but together they prove that they can be just as powerful with the volume turned way down. —Saby Reyes-Kulkarni

Fusing the soul of indigenous Afro-Caribbean sounds with the pulse of dance music, Bomba Estéreo have grown tremendously within the electro cumbia sub-genre that they helped craft. Now on their sixth album, Deja, they’re building on their bombast with a purpose. “Ahora” is nothing short of a perfect production from Simon Mejia, with birds chirping over tropical synths while singer Li Saumet delivers her usual energy-driving vocals. There’s an intentional interconnectedness within the album’s four elemental movements of “Agua” (Water), “Aire” (Air), “Tierra” (Earth) and “Fuego” (Fire), and a commitment to unity through movement on the multi-dimensional drums of the aptly titled “Tamborero” (Drummer). Few can reproduce the energy of Bomba Estéreo and Saumet says it’s an authentic expression of their bond with the natural world around them: “We made this album so you can dance to it at a club, but at the same time it has a profound meaning.” —Adrian Spinelli

For as long as Kacey Musgraves has been writing great songs, she’s been delivering the dark with the light, the good with the bad. You can hear that juxtaposition on “Merry Go ‘Round,” the bittersweet melody about universal letdowns from her high-kicking debut Same Trailer Different Park, or within Golden Hour’s cautiously optimistic “Happy & Sad.” So it shouldn’t be a surprise—or a disappointment—that on star-crossed, her follow-up to 2018’s boundary-smashing Golden Hour, Musgraves dwells a bit more on the dark. What she calls a “modern tragedy,” star-crossed chronicles her divorce from fellow country auteur Ruston Kelly in three acts: their relationship’s demise, the dismantling, and then the path forward. She again recruited Golden Hour producing pair Daniel Tashian and Ian Fitchuk to work their magic on star-crossed, and while the result can’t quite touch the otherworldly iridescence of Musgraves’ magnum opus and Grammy Album of the Year winner (though, to be fair, few albums can), star-crossed is still a hell of a listen. And more importantly, it finds Musgraves chasing what it seems like she ultimately wants most: unbridled creative freedom. —Ellen Johnson

While artists like Skepta and Dave have come to define the future sound of British rap, it’s Little Simz who might very well leave the most lasting mark this year. Her single “I Love You, I Hate You” is one of the best all-around tracks of 2021. Produced by Inflo (who has had nothing short of a Midas touch on his work with SAULT, Michael Kiwanuka, Cleo Sol and Jungle), the song finds Simz sliding into each bar with dense lyricism that’s just flat-out impressive on a pointed track about her maligned father; there’s opening yourself up by being vulnerable and then there’s this:

Never thought my parent would give me my first heartbreak (I hate you)
Anxiety givin’ me irregular heart rate (I love you)
Used to avoid gettin’ into how I really feel about this (I hate you)
Now I see how fickle life can be and so it can’t wait (I love you)
Should’ve been the person there to hold me on my dark days (I hate you)
It’s easier to stargaze and wish than be faced with this reality (I love you)
Is you a sperm donor or a dad to me?

There’s emotional outpourings like this at every turn of Sometimes I Might Be Introvert, but it always sounds so grandiose. She’s as confident on the mic as they come and you can feel the cold, hard gaze in her eyes when she’s delivering lines like the one above. You vibe hard with how cool she is on “Woman,” saying, “Brooklyn ladies, know you hustle on the daily / Innovatin’ just like Donna Summer in the ‘80s.” She’s rapping for women, she’s rapping for Black women, she’s rapping for women all around the world, and she’s rapping for people who can appreciate how the hip-hop art form is built for marginalized voices to rise up. There’s broad appeal to her overall aesthetic, too, and now on her fourth album, Little Simz is poised to highlight the mighty British rap scene for good. —Adrian Spinelli

After what sounds like a mechanical bull backfiring inside a hall of mirrors, Alan Sparhawk and Mimi Parker light the whole cow on fire and let it explode. On “White Horses,” the opener of Low’s 13th album HEY WHAT, Sparhawk’s voice and guitars are among the loudest and clearest they’ve been across 13 albums spanning nearly three decades, with Parker’s harmonies not far behind in heft and lucidity. If the ever-mercurial married duo (HEY WHAT is technically the first album Low created as a duo—Steve Garrington, their fourth bassist, departed last year) have long sounded listless and adrift amid myriad moments of personal and political uncertainty, HEY WHAT reimagines Low as a vehicle for powerhouse vocals, high-Richter-scale distortion and blink-and-you’ll-miss-it percussion. The duo’s recent fascination with 21st-century disconnection continues, but the bombast is louder and the tranquility is quieter, and in focusing on lucid melodies and unobscured fidelity, they’ve created their most visceral work yet. —Max Freedman

Danny Brown’s Bruiser Brigade Records is on a roll in 2021, as they shape up to build a rap empire the likes of No Limit, Cash Money, Suave House and more. Next up on the roster is Quentin Ahmad DaGod’s N.O.A.H., a scrappy and scathing Detroit rap gem. DaGod is rough around the edges, painting bleak pictures and pairing clever rhymes reminiscent of the ’90s golden age of gangster rap with his own regional flair. Raphy’s smooth, soulful production sets a lush backdrop for DaGod’s distinct delivery and undeniable talent. N.O.A.H. adds another facet to the multi-dimensional Bruiser Brigade crew, rounding out their wide array of styles with a more grounded, classic scruff. —Jade Gomez

Saint Etienne: I’ve Been Trying To Tell You

Thirty years on since Saint Etienne’s hypnotic debut Foxbase Alpha, the English band still find ways to reimagine their wistful trip-hop sound. Their 2021 offering I’ve Been Trying To Tell You is a nostalgic collection of elegant vignettes capturing the last period of optimism and peace in the U.K. from 1997 to 2001, according to band member Pete Wiggs. The result is euphoric, with vocalist Sarah Cracknell’s voice looping endlessly until it blends into the delicate keys and synths. Likewise, recognizable samples, such as some by Natalie Imbruglia, are chopped and reimagined into unrecognizable forms that still evoke a sense of familiarity. Saint Etienne manage to capture peace with an underlying sense of unease, offering a moment, a loop or a hook to meditate on in trying times. —Jade Gomez

Spirits Having Fun make spindly, unpredictable music that dwells in the gray area between post-punk, jazz and math rock. With members based in both Chicago and New York City, distance-born collaboration shapes the band’s work. However, where some artists might view thousands of miles of separation as a creative challenge, Spirits Having Fun embrace it, and they thrive. Distinct elements of both Midwest indie and Northeastern experimentation seep through on the band’s sophomore album, Two. You can hear echoes of Windy City acts like Moontype and Floatie in its spindly intricacy, but it simultaneously brings to mind the freewheeling, swirling work of Big Apple stalwarts like Standing On The Corner and Onyx Collective. Jumbling a myriad of styles and feels throughout the record’s 42-minute runtime, Two can be a hectic affair, like watching sped-up footage of a major thoroughfare during rush hour. However, it’s this penchant for heady intensity that keeps the album gripping and singular. —Ted Davis