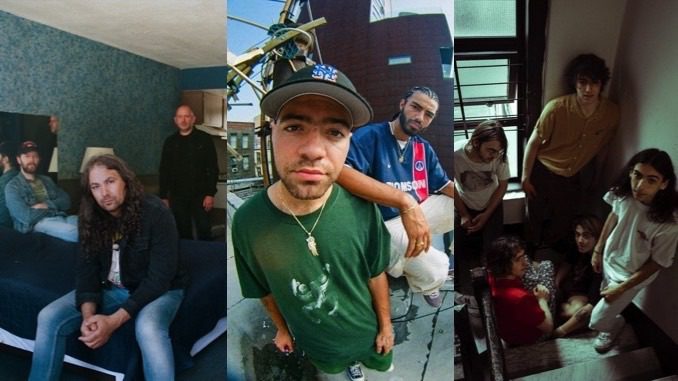 Don’t look now, but we’re already in the home stretch of 2021, with only the holidays standing between us and a shiny, new year. That means many things—namely, that Best of 2021 honors are right around the corner—but we’re not getting ahead of ourselves just yet, instead shining a light on the best releases of last month. October gave us perhaps the best records yet from The War on Drugs and Wiki, as well as an undeniable debut from Geese. Gritty hip-hop, glossy synth-pop, explosive emo—it’s all here, and then some. Find the Paste Music team’s top October albums below.

Listen to our Best Albums of October 2021 playlist on Spotify here.

Eternal Home is the most expansive statement yet from Chicago-based producer, composer and multi-instrumentalist Angel Marcloid, who records as Fire-Toolz, among other monikers. The prolific artist’s seventh full-length since 2015 is a 78-minute double album that seems to defy time, not to mention genre classification, sweeping you into a whirlwind of ambient, yet melodic, Oneohtrix Point Never-esque electronics, operatic prog percussion, caustic black metal vocals and heavy shoegaze guitars. These elements collide to particularly mesmerizing effect on standouts like “Odd Cat Sanctuary” and “Thick_flowy_glowy_sparkly_stingy_pain.mpeg,” demonstrating the unconscious precision of Marcloid’s vision. Eternal Home makes, say, hyper-pop feel quaint, treating experimental sounds not as a fashion statement, but as a governing principle. If you have yet to wander into the topsy-turvy world of Fire-Toolz, there’s no time like the present. —Scott Russell

Teenaged Brooklyn rockers Geese grabbed our attention with their stellar first single over the summer and, with the release of their much-anticipated debut album Projector, show zero signs of letting it go. The quintet’s sound fits most comfortably in the post-punk bucket, but placing any one descriptor on it is a mistake—Geese’s raison d’être is stylistic multiplicity, and their songs never occupy a single space for long, shifting fluidly between angular precision and psychedelic sprawl, all while remaining perpetually danceable and energetic. Frontman Cameron Winter’s lyrics inhabit the perspectives of various shadowy characters, spinning tales of anxiety and annihilation that imbue the band’s mercurial instrumentation with a gripping darkness. All told, Projector is an exhilarating first statement from a preternaturally talented band, bottled rock lightning with roots in decades of compelling musical influence. —Scott Russell

Synth-pop duo Magdalena Bay, aka Mica Tenenbaum and Matthew Lewin, have fully embraced the secret blessing of the pandemic. Following the unfortunately timed release of their 2020 EP A Little Rhythm and a Wicked Feeling at the cusp of lockdown, the ensuing isolation gave time for the EP to resonate with fans, leading to a growing support system that crystallized into the hype for their debut album Mercurial World. The duo fully embrace the changing tides of pop music via their take on bubblegum and electro-pop with the vulnerability of Gwen Stefani and the infectious hooks of Grimes, two influences the group regularly circle back to. Mercurial World finally offers the space for the two to sink their teeth into the ideas touched upon in their previous projects, with a newfound vigor that only a global crisis could incite. —Jade Gomez

Maxo Kream: Weight of the World

Its release date was a moving target for a minute there, but Maxo Kream’s much-anticipated album Weight of the World officially arrived on Oct. 18 via Big Persona/88 Classic/RCA Records. The 16-track LP pays tribute to the rising Houston rapper’s late brother, Mmadu Biosah. “I put my all into this album and then sum. RIP To my brother,” Maxo tweeted upon its release. Weight of the World features guest spots from Tyler, The Creator (“Big Persona”), A$AP Rocky (“Streets Alone”), Freddie Gibbs (“What I Look Like”), Monaleo (“Cee Cee”) and Don Toliver (closer “Believe”). Maxo’s Brandon Banks follow-up was preceded by three singles, “Local Joker,” “Big Persona” and “Greener Knots”—we praised “Big Persona” among the best songs of September. But the album is a must-listen from top to bottom, a breakout effort in which Maxo Kream demonstrates the strength required to carry the Weight of the World on your shoulders. —Scott Russell

Despite their mainstream breakthrough three years ago, and the more widespread critical acclaim that came with it, Parquet Courts remain vocal critics of their industry. Their faces aren’t on Amazon Prime boxes and they aren’t in TikTok advertisements. They sell out tours, but they haven’t sold out, and while other acts have spent lockdown making more introspective records, Parquet Courts emerge from their quarantine with Sympathy for Life—still keen on unleashing their trademark woozy, brash and fearless desecrations of star quarterback legacies and capitalist moguls. Co-frontman Austin Brown describes it best: “Wide Awake! was a record you could put on at a party. Sympathy for Life is influenced by the party itself.” The latter’s jabs are unintentionally tailored to pandemic gripes and their residual effects—packaged as a record that’s the kind of groove you’ve got to sit down and appreciate. It’s the group’s Talking Heads fever dream: a mirage of thought-provoking, unforced, anti-fascist rock and roll written during acid trips and exercise routines, all slapped atop addictive instrumentals. —Matt Mitchell

Remi Wolf is one of pop’s most exciting acts in recent memory. Following a series of EPs beginning with 2019’s You’re a Dog!, Wolf has since gone on to collaborate with everyone from Beck to Nile Rodgers, thanks to her joyfully eclectic brand of soul and funk. Her debut album Juno was preceded by a hefty amount of singles, which utilize the same palette in an ever-changing kaleidoscope’s worth of ways. Whether singing about ordering Chuck E. Cheese on Postmates or calling herself a “thrift store baddie” on “Liquor Store,” Wolf’s brand of humor is just as tapped into current culture as someone like Lil Nas X’s, if not a little more crude and surreal. Wolf has most of the pieces in place to become the next big thing, and Juno is the final one. —Jade Gomez

On I Don’t Live Here Anymore, The War on Drugs had a decision to make at the metaphorical fork in the road: Would they continue down the path of being a successful—albeit predictable—guitar band, or take a risk and produce work outside of their wheelhouse? Somehow, the answer turned out to be both. Like Wagonwheel Blues before it, the bones of I Don’t Live Here Anymore are strong and sturdy, but its execution is more nuanced, more daring, more personal. Adam Granduciel has always sung as if his lips were pressed to someone’s ear and that intimacy remains intact, particularly in the album’s most vulnerable moments. The tenderness on opener and lead single “Living Proof” is wrapped in lush piano chords and simple lyricism about feeling foreign to a place you once called home. But the most thrilling parts of the LP are in the center, the space where The War on Drugs feel free enough to deviate from the expectations that made them mainstream darlings. Over the past 13 years—and with each project—The War on Drugs have continuously grown into fuller and more realized versions of themselves. I Don’t Live Here Anymore is fitting for their newest form: revered musicians with over a decade of quality music under their belts who never lost sight of the prize. —Candace McDuffie

The World Is a Beautiful Place & I Am No Longer Afraid to Die: Illusory Walls

The World is a Beautiful Place & I Am No Longer Afraid To Die have a flair for the dramatic, if their name is anything to go off. Noted as one of the main bands that brought emo into the spotlight again (and for all the purists out there, yes, we mean ’90s emo and not early-’00s pop-punk/emo), TWIABP capitalize on the emotions present in the pandemic in releasing Illusory Walls. As they settle into their new lineup as a five-piece, their chemistry shines. Fuzzy guitars explode into ear-shattering feedback that cradles gorgeous vocal melodies. TWIABP craft a brilliant, immersive and surreal world on Illusory Walls, juxtaposing inevitable doom with sweet optimism. —Jade Gomez

Five years on from her second album Black Terry Cat, Xenia Rubinos shows the value in waiting. Her third album, Una Rosa, is a welcome treat after such a long period of silence. Combining Cuban boleros with synths and drums marries what seem like two opposite sides of her world, creating an album rife with experimentation without feeling alienating. Rubinos dances between English and Spanish, layering mind-bending harmonies and clashing melodies in such a breathtaking way. Rubinos’ artistry will only continue to expand from here. —Jade Gomez