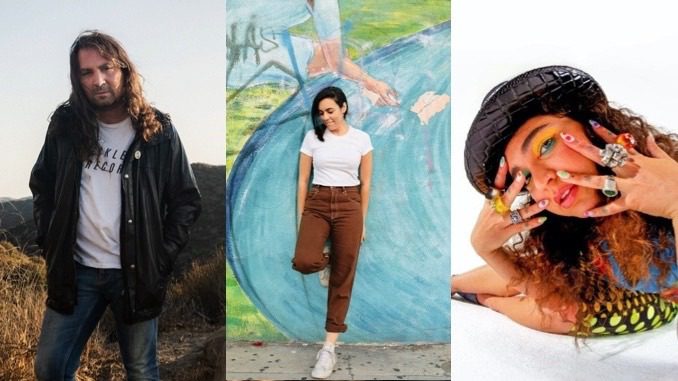 Paste Music’s album previews are always particularly difficult pieces to assemble. You’d think it would be easy, breaking down the 10 forthcoming records we’re most eagerly anticipating, but you’d be wrong—especially this October, which is perhaps the single most stacked release month in recent memory. There are dozens of impending releases with the power to stop the Paste Music Slack channel in its tracks—we could have easily pulled this piece together using Oct. 22 releases alone. The overwhelming quality and quantity of this upcoming month’s slate is a glowing testament to the albums we selected, which include The War on Drugs’ long-awaited blockbuster, a deliriously freewheeling illuminati hotties album and the technicolor funk-pop party Remi Wolf is throwing. Dive into an October for the books below, with special attention to the overflowing “more notable releases” sections, and keep your eyes peeled for Paste Music’s September favorites, coming next week.

There’s a distinctive charm to bands like Brooklyn quintet Gustaf, who craft a slickly stylish, fully realized rock sound while flatly rejecting pretension and self-seriousness. Like DEVO or Talking Heads before them, Gustaf deal in clever, irresistibly upbeat art-rock that’s as playful as it is thoughtful, with an LCD Soundsystem-esque dance-punk edge to keep the energy and intrigue up. Tine Hill (bass), Vram Kherlopian (guitar), Melissa Lucciola (drums), Tarra Thiessen (vocals, percussion) and Lydia Gammill (lead vocals) recorded their forthcoming debut album with Carlos Hernandez (Ava Luna, Sneaks, Mr. Twin Sister) at Brooklyn’s Honey Jar Studio, with co-production from Gammill and Hernandez, and its singles have made Gustaf a fixture on Paste’s top track roundups of the past couple months. Their potential is plain to hear, and we can’t wait to see how it manifests in full-length form. —Scott Russell

illuminati hotties: Let Me Do One More

As illuminati hotties, Sarah Tudzin seems relentlessly committed to perfecting the subgenre she coined, “tenderpunk,” and creating an album worth waiting for. After the success of their debut, Kiss Yr Frenemies, she and her band were tediously crafting their follow-up until relations with their label crumbled. illuminati hotties found themselves in a contract to release an album without the infrastructure they desired and in a very punk-like fashion, they released the surprise-streaming Free I.H.: This Is Not The One You’ve Been Waiting For. Tudzin clearly knows what she wants, and with each album, illuminati hotties keep getting closer to their end goal. There are no brakes on Let Me Do One More—rather, it is more like a sprightly roller coaster, with mellow gaps in between punchy electronic tracks creating arcs bound to give out an exhilarating sort of whiplash. Fury meets romantic longing, sneering meets sincere whispers, and calmer sounds meet the abrasion of others. And while that sounds like a large feat, to mingle these opposites, illuminati hotties bounce between them with great precision. —Ana Cubas

Lala Lala: I Want the Door to Open

On the third Lala Lala album, Chicago’s Lillie West is taking a monumental artistic leap and it’s working on every level. Each of the singles in the lead-up have been an absolute thrill. “DIVER” is an extravagantly arranged number that teems with gorgeous vocals, big drums (from fellow Chicagoan Nnamdi Ogbonnaya) and a beautiful violin (from OHMME’s Macie Stewart, also from Chicago). “Color of the Pool’’ feels like a leather jacket-clad motorcycle ride into the night (hat tip to the spot-on video, below) with a build-up of synths and saxophone explosion from Landlady’s Adam Schatz. It’s the peak of the album’s lyrical hallmark of dissecting the ins and outs of the inter/intrapersonal dynamic, as West sings: “And yes you know I love it / When we are both looking straight at me / But I’m feeling multiplied / Feeling far away from what I need.” The mirror analogy is apt imagery for conversations we have with ourselves while trying to make sense of connection, and West has tapped into a quality that great artists possess: the ability to consciously make yourself a vessel for listeners to confront the inner truths, doubts and hurdles that we face in our daily lives so that we can grow. This is some of the best music of the year. —Adrian Spinelli

Synth-pop duo Magdalena Bay, aka Mica Tenenbaum and Matthew Lewin, have fully embraced the secret blessing of the pandemic. Following the unfortunately timed release of their 2020 EP A Little Rhythm and a Wicked Feeling at the cusp of lockdown, the ensuing isolation gave time for the EP to resonate with fans, leading to a growing support system that crystallized into the hype for their impending debut album Mercurial World. The duo fully embrace the changing tides of pop music via their take on bubblegum and electro-pop with the vulnerability of Gwen Stefani and the infectious hooks of Grimes, two influences the group regularly circle back to. Mercurial World finally offers the space for the two to sink their teeth into the ideas touched upon in their previous projects, with a newfound vigor that only a global crisis could incite. —Jade Gomez

Remi Wolf is one of pop’s most exciting acts in recent memory. Following a series of EPs beginning with 2019’s You’re a Dog!, Wolf has since gone on to collaborate with everyone from Beck to Nile Rodgers, thanks to her joyfully eclectic brand of soul and funk. Her debut album Juno is already accompanied by a hefty amount of singles, which utilize the same palette in an ever-changing kaleidoscope’s worth of ways. Whether singing about ordering Chuck E. Cheese on Postmates or calling herself a “thrift store baddie” on “Liquor Store,” Wolf’s brand of humor is just as tapped into current culture as someone like Lil Nas X’s, if not a little more crude and surreal. Wolf has most of the pieces in place to become the next big thing, and Juno is the final one. —Jade Gomez

The follow-up to 2018’s Grid of Points, Shade promises the sort of luminous beauty that Pacific Northwest artist Liz Harris, aka Grouper, has been conjuring for nearly two decades now. Her 12th full-length spans the better part of that period, as Harris collects songs from the past 15 years in exploration of the ways in which we are influenced by our environments, and vice versa—Harris recorded some portions of the album on the Bay Area’s Mount Tamalpais years ago, and others in Portland and Astoria more recently, stretching Shade across time and place alike. She uses little more than threadbare acoustic guitar, her gossamer vocals and sparing electronic accents to craft “An ode to blue / What lives in shade,” inhabiting the gray area between singer/songwriter-style arrangements and ambient compositions. It’s yet another stunning tribute to the connections that bridge worlds both seen and unseen, a gentle breeze that will nonetheless bowl you over. —Scott Russell

Fun House’s scope is unrelenting. From the muted electronica to the Neil Young-esque Americana, Meg Duffy uses the record to explore parts of songwriting they’d previously dismissed as impossible for them to achieve. The centerpieces of Hand Habits’ last record placeholder (“yr heart,” “jessica,” “pacify”) were all fortified in the same headspace of urgency and timeliness, whereas Fun House, in its entirety, organically sprawls into songs that touch almost every inch of Duffy’s emotional carbon footprint, releasing a battlecry of complexity, while remaining stoic in articulating the human existence without withholding responsibility or romanticizing fallibility. The final line on their debut as Hand Habits, Wildly Idle (Humble Before the Void), was, “When I get new bones / I’m gonna grow.” Now, four years later, Duffy has made good on their promise, reckoning with how society has compartmentalized their identity in a way that no longer feels authentic. Fun House is a record charmingly drunk on the flourishes of autonomy. It touches on grief, suicide and transness with the intent of not letting the listener attribute the entire thing to one of those boxes exclusively. —Matt Mitchell

In many ways, Wet’s Letter Blue is a reintroduction. The band first made waves with their self-titled debut EP in 2013, reaching new audiences in support of CHVRCHES on tour, and landing a deal with Columbia Records, who would release their 2016 full-length debut Don’t You and 2018 follow-up Still Run. But between the muted response to their records and the departure of original guitarist Marty Sulkow, it was fair to wonder whether the band would ever truly deliver on their promise. That’s exactly what Wet, a trio once more, are poised to do with Letter Blue, set for release via AWAL, and featuring collaborations with Toro y Moi’s Chaz Bear, Blood Orange (on “Bound”) and Frank Ocean keyboardist Buddy Ross. Four of the album’s 10 tracks have already been released as singles, revealing a band both recapturing the unrestrained verve of their nascent days, and reaching new heights of hard-won wisdom and maturity. —Scott Russell

We were looking forward to The War on Drugs’ A Deeper Understanding follow-up long before the album’s announcement in July, tapping the album as one of our most-anticipated 2021 releases. The band—bandleader Adam Granduciel, bassist Dave Hartley, multi-instrumentalist Anthony LaMarca, keyboardist Robbie Bennett, drummer Charlie Hall and saxophonist Jon Natchez—recorded their new LP with co-producer and engineer Shawn Everett across three years and seven studios, including New York’s Electric Lady and Los Angeles’ Sound City. So far, all indications are The War on Drugs knocked their comeback out of the park: Singles “Living Proof” and “I Don’t Live Here Anymore” have been among our favorite tracks of recent months, with Granduciel and co. leaning hard into their sweeping, Springsteen-esque heartland rock tendencies, particularly on the Lucius-assisted title track. Live music may still be on shaky ground for a time, but The War on Drugs are seizing their rock ‘n’ roll A-list, main stage moment all the same, with I Don’t Live Here Anymore as their planted flag. —Scott Russell