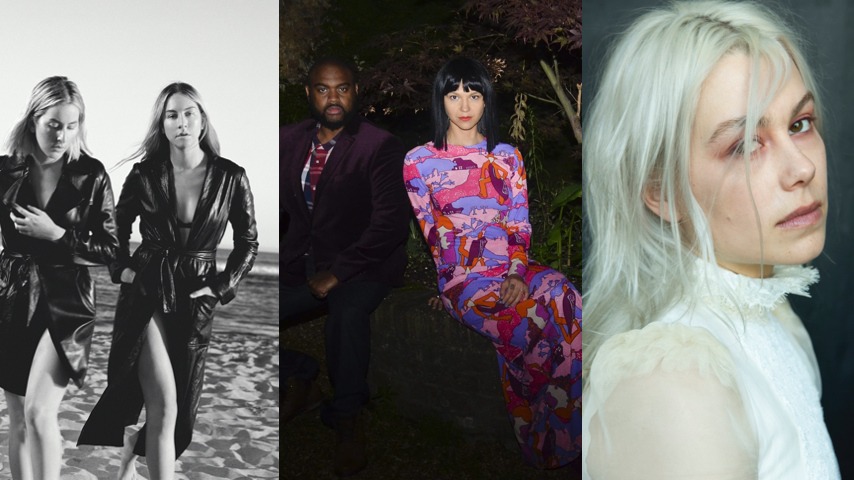 This year has been and continues to be painful for so many reasons, but music still plays, and people still dance. In June, we’re looking forward to new records by rock groups like Hinds, HAIM and Ohmme, as well as a new folk record from one of the genre’s finest and a punk record from one of the most powerful frontwomen around. Get ready for a great month of music, and don’t forget to keep protesting, donating and speaking out about the ongoing Black Lives Matter movement.

Sarah Jarosz: World On The Ground

The debut album from Jehnny Beth is unlike anything we’ve heard from her previous band, the British-based post-punk powerhouse Savages. To Love Is To Live is her most vulnerable work as a musician thus far, as well as a mystifying genre-hopping affair. Produced by Flood, Atticus Ross and frequent collaborator Johnny Hostile, the album features dramatic textures and spans self-reflective piano ballads, sultry electro-pop numbers and industrial rock stompers. It also includes songwriting contributions from The xx’s Romy Madley Croft, a spoken-word passage from actor Cillian Murphy of Peaky Blinders (“A Place Above”) and a vigorous verse from IDLES’ Joe Talbot on the glitchy, dark pop tune “How Could You.” Beth reaches into the deepest corners of her being as she ponders desire, intimacy, power structures and self-doubt, and she delves into each topic with graceful poetry and stark imagery. —Lizzie Manno

More notable June 12 releases: Norah Jones: Pick Me Up Off The Floor, The Aces: Under My Influence, Orville Peck: Show Pony EP

Phoebe Bridgers’ highly anticipated sophomore album Punisher is set to be released this month ahead of singles “Garden Song,” “I See You” and “Kyoto,” which arrived complete with a green screen music video featuring Bridgers soaring over the Japanese city’s skyline. Originally set to be filmed in Japan earlier this year, the global pandemic halted those production plans. But Bridgers opted to cheekily use a green screen in order to create a magical realism-esque video, donning a skeleton-print onesie, gliding on electric train tracks and flying over the ocean. “This song is about impostor syndrome,” Bridgers says. “About being in Japan for the first time, somewhere I’ve always wanted to go, and playing my music to people who want to hear it, feeling like I’m living someone else’s life. I dissociate when bad things happen to me, but also when good things happen. It can feel like I’m performing what I think I’m supposed to be like. I wrote this one as a ballad first, but at that point I was so sick of recording slow songs, it turned into this.” Punisher is the second album from Phoebe Bridgers, but she’s been more than busy since the release of her 2017 debut Stranger in the Alps. She recorded an EP as boygenius with Lucy Dacus and Julien Baker back in 2018, and released a 2019 album with Bright Eyes frontman Conor Oberst as Better Oblivion Community Center. —Natalia Keogan

Like so many other artists who had plans to release music in 2020, HAIM pushed back the planned release date for their new album Women In Music Pt. III from April 24 to June 26, due to coronavirus concerns. While fans may not be thrilled with the delay, the extra time has allowed the band to share a few extra singles, including “I Know Alone,” whose music video included a now fan-favorite sequence of choreography (The band even offered dance lessons on their Instagram!), and the funky “Don’t Wanna.” While their most recent album, 2017’s Something to Tell You, felt something like a foggier, toned-down version of the righteous, atmospheric pop-rock of their critically acclaimed 2013 debut Days Are Gone, these new singles (plus others released in the last year, including the Lou Reed-inspired “Summer Girl” and folksy “Hallelujah”) signal a new era of Haim excellence. With a larger fan base than ever before and a greater sense of their own sonic sensibilities as an album band—not just a band with one great album—HAIM seem poised to release another critical darling, and, if nothing else, a dynamic and honest offering that exemplifies their graceful rise to dynamite rock group. —Ellen Johnson

Khruangbin is a different type of jam band. Across their first two LPs, the Houston trio have made largely instrumental music that feels like a journey through the worlds of Thai soul, Jamaican dub, Middle Eastern funk and more. But now on Mordechai, the group looks to distill their global fusion of sounds with lyrics woven throughout the album for the first time. Coming off of their fantastic Texas Sun collaborative EP with fellow Texan Leon Bridges earlier this year, their lyrics on Mordechai represent a spiritual awakening of sorts for singer/bassist Laura Lee Ochoa. On songs like “Time (You And I)” and “So We Won’t Forget,” Ochoa explores themes related to memories and their potentially fleeting nature. Travel and discovery through music has always been at the center of what Khruangbin creates, and Mordechai promises to be another step in the voyage. —Adrian Spinelli