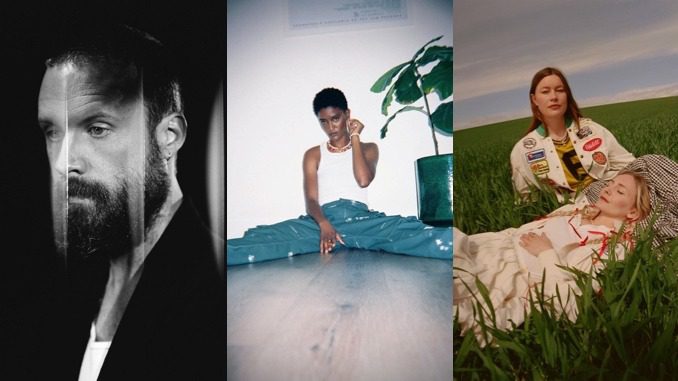 Tomorrow is April 1, which means 24 hours of foolishness and buffoonery. But it also means the first of five New Music Fridays on tap for this coming month, and surely you can imagine where our priorities lie. Impending releases from the likes of Father John Misty, Syd and Wet Leg are both long-awaited and much-anticipated, and though we kept our list to just 10 records like always, there are dozens of albums below the metaphorical fold that also are not to be overlooked, so pay close attention to those “more notable releases” sections. Enough ado: Paste Music’s most-anticipated albums of April are below, and that’s no joke.

PUP: THE UNRAVELING OF PUPTHEBAND

Toronto punk band PUP have promised (or threatened, depending how you look at it) that Morbid Stuff follow-up THE UNRAVELING OF PUPTHEBAND is “not just the next PUP record, but the *most* PUP record.” Based on what we’ve heard up to this point, they’re not lying: “Waiting,” “Robot Writes a Love Song,” “Matilda” and “Totally Fine” see the band at their funniest and most poignant, as well as their most anthemic. Even when a song is written from the perspective of an old guitar dying from neglect or a machine that can’t stand the strain of falling in love, each song blows its subject matter up so it sounds like whatever’s happening is the end of the world. The sheer amount of energy coming off every chorus tells us we have no choice but to jump along as it all comes crashing down around us. All things considered, there are worse ways to go out than singing PUP at the top of your lungs. —Elise Soutar

Father John Misty: Chloe and The Next 20th Century

It’s one thing when an artist like Father John Misty, aka singer/songwriter Josh Tillman, is a source of constant chatter—it’s another when they go quiet. Tillman has made himself scarce in the years since 2018’s God’s Favorite Customer, and is remaining that way in the lead-up to his fifth album as FJM, Chloe and The Next 20th Century. But the music itself has plenty to say, as ever: Singles “Funny Girl,” “Q4” and “Goodbye, Mr. Blue” are sprawling and ornate, like novellas set to instrumentation that spans FJM’s many styles, widescreen baroque pop that folds in both Old Hollywood and Americana. After the painfully personal God’s Favorite Customer, there’s a distinct comfort in Tillman’s return to spinning detailed fictions at scale—and, as ever, spotting the truths wrapped up in it all is just part of the fun. —Scott Russell

Chris Adams, known best under his musical moniker PENDANT, is on a never-ending journey through grief. Ever since the passing of his father over a decade ago, Adams has sought healing through his music. 2020 saw his stellar debut Through a Coil define his sound as a dizzying blend of pop and shoegaze, but the touring cycle was taxing on both his psyche and voice. Harp, although a sophomore release, feels like a reintroduction to Adams’ brilliant artistry. He turns a new page to explore his ‘90s house and rave influences, melded with the fuzzy shoegaze and punk in which he is rooted. As he recalibrates himself with such a stylistic departure, Adams uncovers life’s anxieties and the weight of grief to heal himself in more ways than one. —Jade Gomez

Renata Zeiguer: Picnic in the Dark

As soon as the first verse and chorus of Picnic in the Dark’s opener “Sunset Boulevard” come to a close, Renata Zeiguer has already built a dark, cavernous dreamscape of her own design around you. Even as shadows creep into every edge of the vision, there’s an ethereal warmth to the whole affair that draws you in to walk the wobbly, haunted path with her. Pulling from a broad list of influences including ‘60s bossa nova, Broadcast, Cindy Lee and David Lynch (definitely a body of work you want to borrow from if you’re doing “shadowy dream logic”), the tracks released from Zeiguer’s sophomore effort so far weave an all-encompassing vision of whimsy and old ghosts clashing, like the subconscious and key memories are untangling themselves in search of clarity moving forward. The fairy-tale trip she takes you on pulls its share of sounds from the past, but also sounds like it’s rooted in the distant future, balancing the surreal with the personal in a way that feels fresh. It’s bound to be a weird trip, but one you’ll beg her to take you on as many times as you can move the needle back to the start. —Elise Soutar

It has been five years since The Internet’s Syd released her solo debut Fin, trading the band’s funky flourishes for darker R&B textures and slinky neo-soul on a confident, unabashedly queer album. It is finally time for Broken Hearts Club, which will be released a few weeks before the singer’s 30th birthday. There is a reinvigorated sense of passion woven throughout the album. Moody, trap-inspired tracks about success take a backseat to blissful, lovestruck soul and sunny pop melodies. Despite the album’s title, Syd sounds uninhibited and hopelessly in love. It’s almost inevitable to make the Aaliyah comparisons she has gotten throughout her career, but Broken Hearts Club scratches the nostalgic itch while also looking forward at Syd’s exciting career as one of the most special R&B/soul voices of our generation. —Jade Gomez

This probably isn’t news to any of you, but a lot of people are really excited about the Isle of Wight’s Wet Leg and their self-titled debut album, which they finished before they knew if anyone would even be interested in what they were creating. It’s not difficult to figure out why so many people fell in love upon first listen: Hester Chambers and Rhian Teasdale have a knack for depicting the reality of young adulthood in a time where everything seems hopeless (you know, on top of everything terrible about being a young adult at any time), but battling back with irreverence, a sense of humor and, most importantly, really great songs. Lines like, “I heard there’s gonna be some arty / people talking ‘bout themselves / or whatever it is that you always talk about,” or an ex’s hilarious come-on of “Baby, do you want to come home with me? / I got Buffalo ‘66 on DVD,” contain winks (or eye rolls) that let you in on the band’s original mission statement that they “wanted to have more fun than any other band.” Even as they share their fears for the future on the outro for “Too Late Now,” there are voices yelling behind them, letting any possible joy you can squeeze out of fear creep through whenever possible, even if it’s just for the three-minute duration of a Wet Leg song. —Elise Soutar

Hatchie: Giving The World Away

Giving The World Away is Aussie pop singer/songwriter Harriette Pilbeam’s second full-length as Hatchie, but if it’s your first as a listener, that works out well: “This album really just feels like the beginning to me, and scratching the surface,” Pilbeam explains in press materials. Hitting the reset button is a bold move, given the critical adulation that Hatchie’s bright dream-pop/shoegaze melange inspired on her breakout 2018 EP Sugar & Spice and debut album Keepsake. But with the aid of producer Jorge Elbrecht (Japanese Breakfast, Sky Ferreira), her longtime collaborator Joe Agius, and Olivia Rodrigo’s right-hand man Dan Nigro, Pilbeam uses her new record to confront the fears and pressures she once compartmentalized—and to embrace the pop-stardom for which she once saw herself as ill-suited. Giving The World Away is proof that Pilbeam belongs exactly where she is, and it finds her rising to the occasion on no terms but her own. —Scott Russell

When Fontaines D.C. first announced Skinty Fia (an Irish curse meaning, roughly, “the damnation of the deer”) in January, they termed it the final piece of a “triumvirate” begun by their Mercury Prize-nominated 2019 debut Dogrel and 2020’s Grammy-nominated A Hero’s Death. The third time looks to be the charm for the London-via-Dublin quintet, with all three Skinty Fia singles so far—“Jackie Down the Line”, “I Love You” and the title track—ranking among Paste’s best songs of their respective months. Vocalist Grian Chatten, guitarists Carlos O’Connell and Conor Curley, bassist Conor Deegan III and drummer Tom Coll spend the Dan Carey-produced album exploring their Irishness and its distortion, couching this dark night of the soul in doomy, grungy rock as menacing as it is unassailably melodic. —Scott Russell

Asheville, North Carolina’s Jake Lenderman, best-known for playing guitar in Wednesday, will soon release his latest solo album as MJ Lenderman, Boat Songs. Singles like “Hangover Game,” which presents an alternate theory about Michael Jordan’s legendary “flu game,” and “You Have Bought Yourself a Boat,” in which somebody buys a boat, have us hankering for more from Lenderman, whose shaggy alt-country sound belies thoughtful, detailed and down-to-earth songwriting, through which his sense of humor also shines. There are odes to “Dan Marino” and “Six Flags” here, conjuring any Southerner’s idea of a good time. The artist says his new songs, the first he’s recorded in a professional studio, “chase fulfillment and happiness” above all else. In a time when the world feels particularly precarious, there’s arguably no better pursuit than that. —Scott Russell

Tomberlin: i don’t know who needs to hear this…

“The theme of the record,” Sarah Beth Tomberlin explained in a statement of her sophomore record i don’t know who needs to hear this…, “is to examine, hold space, make an altar for the feelings.” It’s a fitting description; there’s something reverential to the way Tomberlin observes the world around her and jars her reactions to them as if they’re holy. The three singles we have from the record already, “idkwntht,” “happy accident” and “tap,” are all unique from one another, yet each contain a distinct sincerity and eclectic sonic palette that let you know exactly who’s at the helm. By allowing sounds to ebb and flow where those feelings lead her along, there is literal space left in the arrangements, as if they’re making room to catch the extra instrumental flourishes, like the saxophone on “idkwntht” or foreboding cello on “tap” (or whatever collateral emotions fall by the wayside). More than anything, there’s a sense of wonder to whatever Tomberlin creates. When she sings about kids “singing like larks” and trees that “swing and scream and talk and breathe,” all we can do is sink into the world she creates, content to bask in that shared sense of wonder for however long she’ll have us. —Elise Soutar