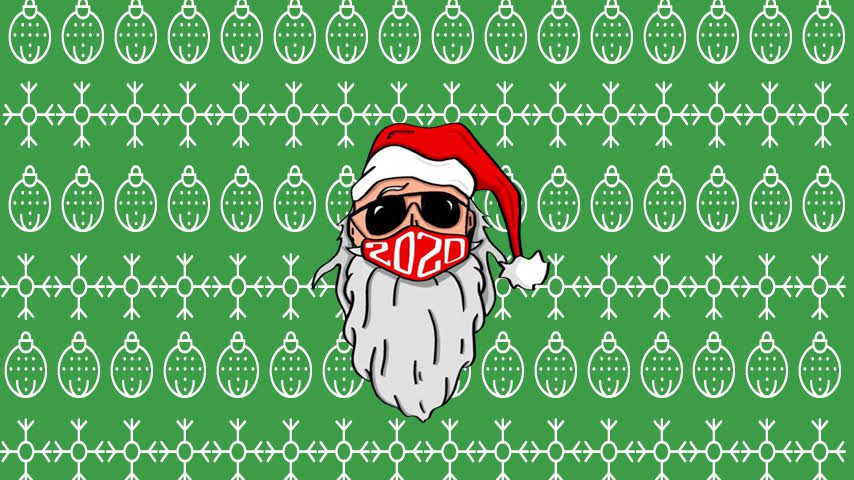 This year could use some joy, and we’re spreading it with the 2020 Paste Holiday Sampler. Once again, we’ve collected more than a dozen new wintery tunes to help you get in the spirit of celebration, whether that means Christmas, Hanukkah or just making it to the last month of the dumpster fire that is 2020. You can stream or download it on our NoiseTrade platform here: 2020 Paste Holiday Sampler.

Goo Goo Dolls: “This Is Christmas”

This is one of two original Christmas songs on the Goo Goo Dolls’ 13th album and first-ever holiday LP, It’s Christmas All Over. The Buffalo, N.Y., band has sold more than 12 million albums and will be performing the new songs as part of its ground-breaking augmented reality movie musical this month. (Photo by Tony Duran)

For Leslie Odom Jr.’s The Christmas Album, the Broadway star and recording artist wrote two original Christmas songs to go with his take on holiday classics like this one. “Man lemme tell you, we sang our hearts on this album,” he says. “We needed to. I believe you’ll hear it and feel it when you listen.” The Christmas Album has already hit #1 on the jazz charts. (Photo by Ashley Osborn)

Breakout Welsh band Buzzard Buzzard Buzzard share a little holiday satire from across the pond with their follow-up to the recent single “30,000 Megabucks” and July EP The Non-Stop. The four-piece was slated for an opening slot with Noel Gallagher at the Royal Albert Hall as well as a headline tour before Covid hit. (Photo by Rhodri Brooks)

Calexico: “Christmas All Over Again”

Calexico’s new holiday album Seasonal Shift is a cross-cultural seasonal celebration, incorporating Portuguese fado and Mexican traditionals into their Southwestern art-folk with collaborators as varied as Bombino, Gaby Moreno, Gisela João, Nick Urata of DeVotchKa and Camilo Lara. “It’s more of a seasonal album and like all seasons they are about change and how those changes in the world resonate inside of you,” says the duo’s Joey Burns. (Photo by Piper Ferguson)

Bill Mallonee: “Knocking at Your Door”

Bill Mallonee’s Vigilantes of Love were an Athens, Ga., staple in the 1990s, and he’s continued to release solo albums filled with the kind of songs that earned him a spot on Paste’s list of the 100 Greatest Living Songwriters since relocating to the American Southwest. This track is off his album of original Christmas songs, Yonder Shines the Infant Light. (Photo courtesy of the artist)

Recorded back in 2010, the Aisler Set’s holiday duet “Cold Christmas” has finally been released by Suicide Squeeze and captures the band’s love of ’60s pop sound. Founding members and co-songwriters Linton and Wyatt Cusick swap vocals on this unearthed track, which reminds us why they were indie-rock darlings before geography forced them apart in 2003. (Photo by Matt Alcock)

“The world’s on fire and I’m allowed to Cancel Christmas this year,” sings Nashville’s Jillette Johnson in a song she wrote and recorded in just 24 hours. “I miss my family and I wrote a Christmas song about it a couple weeks ago,” she says. “I recorded it in my house, and decided to just put it out because I figure a lot of people may be feeling the same way right now.” Her full-length debut It’s A Beautiful Day And I Love You is due out February 12. (Photo by Betsy Phillips)

Black Violin: “Give Thanks”

Black Violin operate in their rarified space where classical meets hip hop. The duo of Kev Marcus and Wil Baptiste have been wowing audiences since they were high-school friends playing violin and viola in Ft. Lauderdale, Fla. From handling string arrangements for hip-hop stars to releasing their own music, they’ve challenged perceptions of both hip hop and classical music, empowering young musicians and getting a Grammy nomination along the way. Their first holiday album Give Thanks is out now. (Photo by Albert Manduca)

Kansas City natives Nathan and Becky Bliss have released an aptly named holiday album for 2020, Bleak Midwinter, but the messages of the 11 tracks are more hopeful than the title suggests, unsurprising coming from a holiday music fan like Becky: “I pretty much start listening to Christmas music at 12:01 AM on November 1. For me, the season goes way too quickly, so I like to milk it for all it’s worth!” (Photo courtesy of the artist)

Cameron DuBois: “Merry Christmas, Wherever You Are”

Alabama country artist Cameron DuBois teamed up with songwriters Rick Hansen and Bill Hinds for her first holiday track. “Writing and recording this song with Rick Hansen and Bill Hinds makes it even more special to me as we have been doing a lot of writing together in 2020. This will be my very first single released that we have written and recorded together as Cameron DuBois & Bama Sound. So, Merry Christmas, Wherever You Are!” (Photo by Danielle Shields)

This year needs more feel-good stories like this debut single from Philadelphia 15-year-old Wallis. The video was recorded on her dad’s iPhone and is quickly approaching 100,000 views on YouTube after getting attention on Reddit. With backing vocals from her younger sisters Maren (13) and Soleil (10), it captures the complexities of celebrating in 2020. (Photo courtesy of the artist)

Acoustic guitar virtuoso Tommy Emmanuel is no stranger to Christmas albums, as Live! Christmas Time marks his third such release. Recorded live at the Sierra Nevada Brewery in Chico, Calif., the fingerstyle guitarist and vocalist was backed by Annie Sellick, John Knowles and Pat Bergeson. “Christmas music is so joyous to me,” he says, “and I feel we rose to the occasion that night.” (Photo by Alysse Gafkjen)

Since launching his career in 1989, Atlanta/Nashville artist Kevin Lawson has traveled the globe performing as a solo artist and with bands 3 Lost Souls, Supermatic and Dixie Horsepower, won ASCAP Songwriter of the Year, and released nine albums. His 10th, Now Is Perfect is due out early next year. (Photo courtesy of the artist)

Happy holidays from the Paste staff! May your days be merry and bright.