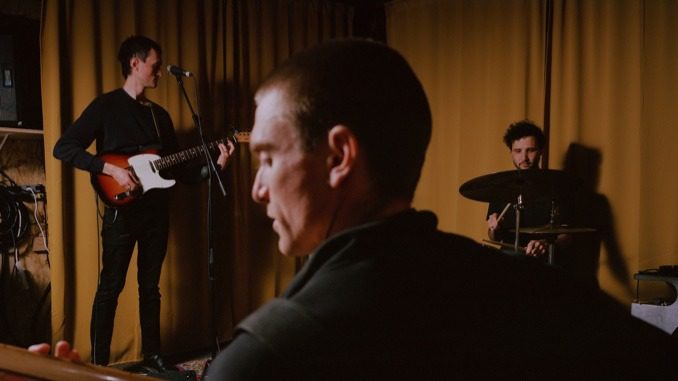 How long does a well-liked band need to carry on before they have unequivocally made their point as an artistic entity? Once a band name is retired, can any of its members really start fresh without it?

This Friday, Tim Darcy and Ben Stidworthy of the great Montreal-based band Ought will be releasing a fantastic album called Deep In View with their freshly minted band Cola. It’s an intensely intimate and human post-punk record—with Darcy singing and playing guitar, Stidworthy on bass, their friend Evan Cartwright on drums, and little getting in the way of the feeling of them playing in a room together all at once. But what is perhaps the most interesting thing about these three friends coming together for this project full of promise, is what Darcy and Stidworthy will be leaving behind in the process.

The first time the world was introduced to Cola back in November of 2021, it was coupled with the announcement that both Darcy and Stidworthy would no longer continue making music with Ought. It was a real “dose of sugar, dose of vinegar” scenario for fans. “We are no longer active as a band,” the band stated, adding, “When we started Ought in 2012 we had no greater aspiration than to play and write music together, and the fact that we were able to tour the world to such an extent and share so many rooms with so many of you has meant the world to us. We send lots of gratitude and love to all those we met and worked with along the way.” After this heartfelt goodbye, the band made mention of a new Cola single and that was that. Say hello to Cola. Wave goodbye to Ought.

In their time together, Ought left behind a rewarding discography, with three full-length albums and one EP. Their debut album More Than Any Other Day was a breath of fresh air upon its release in 2014, sounding in equal measures like Television at their most streamlined and the menacing stomps of the underrated D.C. post-hardcore band Lungfish. With the albums that followed—2015’s Sun Coming Down and 2018’s Room Inside The World—they found ways to refocus their attack while playing against any expectations along the way.

Even though the end of Ought and the announcement of Cola was whiplash-inducing amongst fans, Darcy explains that the decision had been made all the way back in 2018. The plan was to fulfill two major back-to-back tours—one in Europe and the other across North America. Once all of their obligations were off the table, Ought would shake hands and raise a glass to their celebrated body of work before parting ways. Merge Records, their label at the time, advised them to not announce anything publicly. They thought that, perhaps, the guys in the band’s feelings might not be so finite after banging out some of the oldies on the road. But once Darcy and Stidworthy started assembling what would become Deep In View with Cartwright, they had to come to terms with the fact that Ought was no more.

“I think they were hoping that it wasn’t true,” says Darcy of the label’s plea for them to step off the ledge. “Then, because we didn’t have anything public to say until Cola made this record, it came to the point where we were like, ‘Okay, well now, we have to say something.’ Maybe that’s unfair to fans or whatever. But everyone in Ought has so much love for fans of that band. It wasn’t out of any kind of neglect. It’s our style as people, to be old school about it.”

Considering how it all played out, Stidworthy chimes in with a measured response, ultimately agreeing with Darcy. “I guess from the outside, it looks different,” he says.

“I didn’t want to announce anything for exactly the reasons that Tim was saying,” Stidworthy recalls. “There was a year before Tim and I even really talked about making music together. It did come to this moment where when we were announcing Cola as a project— which in our minds, had been in existence for like a year and a half—we really needed to do this so that there was clarity. Which even I, at that point, was really reluctant to do, but we realized that it was necessary. Even though it really makes sense, at the time, I didn’t really understand how clear[ly] the lineage and link would be made. People can’t mention Cola without Ought, which makes sense. But in my mind, it wasn’t going to be like that. Or at least so explicitly […] to the extent that people were like, ‘Why did they change the name?’ We didn’t change the name. We’re missing two people and have one new person. It’s a totally different thing. But here we are.”

When talking about the differences between Ought and Cola, it shouldn’t be overstated how much both keyboardist Matt May and drummer Tim Keen brought to that band’s specific brand of knotty post-punk. In turn, Cartwright’s personality behind the kit in Cola is hard to downplay when listening to Deep In View. The band had initially met Cartwright when he was drumming in the Toronto experimental group Tasseomancy, and had later connected with him on the road as a member of U.S. Girls and The Weather Station. Darcy would later tap Cartwright to play drums for a two-week U.S. tour behind his 2017 solo album Saturday Night, so getting him to join this project was a natural choice. “Right away, there was great chemistry,” says Cartwright about the creative energy around Cola. “We just sort of knew what each other were going to do.”

There is an overwhelming sense of directness in both purpose and delivery on Cola’s debut. In our conversation, the members bring up the fact of how easy it was to build these songs or chase down early impulses together in a simple three-piece configuration. While Ought only had one more member in their lineup, the figurative weight behind the well-established group was something that couldn’t be avoided. Darcy explains that the band had moved on from being the creatively democratic, guitar-driven band that was introduced to the world on their adored debut More Than Any Other Day, to taking on the guise of a project where he felt increasingly more like “the frontperson” who was “also playing guitar.” The thought of pouring all of his artistic energy into a new band with no sense of hierarchy was exciting for Darcy. Writing for a project that didn’t necessarily have the history of Ought—or have his own name chiseled front and center—allowed him and the rest of the band to reintroduce themselves on equal footing. According to Darcy, that pressure was the cause of both Ought’s ending and “Cola’s incarnation.”

“I’ve always really admired and valued people who have careers that are uncompromising and really varied. People who follow the muse,” Darcy explains. “Whether it was spoken as we went into the writing process for this record, that was something that I think Ben and I were really clear about. We wanted it to have this air of freedom and we didn’t set any expectations for ourselves. Coming out of a really intense touring band, which was increasingly being mediated through lots of other things and other people, that was a really positive place to write from.”

Darcy’s songwriting and performances complement each other in the right ways, creating tension where it is needed and leaving arrangements uncluttered when the focus should be on the words. Darcy’s strength as a lyricist has always been a considerable strong suit in all of his projects, as he is routinely able to drag out evils in a society that constantly tries to mask them. A prime example of this is the album’s jazzy closer, “Landers.” In the song, Darcy delivers a spoken-word narrative in which he depicts two characters drinking soda. He explains the soft drink as a substance that is “bound by laws older than man to poison most ordinary life on earth.” If that lyric could be taken as the basis behind the band’s name, it would be a fitting encapsulation of the society obsessed with manufacturing comfort from which Darcy seems to take inspiration.

“I think there’s a throughline of playfully identifying these sort of things that come up in life that have this emptiness to them and yet have an enormous place in our day-to-day lives,” he explains. “The way that I write lyrics, they come up very automatically and then I go back and finesse them. I try to always present things in this way where there’s almost a wink with it that allows someone to feel both like there’s an opportunity to consider something in a new way while also there’s ideally a degree of lightness. It’d be silly to mount a takedown of something like soda, or something like that. It’s a rock song! But it’s just presented as an aside, something to consider.”

While this fresh start is exciting for the members of Cola, it’s not like the recorded output of Darcy and Stidworthy’s most famous project is decades behind them—Ought’s final album Room Inside The World came out in 2018. Many artists would still consider those songs fresh material, given the time in between releases. But the thought of integrating Ought favorites that they recorded with May and Keen is out of the question for Darcy and Stidworthy, as the four members talk regularly and are still on good terms. “I think some of the Ought songs without them would not feel good,” clarifies Stidworthy. “So I don’t think it was ever on the table, just as a principle.”

Darcy agrees, noting that Ought worked in a very similar way to how Cola is now. The band never entered their practice space with prewritten material and thrived on creating spontaneous moments of greatness out of “gargantuan jams.” Trying to replicate that magic on the road with only half of the band onstage wouldn’t do their legacy any justice. “It really feels like that band is those exact four people,” he says. “It exists very specifically because of that DNA.”

These days, Darcy is mostly preoccupied thinking about the music Cola have in store after they have toured behind Deep In View. “We’re just very excited about doing more writing. We already have a new batch of songs that we’re working on. We’re pretty excited about working on another Cola record, within the next year.”

Geographically, the band is scattered in different places at the moment. Stidworthy is based in Toronto and Cartwright is in New York. Darcy is mostly based in Toronto and when we spoke, he was calling from an alleyway, waiting to load onto a tour bus as a guitar tech for a string of dates with Snail Mail. When asked about preparing for their tour, a look of excitement comes over Stidworthy’s face as he explains that the band is looking forward to not only getting out on the road, but also working on that new Cola material.

“We’re gonna meet up in June in Montreal and do a big writing and rehearsing session,” he says with a grin on his face. “We are absolutely so excited to get on the road. It’s all I can think about and everything just kind of feels like a large preparation for that right now.”