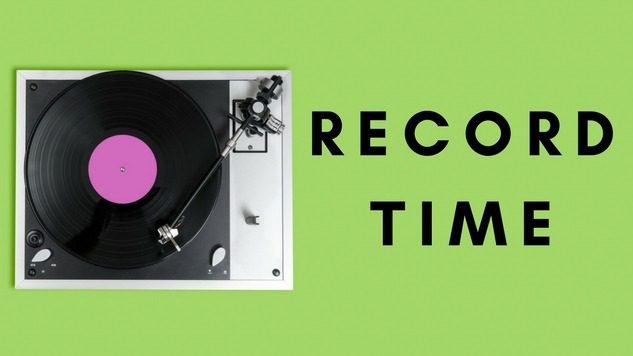 Record Time is Paste’s monthly column that takes a glimpse into the wide array of new vinyl releases that are currently flooding record stores around the world. Rather than run down every fresh bit of wax in the marketplace, we’ll home in on special editions, reissues and unusual titles that come across our desk with an interest in discussing both the music and how it is pressed and presented. This month’s edition includes some audiophile-minded jazz reissues, a collection of folk-punk classics and a variety of new sounds from around the world.

The existence of the third new album from The Chills in six years feels like a quiet miracle. Band leader Martin Phillipps has been through a few circles of hell, owing to drug issues and a Hepatitis C diagnosis. Back on solid ground, he’s writing perhaps his best work yet, and, on the recently released Scatterbrain, using his lyrics to take stock of the years he has left. The fog of mortality hangs over each song, but it never feels enveloping or blinding. Even when the music becomes downcast, Phillipps’ viewpoint is one of quiet acceptance of his eventual date with the unknown. The highlights of the album arrive when he applies those lyrics to upbeat and punchy tunes, like the swirling “Worlds Within Worlds” and the triumphal closer “Walls Beyond Abandon.” It brings a delightful dissonance to the work that calls back to The Chills’ amazing ’80s run. Phillipps may be thinking about life’s end, but it’s work like Scatterbrain that will make him immortal.

The Gil Evans Orchestra: Out of the Cool/Ray Charles: Genius + Soul = Jazz (Impulse/Verve/UMe)

After spending much of last year giving fresh life to titles from Verve’s catalog, audio company Acoustic Sounds turns its attention to another great jazz label. Through the rest of 2021, UMe will re-release some gems from Impulse Records’ 60-year history, using the original master tapes and paying meticulous attention to the music. The first reissues in this series—The Gil Evans Orchestra’s Out of the Cool and Ray Charles’ Genius Soul = Jazz—were part of the first four albums Impulse released back in 1961 and set the template for the next six decades of the label’s output. The music on both albums was already lush and exciting, applying a big band brashness to cool jazz and gritty blues. These remasters amplify those qualities to a sometimes overwhelming degree. Listening to Genius Soul was near exhausting as every last detail is brought to the surface. The nasty tone of Charles’ electric organ. Freddy Green’s steadily bouncing guitar. Every individual brass and woodwind instrument. Every player is right there, jockeying for your attention. Evans’ album is less staggering but that’s only because the music cushions rather than cajoles. The five compositions, and Evans’ arrangements of them, are as crisp as a well-tailored suit and have the devilish allure of a gangster’s moll in a film noir classic.

Super Furry Animals leader Gruff Rhys wrote his latest, and arguably his best, solo album thinking on a macro scale. Using Mount Paektu, an active volcano in North Korea, as his guide, he crafted a suite of songs wrestling with the human race’s tiny place on both the planet we call home and within the universe as a whole. I’ll give you a minute to recover from the existential shudder that idea may have set off within you. And when you do, encourage you to track down a copy of this marvelous album. Rhys and his backing band, including former Flaming Lips member Kliph Scurlock on drums and the secret star of this show Steve Black on bass guitar, fearlessly dance on the lip of this particular volcano with bouncy tunes that roll and churn like the members of Argent covering The Zombies’ Odessey & Oracle. For Rhys’s part, he sounds like he’s been listening to the ancient myths surrounding this peak and finding within them deep connections to our modern biases and desires. All of us, in our small and large ways, are seeing some kind of explanation for how we got here and what comes next after we breathe our last. Rhys makes that search feel exciting and downright hopeful.

There’s a charming amount of preemptive legend-making in this reissue of a raw demo New Orleans recorded by electro-punk group Special Interest. Tucked into the sleeve of this album is a zine-style booklet featuring photos and show poster reproductions. It’s as if the career of some nearly forgotten post-punk artist was getting revived rather than a band that is still a going concern. It’s befitting the throwback quality of Special Interest’s music. Led by the electronics and drum machine of Ruth Mascelli and the sheets of guitar noise generated by Maria Elena, this quartet makes a danceable racket in the mode of Suicide or a narcotized Le Shok. Standing in the center of this maelstrom is vocalist Alli Logout, who treats each song with a cool indifference that is equal parts seductive and creepy. The group would flesh out some of this material for their 2018 debut Spiraling, but I prefer these early, barely formed blurts in all their ugly, assaultive glory. Your mileage may vary.

Congolese collective Kasai Allstars has a simple, powerful edict: Unity Is Strength. The members of this group all belong to different ethnic groups that have discrete languages, both spoken and musical. They found a common cause in creating modern sounds that pull from their varied approaches—thumb pianos and hand drums joining forces with electronic beats and wandering melodies played on electric guitar and synthesizer. But it’s the blending of their distinct dialects that makes this music so gripping. They stay true to the voice of their individual tribes while singing about the challenging conditions that face every citizen of the DRC and, as explained in the liner notes, staying “united for the sake of our common interest.” Arriving at a time when our world feels more divided than ever, this album is a beacon.

In 1960, Abbey Lincoln was given a major platform for her vocal talents on Max Roach’s daring political jazz album We Insist!. It opened the doors to collaborations with Eric Dolphy and Cedar Walton, as well as acting gigs for TV and film. That work has often overshadowed Lincoln’s earlier efforts, like this wonderful collection recorded for Riverside in 1959. The music is delicate and restrained. The musicians—Stanley Turrentine, Julian Priester and Philly Joe Jones, among them—sneak into the picture cautiously, not daring to pull focus from Lincoln’s cooly powerful vocals. She exerts no effort and avoids all flights of musical fancy. Lincoln states her case plainly and beautifully. And this new edition, remastered by the great Kevin Gray at Cohearant Audio, feels as rich and indulgent as a lava cake.

If you’re unfamiliar with these L.A. rockers, all you need to know is right there in the album art. The cover star is a gal in fishnet stockings, whisky in hand, surveying the options on a jukebox: The Jam, Danzig, a classic punk comp, and, of course, a Streetwalkin’ Cheetahs album. The album insert features a picture of the five Cheetahs, sidled up to a bar in Long Beach, CA, looking like they’ve been around the block a time or six. Throw in their Stooges-inspired name, and even before the tone arm has dropped, you’ll be ready to absorb the full force of the crackling glam-punk cut into the grooves. The album is sequenced like a great live show with the right peaks and valleys to keep the listener attentive and buzzing without pushing them too far over the top or bringing them low. I’m buzzing at the mere thought of being in a sweaty crowd, pumping my fist and spilling my beer while this band cranks out the power pop gem “We Are The Ones” or the neck-snapping “The Rejected” or the grinding title track (which here features a guest turn from Dramarama vocalist John Easdale),