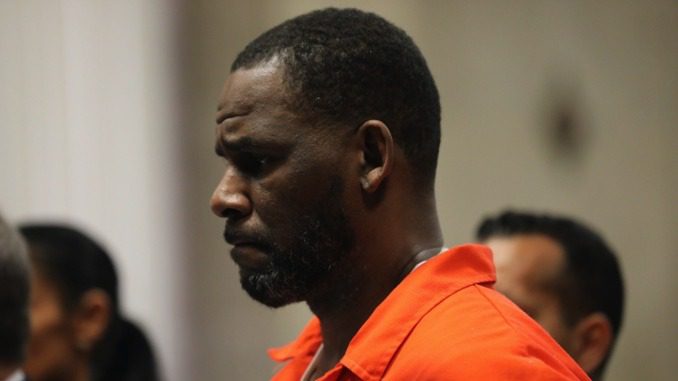 The six-week criminal trial of the artist known as R. Kelly has ended in a landmark ruling. A Brooklyn federal court found Robert Sylvester Kelly guilty of racketeering and eight violations of an anti-interstate sex trafficking law known as the Mann Act on Monday.

The anonymous, 12-member jury had begun their deliberations on Friday (Sept. 24) afternoon and reached their verdict after nine hours of discussion. Their decision punctuates decades of sexual abuse allegations against Kelly.

Kelly now faces decades, if not life, in prison—he is scheduled to be sentenced on May 4.

While the verdict was read, Kelly “sat motionless in the courtroom, wearing a navy blue suit and glasses, [with] his facial expression hidden behind a mask,” according to the N.Y. Times.

Typically associated with organized crime schemes, “racketeering” here encompasses 14 distinct acts, including bribery, kidnapping, forced labor and Mann Act violations. Prosecutors successfully argued that Kelly and his associates engaged in a decades-long coordinated effort to prey on girls and young women. The other Mann Act violations of which Kelly was found guilty, considered as eight separate counts, involved the transportation and coercion of two women, one of whom was a minor. The racketeering count carries a sentence of up to 20 years; each Mann Act count carries up to 10, for a total of 80.

Kelly, 54, is still facing criminal charges in Illinois and Minnesota.

Nine women and two men who accused Kelly of predatory behavior testified against him, as did eight of the artist’s former employees. Prosecutors presented evidence dating back as far as 1991, a sobering reminder of just how long Kelly’s actions were enabled or ignored. The #MuteRKelly movement, 2019 docuseries Surviving R. Kelly and—most of all—the immeasurable bravery of Kelly’s accusers all paved the way for today’s verdict.

Kelly attorney Deveraux L. Cannick told the Times, “Of course we are disappointed in the verdict,” calling the prosecution’s case “replete with inconsistencies,” and adding that Kelly would consider appealing.

“To the victims in this case, your voices were heard and justice was finally served,” said Acting U.S. Attorney Jacquelyn Kasulis, per the AP.