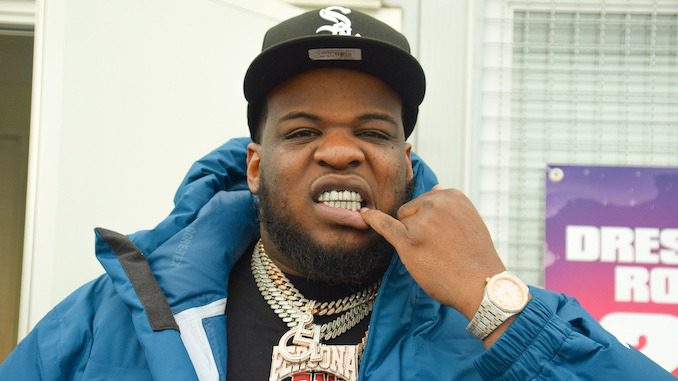 Much of the press surrounding Maxo Kream focuses on the obvious: his intense stare, imposing figure and bleak storytelling in the same vein as his hometown predecessor Scarface. All roads lead back to fear, and the endless expanse of his dark pupils could certainly instill a hefty dose into the right person. For those more familiar with the Texas rapper’s work, there is also a playfulness present that others would dismiss. For one, his eyes light up as his massive hands grab the scruff of his tiny French bulldog, pointing the dog’s wandering eyes towards mine through our video call. Another one pops into frame atop the couch, dwarfing itself further when next to the rappers’s waist. “Their names are Biscotti and Balenciaga,” he tells me with a smile.

The last time I saw Maxo Kream on a couch was in a vlog with his girlfriend Kennedy Rae. The two matched in all black ensembles as they answered questions about their lives as a couple. At one point, he picked something out of her hair. I decide now is the perfect time to ask him about sharing that rare, candid video as his puppies scatter out of the room.

“It was a vibe for sho’, just a side people don’t get to see,” he says with an even larger grin. “But don’t get it twisted. Don’t play with me. Don’t think I’m so sweet. I’ll still have my foot so far up somebody ass, they’d be sucking my toes.”

This must be the Maxo Kream everyone else was talking about.

The rapper born Emekwanem Ogugua Biosah Jr. to a Nigerian father and American mother recently released his third studio album Weight of the World. As is the twisted fate of the world, with Biosah’s meteoric rise came the arduous wait for the other shoe to drop. His younger brother Money Mmadu was murdered in Los Angeles in March of 2020, only days before the world shut down and a few months after he welcomed Biosah’s niece into the world. His father, Biosah Sr., went back to jail. Another one of his friends is facing murder charges. His cousin died by suicide months after they buried Mmadu. Perhaps one of the most heartbreaking of all is his beloved grandmother falling into a coma. As Biosah reflects on these things one after the other on Weight of the World’s opening track “CRIPSTIAN,” it becomes clear what drives his music: survival.

By this point, it hit me why coverage of Biosah as a terrifying figure was so bothersome. It spoke to the parallels of how young Black men are portrayed in the media, most notably when Michael Brown, an unarmed Black teenager who was killed by Ferguson, Missouri police, was referred to as “no angel” by the New York Times.

“That’s a real crucial time. Being a young Black man, 17 through 21 in America, whether you’re in the hood or the suburbs—if you fuck up and do something wrong? It’s harder for a Black man. A mistake you made back then could fuck you over forever.”

Biosah’s vivid storytelling throughout his music should be taken as cautionary tales, a lesson he is still learning every day. He channels the paranoia and distrust he has for the world around him, a symptom of gang life, as he sees people such as fellow Crip Nipsey Hussle being killed by a fellow member. Where all of Biosah’s previous releases provided firsthand accounts of the darkest things he has encountered and committed, Weight of the World is the creeping guilt that slithers its way into bed with you before you shut your eyes, or the sudden pang of regret when you’re all alone. It’s also about change.

One of the most obvious signals towards change is on “LOCAL JOKER,” where Biosah reflects on the trauma and lessons he learned from his life growing up in the midst of violence and crime. “Before I played freeze tag, I played kick door / Before I heard the word ‘romance,’ I heard the word ‘hoe.’” The clanky drums lay down a lush blanket and muffled R&B horns echo as his hypnotic flow coasts through tough topics, such as the paranoia of seeing black Suburbans driving behind him and the ease with which he could kill someone over a pair of shoes in his formative years.

Biosah’s body language changes as he shifts in the couch, eyeing those in the room with him.

“I broke the family cycle, like getting a legal job. Really making money and paying taxes type shit.”

Despite breaking away from many of the cycles that nearly cost him his life and career, Biosah still finds ways to reminisce on and pay homage to what nevertheless formed him. He is still deeply entangled in the pride he has for Texas. By a twist of divine fate, he even signed a management deal with Roc Nation on June 27, 2019, also known as DJ Screw Day in Houston. Looking past his undeniable accent that is still prominent in his rapping, Biosah also drops subtle references to his home, like “Country ass n***a, country like LeAnn Rimes” on the chorus of “11:59,” a lyric taken from Lil Wayne’s verse on “9MM” by David Banner. “MAMA’S PURSE” morphs from a twinkling lullaby into a memory of stealing from his mother’s handbags, opening with the iconic Three 6 Mafia line, “Ever since I could remember, I’ve been poppin’ my collar.”

Biosah nonetheless has love for artists from every corner of the country, noting that he still cherishes the A$AP Yams cosign he received in 2012. He also speaks fondly of Odd Future, referred to as “atheist ass shit” by his friends. When I ask if he has any unlikely influences, he even mentions Limp Bizkit’s Fred Durst.

I was also taken aback by Biosah’s deep Christian beliefs, a trait he is quick to point out the hypocrisy of himself. “I’m a Christian, but with this crippin’ it feels like a contradiction,” he tells me. He never fought in church, however, quick to point out to his brother that fighting would make their mother look bad.

“If you’re a gangbanger, you’re not supposed to idolize anything else. At the same time, most of the killers from the hood would catch a body and pray to God.”

Biosah’s eyes get a bit softer and he looks into the camera.

However, most of the roads Biosah takes me on eventually lead back to his brother or his father. Biosah Sr. has been a constant feature of most of his albums, mainly by reference. Biosah often reflects on his father’s constant hustling upon immigrating to America from Nigeria to provide for his family, interlocking his father’s past with his present. This is most apparent on his sophomore album Brandon Banks, which is an homage to Biosah Sr.’s impact on his life. However, the perfect portrait is painted on “Work,” the opening track off his debut studio album Punken, which starts with:

Christened with his father’s name to carry onward, the masculine compulsion to provide for the family is a quiet theme throughout much of Biosah’s work, realized even more on Weight of the World. First expressed in “Bissonnet” off Brandon Banks, he says, “I have my pops inside my life, but right now that shit don’t matter / He’d been locked up most my life, so I feel just like a bastard.” It’s a trait carried on from patriarchal households to the tightknit community found in gang life to Biosah’s new role as a father himself. Biosah has a new purpose.

Only two weeks prior to our conversation, he welcomed his daughter, Kenzie, with Rae. It’s a bittersweet moment, underscored by the burial of his brother, which still sits fresh in his mind. Biosah even pushed the album’s release to Oct. 18 as a way to commemorate both his niece’s birthday and the date of the first show Mmadu missed, previously having perfect attendance at every one of Biosah’s live shows. With a daughter of his own, Biosah has had to step up in a new way for his family as a provider.

“I’ve been on my leadership shit,” Biosah tells me with pride. A smile creeps onto his face again. “I’m getting to find out her emotions, because babies have the same emotions from a baby to an adult.”

I ask how his mother described him as a baby, to which he replies, “Moody, grouchy. Bad as hell.”

The Biosah sitting in front of me has seemed to outgrow all those emotions, armed with the resources offered to help him succeed and support others. This is the Maxo Kream I know. Weight of the World is his proper introduction.