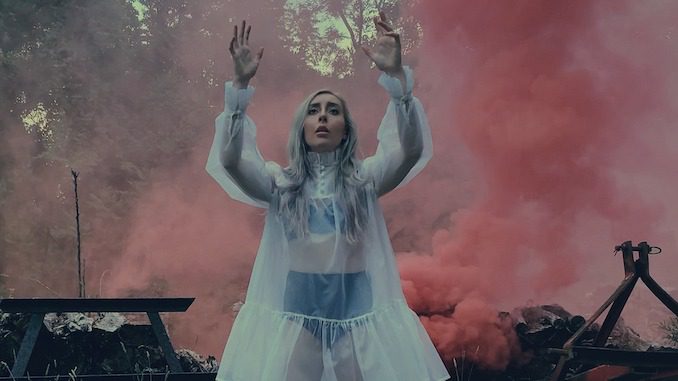 Classically trained multi-instrumentalist and performance artist Kristen Hayter, best known as Lingua Ignota, has announced her forthcoming album SINNER GET READY, out Aug. 6 via Sargent House. The album, which marks Hayter’s debut on the label, comes after her acclaimed 2019 album CALIGULA that introduced a wider audience to her captivating and intense lyricism that blends classical music with metal.

With the announcement of SINNER GET READY comes the album’s first single “PENNSYLVANIA FURNACE.” Compared to the brutality of CALIGULA, “PENNSYLVANIA FURNACE” is delicate, with Hayter forgoing her cathartic shrieks in favor of a gentler operatic delivery. The track calls upon Hayter’s fascination with religious iconography and the unrelenting nature of God’s judgement, as inspired by the legend of an 18th-century iron master whose dogs return to drag him down to hell after he throws them into his furnace in a rage. Hayter self-directed, edited and filmed the accompanying visual, set in the dense landscape of rural Pennsylvania that she inhabited during the album’s recording process.

Watch the video for “PENNSYLVANIA FURNACE” below and scroll further down for album artwork and track details. You can preorder SINNER GET READY here.

01. THE ORDER OF SPIRITUAL VIRGINS
02. I WHO BEND THE TALL GRASSES
03. MANY HANDS
04. PENNSYLVANIA FURNACE
05. REPENT NOW CONFESS NOW
06. THE SACRED LINAMENT OF JUDGMENT
07. PERPETUAL FLAME OF CENTRALIA
08. MAN IS LIKE A SPRING FLOWER
09. THE SOLITARY BRETHREN OF EPHRATA