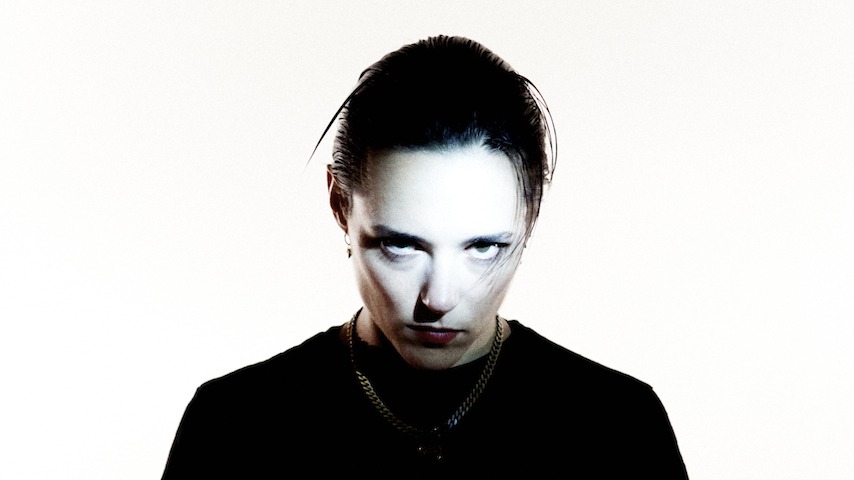 The first time many became acquainted with Jehnny Beth was on “Shut Up,” track one of Savages’ 2013 debut album Silence Yourself. Beth proclaimed herself “a breaker of ocean, leaden like a bullet to the sun,” a line of melodramatic bravado which might not have landed if it wasn’t for her gripping intensity. The U.K.-based post-punk band shook listeners with their unflinching strength and serious devotion to artistry, and their two studio albums still hold up as all-time-great punk highlights of the 2010s.

Beth doesn’t have to beg for attention—you’ll hand it over as if you had no choice in the matter. Beth’s performances are known for her alluring and physical display, and after Savages went on hiatus in 2017, it was hard to believe her ferocious grace would be sidelined for very long.

Beth was raised in France and later relocated to London to start a band, as she felt more connected to the music scene there. After finding success with Savages and living there for over a decade, she decided it was time for a change, so she moved to Paris and soon began working on new material, which would end up on her debut solo album To Love Is To Live, out this Friday (June 12) via Caroline Records. It’s her most musically daring and lyrically vulnerable work to date—while Savages invoked a godlike power and operated within the parameters of late ’70s and early ’80s punk, Beth tears down both her strong facade and stylistic barriers. Alongside electro-punk, industrial and classic pop sounds, Beth deconstructs her ego, explores her desires and tries to make sense of humanity, which she feels deeply disconnected from. The album features songwriting contributions from The xx’s Romy Madley Croft, plus a spoken-word passage read by Peaky Blinders actor Cillian Murphy (“A Place Above”) and a verse from IDLES’ Joe Talbot (“How Could You”).

Beth is currently confined at home in Paris with her partner and frequent collaborator Johnny Hostile, who also recorded with Beth as John & Jehn for two albums before Savages formed. She’s been filling her time with a lot of physical exercise—mostly boxing, a hobby she picked up in L.A.—and she’s also been enjoying the lengthy, new instrumental releases from Nine Inch Nails. Aside from her music, she’s just released a collection of erotic short stories titled C.A.L.M. (Crimes Against Love Manifesto), and she currently hosts two shows: a Beats 1 radio program called “Start Making Sense” and a music TV series called Echoes with Jehnny Beth, which airs in France and Germany and is also available on YouTube.

Read Paste’s Q&A with Beth about the making of her new album To Love Is To Live. This interview has been edited for clarity and length.


Paste: For this album, you worked with Johnny Hostile (who you’ve worked with many times before), plus Flood and Atticus Ross. What was that dynamic like?

Beth: I started working with Johnny Hostile on lyrics I had written and ideas I had on the piano, and we did a lot of work and research. There would be days where we would do five or six versions of the same song. That was very useful because then we found a lot of sounds that we loved that way and that we kept in the final version. Some of the songs at that stage were kept that way, but some songs we thought needed more input. And so the first person I asked was Atticus Ross. I’d met him before. I’ve visited him in L.A. in the studio before, and he was a fan and he was someone I always felt was very sharp in his tastes in music.

I was a fan of his work with Trent Reznor, especially all the film soundtracks. Also, the Nine Inch Nails records, obviously—they don’t decrease in quality at all. So I was interested in that and then we spent a lot of time talking first. I was in Paris. He was in L.A. So we would write letters and talk to each other on the phone a lot. After a few months, me and Johnny Hostile moved to L.A. for a few months and we worked there in the studio. Atticus would come to the studio at night, after sessions with Trent. And he still hadn’t done any music, but we were talking a lot. I think he wanted to know exactly what I had in mind and to get to know each other and talk about different music. Then maybe a few months later, he started working on “I Am,” and he nailed it straight away because we had spoken a lot about it. He took it to another realm and I felt, “Oh, okay.” I realized it was going to be another year of work after that because of what he had done and what we needed to continue doing and pursuing with him. But he went on tour with Nine Inch Nails and so, we carried on working. We produced, in the end, three tracks for the record. And during that time, I also met with Flood.

[Flood] was introduced to me by PJ Harvey who suggested him, and I wasn’t sure at first. I was a bit stressed as well. I wasn’t sure what he wanted to do. We worked for a few days together in his studio in West London, Assault and Battery, and Flood is really a master in terms of the old school producer’s sense of the word—you know, the guy who sits at the back on the sofa and tells everybody what to do. I had never worked with a producer that way before. Basically, he was the last producer to work on the record, and he helped me to bring all the record back to myself because after working with different people all around the world for a long time, the risk is to lose ownership of the record, so you have to gather it all back and that was really helpful. But I think what he’s the master at in the studio is to bring chaos and create an environment where accidents can happen.

As you’d done with Savages, Johnny projected films on a screen as you were working in the studio. What do you get out of that?

We did that at the beginning when we worked in a studio in Paris because…I think the main reason is because the studio doesn’t have a window. So when you work on music, it’s nice to have chatter and somewhere your gaze can get lost into. Because we don’t have a window, we can’t really do that. So we screened films, which provides a window, in a way, where you’re working and you raise your head and suddenly you see an image and it gives you instantly an emotion and it can be an influence on the music you’re creating at that point.

You co-wrote a few tracks with Romy from The xx. Did you find that you wrote in similar ways?

There were similarities, but also she comes from a very different world from me. The first time she came to talk to me was at Coachella, and I had no idea she was a fan, but she gave me her number and we started talking and we became friends and met again. One of the first things she told me when I was telling her about doing this record is—she said, “If you’re doing your personal record, it’d be great to see a side of you that I know because I’m your friend, but I don’t see in Savages.” I think her influence has been to try to help me be more vulnerable, in terms of lyrics, but also in terms of delivery and the contrasts you hear on the record. It’s something that I want to have—some sort of energy, even violent moments and then contrast them with stark simplicity. But sometimes I would find resistance, even though I wanted that. So my idea was to try and get influenced by other people and try to let them into my process. That was something I wanted very much for this record because I thought that, at least for a while, it would help me to get another kind of experience. It’s the same when you start a band and then you have an influence from all the other members.

What we would do is when Romy was on tour with The xx for [their third album] I See You and I was on tour in different cities, by luck, we’d be playing the same festivals and we’d be in the same cities. So we would do afternoons in hotels and write together. I remember traveling to Berlin to meet her there and spend a few days with her when she was playing there. We’d spend time in her hotel room together and then she would take me to clubs at night. Usually, when she’d take me out, she’d write everything I said, which on the outside looked like a really bad date because I was talking on my own and she was on her phone, writing everything I said. Then in the morning, she’d pull all those notes out and then she’d say, we can write a song with this. So just techniques like that, which I’ve never really tried. It was nice to have someone that can observe and someone who could guide me. She also gave me melody tricks and ideas, and I think, in general, Romy is really good at structure. She was a great help for sure.

Do you think “French Countryside” is the most vulnerable song you’ve ever written?

I don’t know. Maybe. It’s definitely one of the songs where I’m not trying to show my strength, which is usually what I do. Even when I wrote a song like “Adore” in Savages, which is a slow song, but the image of the fist on the cover, it was always showing defiance. So on “French Countryside,” I’m not trying to show my strengths. It’s a promise song…promises that I might not keep, but a desire to live. It’s a little bit less on the offensive.

Did you have some kind of realization or set of experiences that allowed you to write in that way?

I think I was broken down, in a way. I was touring so much and I felt decomposed and I needed to recompose myself. I felt in danger of being in a position where I could feel too fragmented and I felt quite on the edge, I think. To make this record, I needed to try to recompose elements of myself that I hadn’t really been paying attention to. A lot of what I had been doing in Savages was to push forward and always trying to keep everyone on track and make things happen. It was a lot of energy in doing that. I needed to go and hide for a while and write and not feel responsible for anybody else but myself. It was a time where I needed to just forget all responsibilities. So I think it shows in the record. I think it’s the first time I sing about self-doubt, for instance, in a song like “Innocence” or “French Countryside.”

To Love Is To Live is out on June 12 via Caroline Records. Preorder the album here.