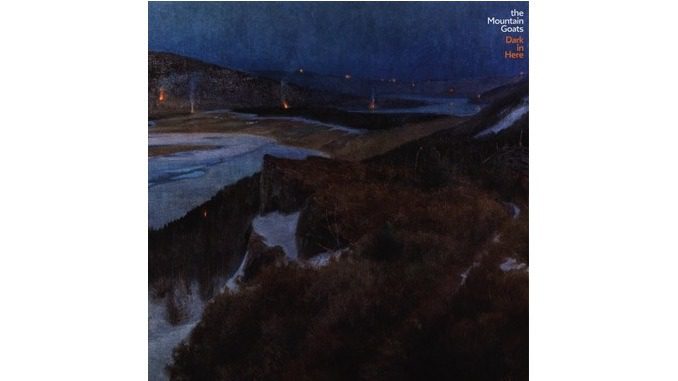 When will the blessed day come when we stop viewing pop culture and art through the lens of COVID-19? Sometime in August? October, December? Jan. 1, 2022? Are we doomed to think of human existence writ large in terms of the pandemic that held Earth and all of its people in stasis for a year and some change, depending on geography and ill fortune? Maybe when every movie, every TV show, every poem and novel, and every piece of music made during or on the tail end of the outbreak has been birthed into the world, we’ll be able to move on. Until then, the most we can hope for is that the stories we tell in this era are as good as Dark in Here, the latest from The Mountain Goats.

As the tale goes, John Darnielle, Peter Hughes, John Wurster and Matt Douglas, plus guests ranging from Spooner Oldham to Marie Tomlinson Lewey, gathered together on the cusp of the pandemic in March 2020 to record Dark in Here, as well as their October 2020 release Getting Into Knives. Darnielle has a head full of songs, or at least ideas for songs, any given day of the week; the man can’t stop imagining and dreaming, no matter how much he distracts himself with tabletop and trading card games (or maybe because of those distractions).

He also apparently has the gift of foresight, which, all things considered, sounds lonelier than lockdown. It goes without saying Darnielle didn’t actually know what was coming when nearly nobody else did, but Dark in Here’s accidental prescience suggests that, up to and throughout the album’s production, he was already flirting with the same wavelength the rest of us wound up on. Despite his many preoccupations, the man had anxiety on the brain. “Let my phobias control my habits / Let my habits form the shapes of days,” he sings on the album’s fifth track, “Lizard Suit,” over punctuating piano chords and snare drums. “All alone up on the rooftop sometimes / under the beacons where the lightning plays.”

The band’s playing the kind of music you’d expect to hear in intimate surroundings, like a small jazz venue known only to locals and tucked in a basement beneath urban streets. Not that The Mountain Goats don’t make cool music, but “Lizard Suit” exudes a variety of cool—unfussy, restrained and hushed until the outro—that contrasts with the songs of, say, In League with Dragons, which read as boisterous by comparison. These are songs to filter our social paranoia and emotional grief through: calm, deliberate and well-considered. Other than “The Destruction of the Kola Superdeep Borehole Tower,” a mouthful of a track name, The Mountain Goats feel like they’re holding themselves back. This is a feature, though, not a bug. Making relaxed music in a decidedly unrelaxed time is perhaps the most correct response to the moment. Everyone’s on edge.

A single album can’t provide solace from societal taint, of course. It can’t cure disease or dispel cruelty from a culture. But music can heal individuals on psychic levels by helping them exorcise their ever-piling neuroses. Dark in Here doesn’t exactly capture America’s emerging comprehension that, in fact, there’s rot at the country’s core that requires swift remediation; mostly it gives opportunities to reflect on and recover, if only slightly, from our national trauma.

Don’t think of Dark in Here as a COVID album, though. The music is so good, so cohesive and confidently made, that the record’s relevance will live on well beyond the 2020s; Dark in Here won’t become a relic of its time, but a marker. This happened. This is what The Mountain Goats did when this happened. Maybe listening to Dark in Here will help their audience move forward, even if the band puts on no such airs. They’re straightforward. They’re even realistic about what “moving forward” even means when fucking up is fundamental to human nature: “We’ve made mistakes / Everyone spots their own mess when the dawn breaks,” Darnielle murmurs on “When a Powerful Animal Comes.” The dawn has broken and we all know the myriad “oopsies” that led us to where we are now. Dark in Here isn’t a solution to the problem. It’s just a damn good soundtrack.

Bostonian culture journalist Andy Crump covers the movies, beer, music, and being a dad for way too many outlets, perhaps even yours. He has contributed to Paste since 2013. You can follow him on Twitter and find his collected work at his personal blog. He’s composed of roughly 65% craft beer.