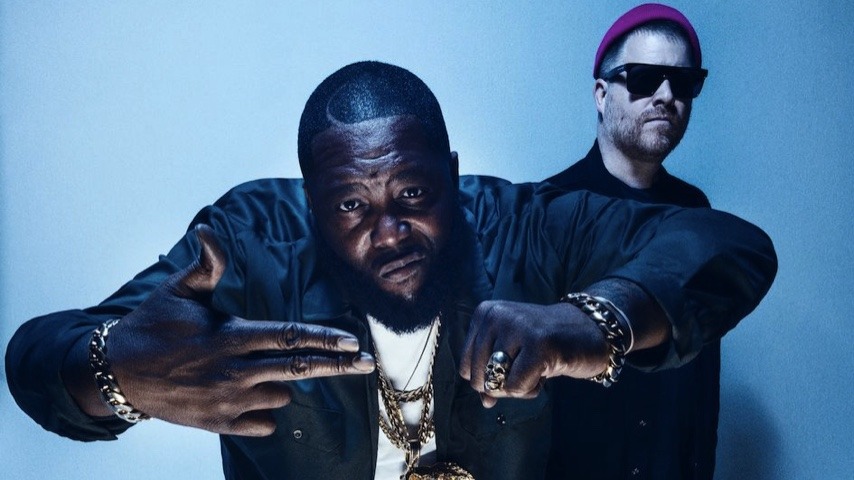 Killer Mike begins the second verse of “Pulling the Pin,” a track from Run the Jewels’ new album RTJ4 by complaining that “every day’s like a satanic ritual.” As the verse goes on, the MC goes on to rhyme “ritual” with “spiritual,” “invincible,” “pinnacle,” “mis’rable,” despicable,” “critical,” “cynical,” “typical,” “physical,” “political,” “miracle,” “biblical,” “pivotal,” “digital,” “this pistol,” “pitiful,” “criminal,” “minimal,” “principle,” “residual” and “difficult.”

It’s a bravura achievement. It’s hard enough to rhyme a single syllable at the end of a line, but here Killer Mike is rhyming three-syllable clusters—two short-I sounds and an ull ending—over and over again, both at the end of lines and in the middle of lines.

And it’s not like he just rapped the rhyming dictionary in the studio; he wove these words into the album’s most effective, most personal passage. In this stanza, Mike wrestles with his conscience on how to balance his burning desire for more money with his promises to his mama and his pastor to be good and honest.

Whatever else you may think of contemporary hip hop, it’s impossible to deny that its artists have raised the art of rhyming to heights unglimpsed since the heyday of the American Songbook (when Cole Porter wrote tongue twisters like “Good authors, too, who once knew better words/ Now only use four-letter words/ Writing prose,/ Anything goes.”).

Critics don’t talk about it much, but rhyme is one of the foundational pleasures of popular song—and has been for centuries. There’s something about the closure of a rhyme that’s every bit as satisfying as the resolution of a chord progression or the completion of a melodic line. And they work in similar ways.

When the vocalist delivers the last word of the first rhyming line, it sparks a question in the listener’s mind: How will this word be echoed in the next rhyming line? When a sequence of notes or a sequence of chords go by, it raises a similar question in the hearer’s head: How will this be resolved? When all three questions are answered on the same beat, the gratification is multiplied and fortified.

The trick for the rhymer—as for the melodicist or the harmonizer—is to make the answer sound both surprising and inevitable. You don’t want the listener to guess the rhyme before it arrives on the first listen, but neither do you want hearer to say, “No one would ever say that.”

What Run the Jewels and the best of their hip-hop brethren have done is densify and intensify the impact of rhyme. They do this by looking for double-syllable rhymes, triple-syllable rhymes, sometimes even quadruple rhymes. They do this by rhyming not just couplets but also half-lines. They supplement this by using alliteration (“predictin’ prison population by who scoring the lowest and usually the lowest scores the poorest”), assonance (“Business time, I’m on mine, I be mindin’ mine, every time on my grind, I’m just tryna shine”) and the other tricks of the trade.

Check out these four lines from Run the Jewels’ “Holy Calamafuck”: “ Ditch the payback, allow me to state that/ All that forth-back, we don’t play that/ You want beef, bruh? You just state that/ And we steak that, fry and bake that.” It’s as if every word reflects a word nearby until the reflections go on and on into infinity as when you’re standing between two mirrors.

But while rhyming is getting more intricate and ambitious in hip hop, it seems to be getting lazier and sloppier everywhere else. Nashville, for example, once took pride in its perfect rhymes. Then sometime in the ‘80s, it became okay to use near rhymes: as long as the vowel sounded the same, it was acceptable to use a final consonant that was similar to the previous final consonant. And in this century it became tolerable to use what I call remote-rhyme: as long as the vowel sound in the same, it doesn’t matter what the consonants are.

The average listener may not notice what’s going on, but they unconsciously sense that they’re not getting the word-sound satisfaction that they used to get. They don’t know why the songwriting sounds duller, but they can feel that it does.

A great example of this is “Does to Me,” a #4 country hit single earlier this year by Luke Combs (with a guest vocal by Eric Church). The song—written by Combs, Tyler Reeve and Ray Fulcher—is a series of examples of the narrator’s small victories as a teenager and young adult: one good play for the football team, one date with the school’s most popular girl, bailing his brother out of jail, giving a drunken speech as best man at a wedding. After each little vignette comes this two-line refrain: “And that might not mean much to you/ But it does to me.”

But here’s the thing: the refrain, the most important part of the song, doesn’t rhyme with anything; it’s hanging out there like a forgotten piece of prose. And here are some of the rhymes the verses use: “in/hit,” “queen/week,” “lucky/a king,” “back/that,” “friend/him” and “deep/speech.” Those rhymes are such a stretch that they’re hardly rhymes at all. The lyrics sound more like that inebriated wedding speech than like a well-crafted song.

You might argue that the rhymes or lack thereof don’t matter if the song is popular enough with the public to hit the top-five. But that’s like saying presidents shouldn’t be criticized if they’re popular enough to get elected—and look at some of the presidents we’ve had the past few decades. It’s sad to see rhyme declining in Nashville—once ground zero for song craftsmanship—and in indie rock, especially at a time when wordplay is climbing new peaks in hip hop.

But is rhyme absolutely necessary to song? After all, rhyme has all but disappeared from modern poetry in English. If poetry can thrive without rhyme, why not song?

Well, song can succeed without rhyme, but you have to understand that there’s a trade-off. You’re gambling that what you gain in freedom and precision of expression will be greater than what you lose in vocal pleasure. You can win that bet, but you’re taking a big risk. And it’s a lot harder to pull off that trick in music, because the underlying melody and rhythm create expectations that don’t exist in poetry.

The best example of song-without-rhyme is the long career of X: the L.A. punk quartet founded—not coincidentally—by two accomplished poets: John Doe and Exene Cervenka. They hadn’t written rhyming poetry, they figured, so why should they write rhyming lyrics? They compensated for the lack of word-echo pleasure by developing a wholly original sound. Over rapid tempos, the twin lead vocals galloped forward like two racehorses nosing ahead or falling behind the other. This sent the small, tightly packed clusters of words hurtling forward with maximum impact.

This year is the 40th anniversary of the band’s landmark debut album, Los Angeles, produced by the Doors’ Ray Manzarek and breaking down the Anglophilia of the American punk scene. The reunited quartet is celebrating the occasion by releasing Alphabetland, a newly written and recorded album that recaptures their early approach and once again makes the case for rock ‘n’ roll without rhyme.

It would be inaccurate to describe the new album as rhyme-free, for about half the songs have some kind of rhyme scheme, and several others use an occasional rhyme. Four decades of working primarily as songsters rather than poets have made the writers more tolerant of rhyme. But two of the songs, “Delta 88 Nightmare” and “Cyrano de Berger’s Back,” are revised versions of outtakes from Los Angeles, and several of the new songs follow the same strategy of putting unrhymed modern poems to high-octane rock ‘n’ roll.

The second song, “Free,” for example, finds Doe describing a near-future American apocalypse in these foreshortened, five-syllable lines: “the church is burning/ bullets are flying/ you hurt my sister/ she didn’t do nothing/ the sky is fire/ the rocks are sighing/ it’s all so quiet/ at the end.”

Because rhyme can’t supply structure to the language, Billy Zoom’s choppy guitar riff and Doe’s equally choppy vocal phrasing provide the architecture. The gaps of meaning between the phrases “she didn’t do nothing,” “the sky is fire” and “the rocks are sighing” are so huge and tantalizing that they pull the listener along without the signposts of rhyme.

Another song, “Angel on the Road,” is a hitchhiking song that begins with a few rhymes and then abandons them to sing a poem about a strange encounter: “I’ll have to hitch a ride,” Cervenka sings. “He downshifts his beautiful rig; the door steams open and I climb in. I wish I was someone else, someone I don’t even know.” The evocative language redeems the lack of rhyme, and the rhythm redeems the literary language.

Maybe that’s lesson we can take from the state of rhyming in 2020. If you’re going to focus on rhyme, do it with all your imagination and all your cogitation, as Killer Mike and El P have in Run with Jewels. If you’re going to make rhyme a secondary concern, don’t make half-hearted gestures in its direction, as Combs has done. Cut loose from it as Doe and Cervenka have and use that freedom to create other effects.