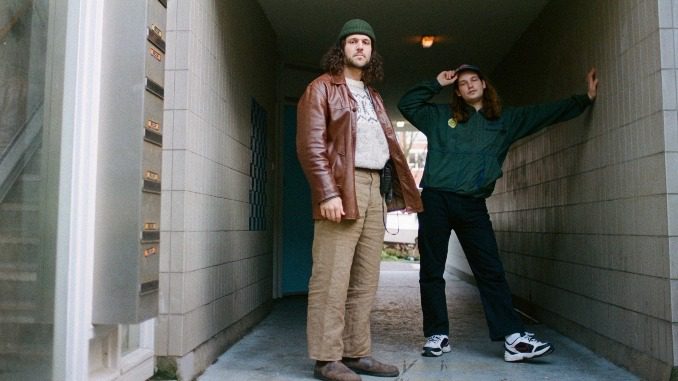 Amsterdam-based duo Feng Suave have released a new single in “Tomb For Rockets,” alongside an accompanying music video. The new track is the band’s first new release since 2020’s Warping Youth, and comes ahead of a new body of work expected later this year.

In typical Feng Suave fashion, Daniël Schoemaker and Daniël de Jong expertly deliver sunny, go-with-flow indie-pop on “Tomb For Rockets.” The band has cited the easy groove of Bill Withers as inspiration, and hints of that ‘70s soul sneak their way into the Feng Suave’s sound with their choral harmonies and a serene guitar sound. The new single’s music video, directed by Bob Sizoo, was shot on VHS and captures all the band’s lovable quirks and inspired fashion choices.

Making the music video for “Tomb For Rockets” wasn’t the only time Feng Suave went analog on the latest project. The band elaborated on the song’s creation in a statement:

For this release, we decided to record analogue to tape. This was a first for us and provided a nice change from our previous recording experiences which often involved overdubbing every instrument onto a digital grid, and this provided us an opportunity to capture a raw and dense sound. By avoiding the usual computerised workstation and focussing in and around analogue instruments, it changed a lot for us creatively and allowed us to focus more on capturing a genuine moment rather than recording a flawless take.

We spent a long time looking for the right structure in this tune and had a hard time coming up with something that felt laid back and breezy without sounding uninspired or too easy. The lyrics however came very naturally and when combined with the music they make something that feels quite close to a love song.

Check out the music video for “Tomb For Rockets” below.