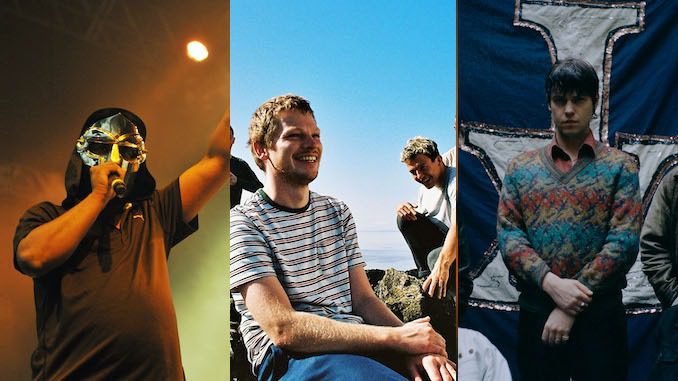 May’s first release week is a doozy, with comebacks such as Doss, debuts such as Mia Joy and Little Snake, and bangers from seasoned rockers like Squid. There’s even a posthumous release for the legendary MF DOOM, showing the vast expanse of his unreleased catalog slowly coming to light. As we plow through into another month with a light starting to shine brightly at the end of the tunnel, here’s some of Paste’s favorite releases of the week.

Doss’ first solo record in about seven years is dubbed 4 New Hit Songs, and that title is the straight-up truth. The electro-pop producer doesn’t miss for a second on the EP, delivering bubbly banger after banger with her high-pitched vocals and bright dance beats. Each track is steeped in feel-good energy, culminating with the euphoric ode to eurodance that is “On Your Mind.” Doss said on Twitter that “Putting this EP out is like meeting with an old friend you haven’t seen in a while,” and this reunion is a more-than-welcome moment of pure happiness. —Carli Scolforo

Iceage approach each new sonic evolution with relentlessness and bloodshot eyes—the same kind of painstaking attention to detail that turns their lyrics into immersive worlds unto themselves. And funnily enough, Iceage are pretty great at churning out songs about cold-blooded relentlessness, too. You can feel the weight of this album the moment it begins—the fierce, off-kilter rumble that opens “Shelter Song’’ is nothing if not goosebump-inducing. Part ferocious guitar jangle, part foggy, solemn bustle recalling the lead-up to battle, this opening sequence is a sign of the multi-dimensional sounds to come. It’s almost foolishly over the top. It’s painfully poignant. It’s delightfully disheveled. It’s irresistible in its mystical doom. And we’d expect nothing less from Iceage.—Lizzie Manno

Little Snake’s debut is an ambitious one, and it does not hold back. When you have a cosign from electronic innovator Flying Lotus, you can afford to be a bit out-there. Little Snake’s debut album plays with one’s perception of reality and clarity, flipping back and forth from incoherence to create a grotesque-yet-fascinating deconstruction of his art. The techno and hip-hop influences of his come together to create an auditory assault that slowly becomes clearer with each listen. It’s an album with so much to offer, and it utilizes its time well. —Jade Gomez

McKinley Dixon: For My Mama and Anyone Who Look Like Her

“All moments, past, present, and future, always have existed, always will exist,” Kurt Vonnegut once wrote. “It is just an illusion we have here on Earth that one moment follows another one, like beads on a string, and that once a moment is gone it is gone forever.” Richmond, Virginia’s McKinley Dixon, too, rejects that illusion on his forthcoming third album (and Spacebomb debut), using jazzy, avant-garde art-rap as a means of processing his past and creating a better future. Emerging from the devastation of his best friend’s tragic death in 2018, Dixon examines Black struggles and the societal factors that exacerbate them, fending off self-doubt, regret and trauma as he fights to find catharsis For My Mama and Anyone Who Look Like Her. The result is a powerful, personal act of “musical time travel” that aims to ease the pain it catalogs by breaking down barriers of understanding, tracing a nonlinear path for others to follow.—Scott Russell

MF DOOM and Czarface: Super What?

Czarface, the hip-hop supergroup comprised of DJ 7L, Esoteric, and Inspectah Deck, announced their latest collaboration with the late MF DOOM, initially slated for release April 2020 and postponed due to the pandemic. Spanning over ten tracks with fully stacked features ranging from Del the Funky Homosapien to Godforbid, the first posthumous release since DOOM’s passing is chilling, with his signature reference-laden raps over soulful beats. It’s a meeting of the minds straight out of the last pages of a comic book and is a delightful reminder of a legend’s versatility. —Jade Gomez

After a breakup, Mia Joy, born Mia Rocha, decided to embark on a solo career. Her debut album, Spirit Tamer is an ethereal dream pop exploration of her deepest secrets. Rocha is a self-proclaimed private person, and the ambient-leaning Spirit Tamer is her way of coaxing us into her secret universe—one filled with biting humor, unwelcome changes and long-awaited healing. It opens with a fully instrumental title track in which Rocha’s melotic wails float above reverberating chords, fluctuating from low hums to piercing lamentations. It’s as if she captured all of her emotions in a sealed jar and released them at once, briefly embracing the disorienting noise before it eventually dissipates. It captures Rocha’s inner loneliness, cultivates healing, and creates a safe space where she can work through her darkest moments.—Carolyn Droke

P O T I O N S is nasimiYu’s joyous return after a seven-year hiatus from making music. Beginning with the release of lead single “Watercolor,” the singer/dancer/activist has proven that sophomore album was well worth the wait as she flexes her muscles in unique arrangements and raw, honest lyricism. From the dizzying layered vocals of “Immigrant” to the eastern influences on “Parasite’ to the extraordinarily intimate piano ballad of “Secretsecret,” nasimiYu achieves pure beauty on the moving and highly varied LP. The album’s closer “Archipelago” is all emotion as she hits some gorgeous low notes alongside a lullaby-like piano arrangement. —Carli Scolforo

Though Bright Green Field is easily Squid’s most musically varied and ambitious work yet, the British quintet—whose contemporaries include black midi and Black Country, New Road—remains thematically tethered to the pervasive anxiety and fear that have defined them. Where “The Cleaner,” the highlight from 2019’s Town Centre EP, hinted at simultaneously more abrasive and hooky grooves to come, Bright Green Field delivers on that promise without diminishing Squid’s mania. —Max Freedman

Montreal-based TEKE::TEKE is a band that feels out-of-this world, as if they’ve dropped in from some storybook universe to deliver high energy psychedelic rock. The band combines storytelling and sounds that pull from their Japanese culture with a unique blend of urgent, fuzzy rhythms and surf rock sensibilities. Shirushi, the band’s debut album, plays with pacing with high points like the transition between the mellow, slinky “Dobugawa” directly into the mad racket of “Barbara” and its wild flute playing. Cinematic and transportive, you’d be hard-pressed to find another band doing it like TEKE::TEKE. —Carli Scolforo

The slick-talking New York rapper Wiki and Philadelphia-born experimental producer NAH have teamed up for a disorienting collaboration. The short songs feel like a journey into Wiki’s mind soundtracked by paranoia as he constantly readjusts to match NAH’s hallucinatory soundscapes. The production feels like long-lost sonic artifacts that have been unearthed, and it is a stunning reminder of the duo’s versatility. —Jade Gomez