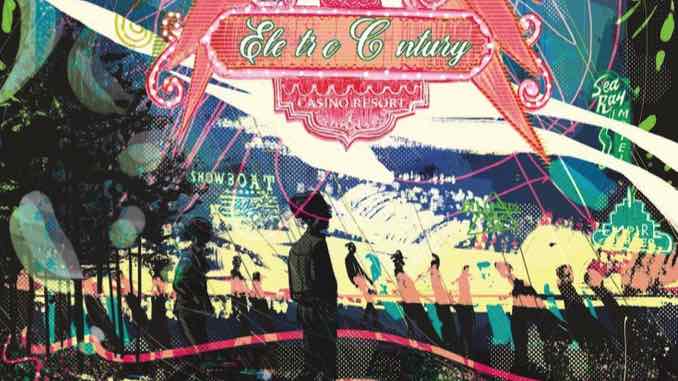 My Chemical Romance have never been strangers to the world of comics. Their 2010 album Danger Days: The True Lives of the Fabulous Killjoys was adapted into a full-length graphic novel in 2013 by vocalist Gerard Way and writer Shaun Simon, and in 2019 bassist Mikey Way collaborated with Simon on the excellent Collapser series. Today (June 11), writers Mikey Way and Simon and illustrator Toby Cypress are giving Paste readers an exclusive preview of their new series Electric Century, published by Z2 Comics and paired with a self-titled album by Way’s band of the same name. Below, see what Way and Simon have to say about working together on the series before checking out a few pages.

Shaun Simon:
Electric Century deals with former childhood sitcom star, Johnny Ashford, who’s replaced the high he got from fame with drink and drugs. We start off when Johnny drunk drives into a storefront window. With the intention to get clean, Johnny seeks the help of hypnotherapist Dr. Evers who sends Johnny to his “happy place” — the Jersey shore circa the 1980’s. Soon, Johnny craves his weekly trips to the Electric Century, the casino on the hypnotic boardwalk, and never wants to go home. But when Johnny realizes he’s now become addicted to this fantasy world, his dreams come crashing down and he’s forced to face his demons and addictions head on. Never going home may not be great as it appears.

Mikey Way: Shaun and I have been friends for a very long time. It’s one of those rare cases of the type of friend that knows what you’re thinking without you even saying it. This carries over to collaborating on projects, as the process is seamless and rewarding. I look to tell many amazing stories in the future with Shaun.

Simon: Mikey is one of my oldest and best friends. We spent a few years together sharing studio space in our separate bands and then a few more sharing the backseat of a van, which we referred to as the Bellagio, across the country. We understand each other without having to spell anything out and our minds work in similar ways. So, when we’re working on a book, it’s like hanging out with my old friend again. We’re shooting each other texts or getting on the phone and throwing story ideas around. It’s like we’re hanging out in the studio or back of the van again. Aside from being my friend, Mikey is one of the most talented people I know. The humor, drama, weirdness, darkness, and characterization he brings to the table along with his sense of story astounds me.

Way: I feel like this is a match made in heaven. As a kid I remember listening to music as I read comic books, so the connection was always there. I also feel like comic people love music and music people love comics. There’s absolutely shared DNA. Music is another great avenue to help tell a visual story. Z2 has something special going in this realm.

Preview Electric Century below. You can grab a copy here.