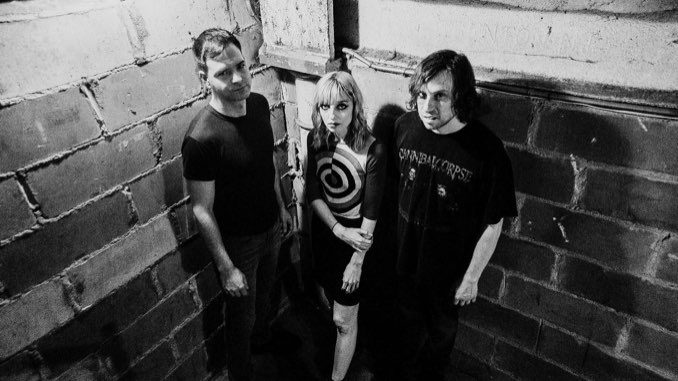 This summer, Brooklyn-via-New Haven trio Hellrazor will release Heaven’s Gate, the follow-up to their 2016 debut Satan Smile. “Jello Stars,” our third preview of the album after May 2019’s “Landscaper” and November 2021’s “Globbed,” is premiering right here at Paste today (May 10).

Though it’s just now surfacing officially, “Jello Stars” has been in Hellrazor’s orbit since not long after Satan Smile’s release, as the band tell Paste: “We’ve played ‘Jello Stars’ in our live set since five years ago, and most of the song was tracked around then. We recently added more guitars and re-tracked the vocals. Some of the lyrics were revised to align with the dystopian themes on the next record. Most of the song is about ghosts in the machine and paranoia over potentially uncontrollable A.I.”

Hellrazor itself has changed, too: Bandleader, vocalist and guitarist Michael Falcone (Speedy Ortiz, Ovlov) is now joined by bassist Kate Meizner (The Glow, Jobber, Potty Mouth touring alum) and drummer Michael Henss (HEELE). Falcone started Hellrazor in 2006, with the DIY songwriting and cassette recording project gradually evolving into a New Haven heavy rock band, then a nationally touring act by 2016. Heaven’s Gate has been in the works since December of that year, touching on everything from “labor conditions to surveillance technology to extravagant PR campaigns,” per press materials.

“Jello Stars” retains the lo-fi rock sensibility of foundational Hellrazor influences like Sebadoh and Guided by Voices, but those rough edges are secondary to hazy pop hooks that the band embed in rushing, rippling walls of distorted guitar. Henss’ drums race and Meizner’s bass notes fly while Falcone’s vocals sit low in the mix over an arpeggiated riff, and the trio shift into a noticeably higher gear in the track’s sticky choruses, burying those “Jello Stars” deep inside your brain. Feedback encroaches on the outro, like a flying saucer hovering just above the track.

Listen to “Jello Stars” below.