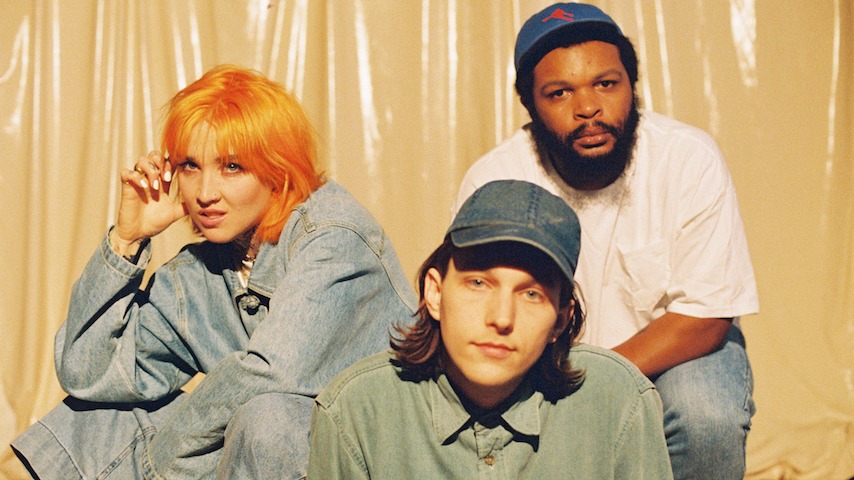 These days, most interviews are conducted virtually, via Zoom or Facetime, in separate living rooms and offices, in different states and time zones, often lacking the colorful details a writer might ascertain from being in the same room as their subject. But travel wasn’t necessary in getting to the heart of Chicago rock band Dehd, whose fantastic new album Flower of Devotion arrives this Friday, July 17, on Fire Talk Records. On a recent afternoon in late June, after some technical hiccups, Emily Kempf and Jason Balla (formerly of NE-HI) finally appear on my screen, video-calling from the sunny streets of Chicago. Primary lyricist/bassist Kempf and guitarist Balla are missing their third musketeer, drummer Eric McGrady, who usually passes on interviews.

But it’s not a normal late-spring Illinois afternoon. It’s approximately one month after George Floyd was killed by Minneapolis police, and Kempf and Balla are both masked and slightly fatigued after attending Black Lives Matter protests. Sirens fade in and out of the audio, as does mention of the current state of our country and culture —which is impossible to ignore.

The band, who’ve been playing together for around four years, released an album just last year, called Water—an understated rock effort that, while paired-back in the sonic sense, was a strong, surf-y indie album that immediately caught the attention of the music media, including us here at Paste. Like Flower of Devotion, their best release yet, it’s the perfect summer rock album, full of trills, thrills, tightly-woven guitar chords and hot-weather longing.

They wasted no time in crafting their next album. Just a year after Water, which followed a breakup between Kempf and Balla, their third release Flower of Devotion notably tracks the reconciliation—and the friendship and partnership that formed thereafter.

“We like having the focus on the possibility of people to have reconciliation and move from one form of relationship to another, and how it is possible,” Kempf says, perched outside in downtown Chicago. “And it’s not rare or weird. Once we were lovers, but now we’re friends, and we’re bandmates and business partners.”

Relationship-building is at the core of Dehd and Flower of Devotion. Lead single “Loner,” a head-turning synthy dance-able track, is all about the desire to be near others—and being OK with admitting that very human need.

“It’s okay to be lighthearted in the face of despair,” Kempf wrote at the time of the song’s release. “Being alone and grieving is very isolating, but then you come out of your little cave of grief, and your friends and family and partner are all there to pat you on the back and hold you until you have to go back into the cave of grief alone.”

There certainly wasn’t much alone time during the two weeks when Dehd recorded Flower of Devotion. Kempf, Balla and McGrady self-recorded and produced the album in Chicago studio Jamdek, located in the Humboldt Park neighborhood where they live, and the way they so casually describe the process, you’d think they were on a mission to make quarantine sourdough and nothing more (though they actually recorded the album in spring and summer of 2019):

“They gave us the keys for two weeks, and this is what we were able to whip up,” Balla says.

This just happens to be one of the best indie-rock albums of 2020, and it wasn’t made by accident. The addition of drum machines and the freedom to experiment are what makes Flower of Devotion such a joyfully oddball, and at times hilarious, journey. “Haha” features a string of actual “ha ha has,” while “Flood” spaces out into an ’80s-inspired trip, and “Apart,” the only song which is fronted entirely by McGrady, sounds like an effortlessly catchy mix between The Cure and Gram Parsons. Drum bells, overdubs, feedback, vocal hopscotch between Kempf and Balla and a wash of reverb permeate the album. It was a throw-it-on-the-wall-and-see-what-sticks approach, and, when it did finally stick, “you have your celebration in the control room,” as Balla put it.

“We just decided to take it up a level, but not too much, just a little bit,” Kempf says. “I spent a lot more time in the actual recording studio. We had a lot more space, it was a lot more calm and we left more room for experimentation. We just left more room for us to play and add more layers to our sounds. And just being a little bit more in tune with what we wanted.” She later adds, “I’m doing better at having fun with recording. Traditionally I hate it, but this last recording was the funnest or the most comfortable I’ve been. So I think the next one will be even more comfortable and lend more room for me to explore.”

It was a two-pronged growth process. While loosening up in the sound booth, the band also honed their technical and songwriting skills.

“We’ve been really hands-on in making things ourselves,” Balla says. “We just learned a lot and then have been able to use that new knowledge and skills that we’ve developed—both in the studio [and] songwriting have grown together at the same time. And also at a time where we were figuring out more of what kind of band we actually are. It was like the perfect marriage of those three things.”

When it comes to the actual ethos of the record, you needn’t look further than the new album’s title to unearth deeper meaning.

“I was thinking about the concept of a garden and emotions being flowers, in the moment when different things are blooming, the ‘Flower of Devotion’ blooming, when you’re in a new relationship with someone, maybe a love relationship or a friendship, a different form of intimacy blossoms,” Kempf says of the title.

It can feel a little myopic to be analyzing rock music when the ongoing civil rights uprising, among other things, should be the center of attention. But Dehd’s art isn’t in opposition to social activism. Kempf, Balla and McGrady are deeply ingrained in their local community, particularly the vibrant Chicago DIY scene which has supported them along the way, and they’re not blind to the larger issues overwhelming the U.S. right now. They recently volunteered their tour van to anyone who might need a vehicle for distributing protest supplies, and their website houses Black Lives Matter resources. I ended our call by asking Barbara Brown Taylor’s ever-popular question, “What is saving your life right now?” But both Kempf’s and Balla’s answers were attuned to lives beyond their own.

Balla’s answer: “Both a sense of urgency and tides of change, and also being able to cook a lot at home during quarantine.”

Despite the odds against them, the members of Dehd are friends to each other and friends to justice. If that’s not the Best of What’s Next in rock music, then I don’t know what is.