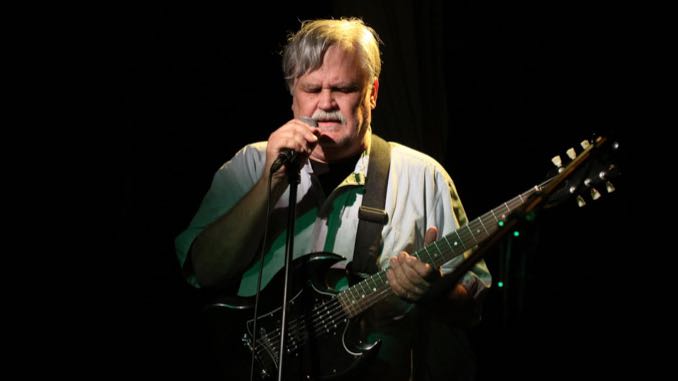 On May 1, 2017, Col. Bruce Hampton was performing an encore at the Fox Theatre in Atlanta after a concert celebrating his 70th birthday—a performance that would sadly be his last. Onstage with him were some of the musicians he’d played with or influenced over his more-than-five-decade career—including Derek Trucks, Jimmy Herring, John Popper, Susan Tedeschi, Warren Haynes and Chuck Leavell. During “Turn On Your Love Light,” Hampton suffered a heart attack, collapsing onstage while the band played on, not realizing the theatrical bandleader was in trouble. He would die at Emory Hospital later that night.

In a new book, author Jerry Grillo recounts the life of the legendary Atlanta musician and actor, The Music and Mythocracy of Col. Bruce Hampton. Below is an exclusive excerpt from the chapter on that fateful concert at the Fox, titled “Bruce Ascending.” The book is available through your local book store or online at Bookshop.org.

Everybody’s going to die, and I look at death as a new beginning, basically.
—Bruce Hampton, August 2012

“He walks onstage and offstage wearing it, and his hands are always on it, or he has someone hand it to him, and then he hands it back, but he does not put his guitar in a guitar stand—it’s never been in a guitar stand,” said Slocum, who spent many hours playing music with Herring and the man who was now lying facedown on the stage, his left arm draped over a monitor, out of Matt’s sight line.

But Jimmy had put his guitar down, so Matt didn’t have to see Col. Bruce Hampton go down to know something wasn’t right.

Bruce had been clear with friends that he wasn’t thrilled with the prospect of Hampton 70. To start with, it wasn’t his idea, and it was out of his control. He’d hurt some old friends by either not inviting them or uninviting them, and this wasn’t the Vista Room. All week leading up to the show he told Matthew Wilson, “You’re gonna kill me, sir.” And he kept giving Wilson requests for more tickets.

Privately, Bruce wasn’t really looking forward to May 1. Publicly, he presented a stiff upper lip and a positive, if somewhat detached, perspective. “I’m a reluctant invited guest,” he told music writer Brenda Stepp for an interview that appeared on ArtsATL.org on April 28. “But it does look like a wonderful event, and all the money goes to charity. So I think it’s going to be a lot of fun.”

There was one rehearsal. On April 30, Bruce’s birthday and the day before Hampton 70, most of the musicians met at the Vista Room. Chuck Leavell couldn’t make it, and neither could Derek Trucks and Susan Tedeschi. But everyone else was there (thirty-plus musicians). Looking around the place, trumpeter Papa J (a.k.a. Joey Sommerville) realized he had played with many of the artists before at one time or another.

Sommerville had toured and recorded with Phish, and his relationship with Bruce went back twenty-five years. But recently he’d been popping in at the Vista Room for the Thursday night jam hosted by Bruce and the latest version of the Madrid Express. The band was fronted by Bruce’s new protégé Tyler Neal, a talented finger-picking guitarist with a soaring voice (and who had actually taken drum lessons from Yonrico Scott). Darren Stanley was still on drums, and Franher Joseph had taken over on bass. But each Thursday night had featured new guests. Some of these musicians would be playing at the Fox for Hampton 70, some would perform at Terminal West for the after-party, and some would appear at both venues.

While Madrid Express formed the nucleus of the opening band at Hampton 70: A Celebration of Col. Bruce, the group was also joined by Ike Stubblefield, Carter Herring (Jimmy’s son, a fine guitarist), and Matt Slocum. The band’s up-tempo blues-rock groove behind Bruce’s vocals on “There Was a Time” set the tone for the evening, as band after band of virtuosos took the stage.

Bruce arrived at the Fox between 11:00 a.m. and noon and spent most of the day holding court backstage, Wilson remembered. Chuck Leavell, Derek Trucks, and Susan Tedeschi were there early for soundchecks and rehearsal, having missed the night before at the Vista Room. Arriving early gave Bruce a chance to visit with his old friends, and plenty of time to poke through the cigar box of baseball cards Derek and Susan gave him. (Bruce was a collector of sports memorabilia. When he found out that I have a baseball signed by Yankee old-timers, including Mickey Mantle and Joe DiMaggio, he said, “I know a guy who will give you a thousand dollars for it right now, sight unseen.”)

Atlanta writer / radio host / pop culture king Jon Waterhouse, who had been recruited to serve as emcee after Billy Bob Thornton’s late cancella-tion, took the opportunity to visit with his buddy Bruce. When they dis-cussed plans for Hampton’s seventy-first birthday, “Bruce said he’d probably be celebrating in New Orleans, at Jacques-Imo’s,” Jon declared. “He was in a great mood.”

Bruce might not have been comfortable with all the hoopla, but he warmed to the idea of so many friends showing up to play this gig for no money, just for him. The great mythmaker was humbled. He usually was uncomfortable with compliments and praise, but he accepted both that night with grace, patience, and sincerity. “That was unique for him,” Matt Wilson said. “Usually he’d turn praise into a joke or dismiss it. I remember thinking, ‘Wow, he really is enjoying this.’”

Kevin Scott, who shared musical direction duties with Duane Trucks, said he’d never seen Bruce so happy. His energetic performance that night put joy in the room. It was pure Grease. Butt-level consciousness eleven. Zambi squared. He literally left it all on the stage.

Bruce only performed six of the twenty-seven songs (of course it was six) played that night, spending just forty-five minutes of the nearly four-hour show onstage. He left after “There Was a Time” and hung out back-stage, visiting with some friends and listening to others play his favorite old standards, like “Trondossa” and “Time Is Free” (John Bell did a soulful job on vocals for both tunes).

Bruce returned to the stage to perform “Basically Frightened” with a lineup that included Johnny Knapp. Johnny surprised everyone with the obvious—an impromptu jazzy version of “Happy Birthday” when Bruce gave him a solo. “It’s his birthday, and I was surprised that nobody sang to him yet, so I took the initiative,” Johnny said later. He played the tune and pointed up at Bruce, sitting on a stool with a guitar, grinning like a goof.
“Bruce looked so good that night; his hair was fabulous; he was singing great, and I remember playing ‘Fixin’ to Die’ with him, and he played this amazing solo,” said Susan Tedeschi. “It just seemed as if everything was ?owing perfectly.”

After “Fixin to Die,” “Space Is the Place,” and a thirteen-minute version of “I’m So Glad,” everyone left the stage to prepare for the encore and the evening’s true Zambi moment. Then “Col. Bruce’s Military Ensemble” (about thirty musicians led by a robed Jeff Sipe) played four minutes of improvisational music that wavered on the edge of madness.

Joe Zambie appeared onstage, and Jeff Mosier recited some of Bruce’s lyrics (including Mosier’s personal favorite Bruce song, “Farmers Earn Living”). Offstage in the wings, Bruce stood near Johnny Knapp, who told him, “Well, you’ve got five minutes, then it’s all over.” Bruce replied, “I’ll be glad when it’s over.” Then the mad music onstage transitioned into the last song of the night.

In her interview with Bruce from a few days earlier, Brenda Stepp asked him if he had a favorite song, one that always made him smile. Bruce an-swered, “‘Lovelight’ by Bobby Bland. I started doing it in 1963, and I still do it today.”

He had always loved Bobby “Blue” Bland, loved covering his songs and copying his deep-throat growl. Derek Trucks has a favorite memory of a time with Bruce from years earlier, before the Tedeschi Trucks Band, when he was still leading the Derek Trucks Band: “We were playing a festival in Pensacola, and Bobby Bland was on the bill, so me and a few of the guys went with the Colonel to see the show, and that was the real highlight of the festival. Just seeing Bruce sit there like a little kid watching his idol. I’ll never forget that.”

Kevin Scott, who handled most of the musical direction for Hampton 70, decided to change up the setlist slightly the night of the show. “I’m So Glad” was originally going to be the encore (following the Military Ensemble / Zambi stuff). But Kevin decided to make “Turn On Your Lovelight” the evening’s final number, and Bruce was totally fine with that.

Hampton came back onstage as the Military Ensemble improvisational madness evolved into “Lovelight.” The stage was crammed with some of the country’s best musicians, and thirty instruments were blasting and pound-ing with spirit. Bruce did his gags, smoking the fake cigarette, checking his wristwatch, and he sang the song. The last words he said were, “I’ve got to go,” and then, “Hey.” That was a little more than two minutes into the song, and then John Popper’s harmonica ripped through the atmosphere, dom-inating, a piercing river of notes.

“The whole audience, everyone in the room, is in an ecstatic mood,” said Doug DeLoach. He had been watching Hampton for nearly four decades, and he watched Hampton 70 from one of the best vantage points in the Fox, the front row of the balcony. Doug saw it all. Three minutes into the song he saw Bruce go down, watched him do “that always-funny bow indi-cating he’s paying tribute to a great musician.”

Standing downstage right, his back to the audience, Bruce pointed to Taz [Niederauer] and indicated that the young man should step forward and take a solo. Taz, with Warren Haynes on his right and Vince Herman on his left, weaved downstage through two monitors. Bruce faltered, grabbed a mic stand with his left hand while still pointing at Taz with his right. Then he went to his knees—paying tribute. He wrapped his left arm around a mon-itor and managed to guide himself down to the ?oor as gently as a dying man could. He settled on the ?oor between the monitor that he was still clutching with his left arm, and Taz’s legs to his right.

Just before going down, before all the lovelights in the living world went out and all that remained was the sound of unbridled, loving rhythmic joy—because hearing is typically the last sense to leave us when we die—Bruce looked at Joey Somerville, playing his horn on the platform at up-stage right. Derek Trucks thought he saw the look, too. Bruce had a smile on his face.