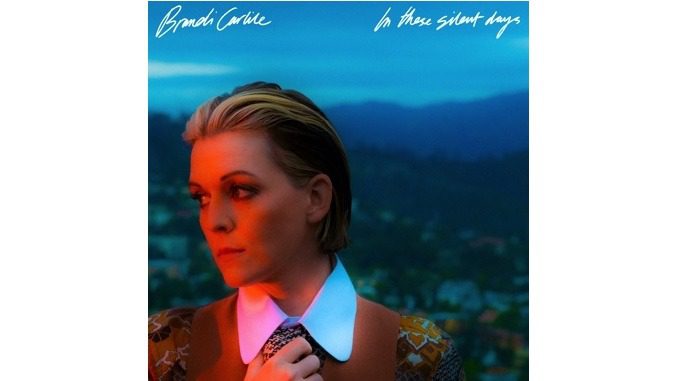 Even in the early days of her music career, it was clear Brandi Carlile was going to be big. You could feel it in the magnetism of her live performances and hear it loud and clear on her formative albums. The passion she poured into both was palpable, and—publicly, at least—she never came off as anything but gracious, humble and relatable.

To those who knew her work back then, stardom for Carlile always felt like a “when,” not an “if.”

Even so, it’s a little disorienting to see it come to fruition. Thanks to great songs and shows—not gimmicks or social media feuds, or whatever—Brandi Carlile is a big star now, the kind who plays large, iconic venues across the country, who writes a #1 New York Times bestselling memoir, wows a star-studded audience at the Grammy awards show, forms supergroups, and collaborates and duets with her heroes. (If you can only watch one YouTube video today, make it the one at that “duets” link. Or the Grammy performance. Or both. Heck, maybe watch two YouTube videos today.)

Now comes the hard part: following all that up with something that meets her established standard and showcases artistic growth while retaining all the things people love about Brandi Carlile. On her new album In These Silent Days, she stares down that challenge with typical, collected confidence.

It helps, no doubt, that she is surrounded by trusted, talented people. To make In These Silent Days, Carlile returned the same core team from her 2018 breakthrough By The Way, I Forgive You: longtime ultra-close collaborators and bandmates Phil and Tim Hanseroth, plus producers Dave Cobb and Shooter Jennings. Carlile and the Hanseroths wrote the songs at the expansive home they share in Washington state, then went to Nashville to record, where Cobb and Jennings played on just about every track.

On By The Way, Carlile expanded her sound beyond the already-ambitious Americana of her first five albums, exploring symphonic pop and rock with the aid of string sections arranged by legendary composer and conductor Paul Buckmaster. On Silent Days, she reins in the grandeur a bit, but still manages to wring her share of big moments out of a leaner sound.

Take, for example, “Broken Horses,” a muscular rocker that finds Carlile’s voice fraying as she snarls biblically at … someone. Here, the combination of her vocal chops and the searing intensity of her delivery seems to push the band to their heaviest heights:

I have ever so politely treaded softly for your grace
I have whispered through the tears and pleaded sweetly to your face
It is time to spit you out like lukewarm water from my mouth
I will always taste the apathy, but I won’t pass it down
It dies with you

The band sound particularly good, too, on “You and Me on the Rock,” an effusive love song that recalls the strummy rollercoaster folk-pop of Joni Mitchell, and the dramatic, piano-driven lead single “Right On Time,” which takes a decidedly more warts-and-all look at loving someone. (Keyboards—sometimes played by Carlile, sometimes by Jennings—are a consistent highlight on the album.)

In These Silent Days is at its best, however, when Carlile takes her foot off the gas pedal and dials up the wisdom. With its acoustic fingerpicking and tight vocal harmonies, “This Time Tomorrow” is the album’s closest cousin to her early rootsy output, and the encouragement threaded through its verses feels especially comforting in our current times. “Letter to My Past” follows a similar theme, this time echoing the knowing and poignant piano-pop of her good friend Elton John. And “Throwing Good After Bad” closes the album much like “Party of One” closed By The Way: with a devastating half-light ballad sung from the center of a strained relationship. Where “Party of One” offered a glimmer of hope for reconciliation, however, “Throwing Good After Bad” seems resigned to falling apart. “You allowed me to grow, but you know when you know,” Carlile sings, her voice quivering as strings swell. “And now the party’s over and you’re dancing alone.”

The second half of the album sags slightly, and “Mama Werewolf,” in particular, feels a little Brandy By Numbers. The problem with that, though, is that when this crew—Carlile, the Hanseroths, Cobb and Jennings—puts it on cruise control, they can still drive circles around just about everyone else. With her talent and charisma, and this group around her, it’s no wonder Carlile is the star she was always meant to be, and there’s certainly nothing about In These Silent Days that will stop her rise.

Ben Salmon is a committed night owl with an undying devotion to discovering new music. He lives in the great state of Oregon, where he hosts a killer radio show and obsesses about Kentucky basketball from afar. Ben has been writing about music for more than two decades, sometimes for websites you’ve heard of but more often for alt-weekly papers in cities across the country. Follow him on Twitter at @bcsalmon.

Watch Carlile’s 2010 performance in the Paste office below.