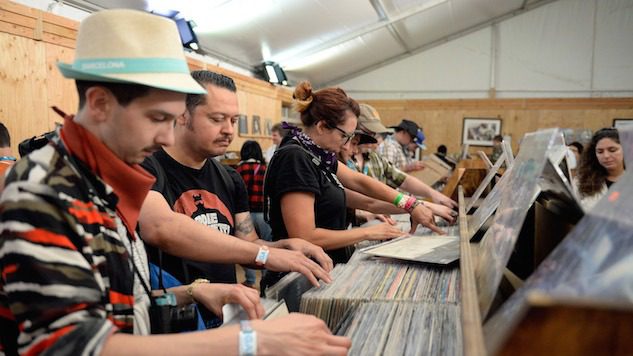 The best day of the year is upon us. No, it isn’t my birthday. Okay, maybe second-best day of the year. Regardless, prepare your wallets for another fun Record Store Day this year! The Paste staff has been hard at work compiling some of our favorite releases to prepare for. Due to the pandemic, Record Store Day will take place on June 12 and July 17. Scroll down for our picks, and then visit the Record Store Day site here for a full list of releases and participating record stores. Happy hunting, and remember to support your local record stores all year long!

Long a rarity to own on vinyl, Prospect Hummer, the magnificent collaborative EP from Animal Collective and Vashti Bunyan, is finally being repressed this Record Store Day. A gem from Animal Collective’s freak-folk era, the EP represents each artist at the top of their craft, with the legendary Bunyan’s hushed soprano falling perfectly within the hypnotizing soundscapes the band is known for. The lush, textural strumming of songs like “Baleen Sample” and the hushed crystalline guitars of “It’s You” beget an almost magical sonic experience, making a vinyl copy of Prospect Hummer a can’t miss. —Jason Friedman

Dallas rapper MO3 was a testament to the influence of Louisiana rapper Boosie Badazz. MO3’s auto-tuned croons of love and violence resonated with Badazz, resulting in an electric album that showcases the two at their best. Released shortly before MO3’s untimely death in 2020, Badazz MO3 is a heartbreaking reminder of what could’ve been. —Jade Gomez

Dedication may very well have been one of the main turning points in Chief Keef’s career as he shifted from gun-toting teenage rap star to a young man reflecting on what made him a media sensation. It is easy to get caught up in the voyeuristic pleasure of seeing Chief Keef unravel before the world’s eyes as both a rap innovator and as a criminal. Keef strips back that unfair assumption and retraces his steps to see what made him, and where he wants to go next. His sharp sense of humor often gets lost in the midst of his deadpan delivery, and Dedication is a loving take on his growth and his city. —Jade Gomez

Never before pressed on vinyl, Earthgang’s Strays With Rabies is one of the group’s finest efforts as they reinvigorate the vast rap landscape of Atlanta, taking notes from their forefathers such as Outkast and Goodie Mob. The group’s exciting chemistry shines through as they showcase their versatility ranging from club bangers to introspective slow burns with a psychedelic twist. —Jade Gomez

Piñata is the acclaimed product of powerhouse duo Freddie Gibbs and Madlib, making for one of the most discussed rap albums of the decade. Following the blaxploitation-inspired 1974 version that came out for Record Store Day 2020, this new packaging features a stunning cartoon interpretation of the two as Miami Vice’s iconic Crockett and Tubbs, capturing the ‘80s glitz in all its glory. —Jade Gomez

Linkin Park’s groundbreaking sophomore album Meteora bridged the gap between metal and hip-hop, capturing the hearts and minds of audiences across the world. Featuring some of the band’s most recognizable hits such as “Numb” and “Faint,” this repressing is a must for any fan’s collection. It would also make a lovely gift for the angsty teen in your life who has no idea what they are missing out on. —Jade Gomez

As Oneohtrix Point Never has more fully developed his singular artistic vision throughout the last decade with masterpieces like R Plus Seven and the heavily aestheticized Age Of, it can be easy to forget the musical roots of producer Daniel Lopatin. Available this Record Store Day via Mexican Summer is a vinyl repressing of five early works by OPN, including The Fall Into Time, Zones Without People, Betrayed In The Octagon, Russian Mind and Drawn And Quartered. Each album carries with it the unique perspective and clever sound design that has made Oneohtrix Point Never one of the most iconic producers of the decade. — Jason Friedman

Prince fans should prepare themselves every Record Store Day for the late artist’s estate to dig up some little nugget from the Purple One’s archives for vinyl release. For this year’s RSD Drop, Prince’s people have landed on The Truth, an album that was originally packaged within the 1988 multi-CD set Crystal Ball. Though Prince dubbed it his “acoustic album” at the time, there are still elements of electronic instrumentation throughout. In reality, this was Prince at his stripped-down and intimate best, leaving little in the way of his jaw-dropping guitar work and those swoon-inducing vocals. —Robert Ham

Tina Weymouth and Chris Frantz’s groovy Talking Heads side-project Tom Tom Club are pressing their fifth and final album The Good, The Bad, and The Funky to vinyl for the first time. Originally released in 2000 only on CD (sign of the times), the album features contributions from Parliament-Funkadelic and Talking Heads keyboardist Bernie Morrell, as well as the late Toots Hibbert. Featuring covers of Donna Summer’s “Love To Love You Baby” and Lee Perry’s “Soul Fire,” The Good, The Bad, and The Funky is one to add to your collection. —Jason Friedman

Graeme Downes’ tense, melodic pop project The Verlaines was at one of its many creative peaks in 1986, having released stunning debut album Hallelujah All The Way Home the year before and gearing up to record their masterpiece, 1987’s Bird Dog. This live recording from a pub gig in Auckland, New Zealand, captures the band at that perfect midpoint between those two LPs. The tight-knit trio (Downes on guitar and vocals, bassist Jane Dodd and drummer Robbie Yeats) slashes through seven songs from Bird Dog and a smattering of older tunes. —Robert Ham