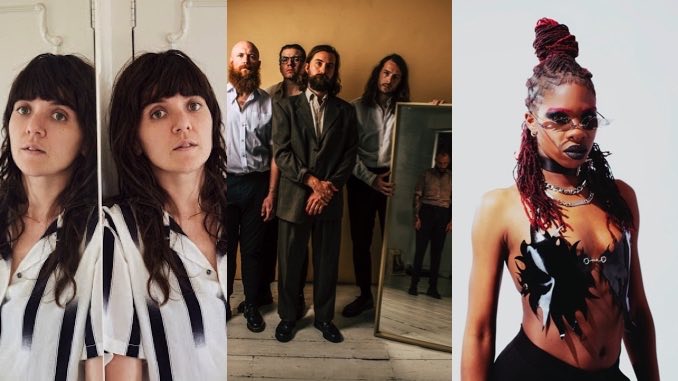 The elephant in this New Music Friday’s room is none other than Taylor Swift, whose much-anticipated Red (Taylor’s Version) seems to have captivated everyone on Earth (save Jake Gyllenhaal). But don’t let that pop bombshell overshadow the rest of today’s new records—there’s plenty more to get excited about, from the latest efforts of Courtney Barnett and IDLES to Haviah Mighty’s follow-up to a Polaris Prize-winner, Silk Sonic’s debut and Speedy Ortiz’s return to their roots. Your weekend of exploring must-hear new sounds starts here.

Garbology is the first full-length product of a career-spanning creative relationship, reuniting veteran emcee Aesop Rock with his “Daylight” and “None Shall Pass” producer Blockhead. Mourning a close friend in January 2020, Aesop found himself in a creative slump and decided to write his way out, asking Blockhead to supply the beats—the rest is history. Their resulting record is anything but garbage, rather taking its title from the notion of finding treasure where others see only trash, whether by revitalizing old, forgotten songs as new samples, or simply picking up the metaphorical pieces after something important falls apart. Aesop and Blockhead do all of the above on Garbology, making hip-hop that vacillates between meditative and aggressive, but never falls short of arresting. “Pack a wallop, I’ll wallop a whole pack of punks / Pretty much a grizzly plucking sushi out the salmon run,” Aesop boasts on “Difficult,” having emerged from the other side of grief with a newfound strength. —Scott Russell

Things Take Time, Take Time is a record of contemplation, that damnable, lazy buzzword folks use when art denies them obvious adjectives for describing a deliberately relaxed piece. In Courtney Barnett’s case, contemplation is her immediate aim, though this can be broadened into a larger story about slogging through negativity to find a bit of sunshine. For a record born of introspection, though, Things Take Time, Take Time is surprisingly fun. Barnett flirts with lugubriousness, but doesn’t actually commit, because committing to moping isn’t the point. Looking inward and working through depression, exhaustion and other stresses naturally means facing up to a degree of sadness, but Barnett reaches the other side of her emotional processing with newfound optimism. Tell Me How You Really Feel didn’t pull punches; that record cut and stung as Barnett meant it to. She kept the music honest. Things Take Time, Take Time is vulnerable music, which represents an honesty Barnett tends to stray from in her superb discography. —Andy Crump

Floating Room, the noisy project of Maya Stoner, are able to pack so many emotions into four tracks on their Shima EP. Stoner pushes boundaries with her sparkling indie vocals, switching into ear-shattering shrieks. Embracing the grit and imperfection of ‘90s grunge, Floating Room channel those carefree guitar licks, mixed with a scathing edge that dissolves into feedback. Whether bidding farewell to a lost lover on “… See You Around” or sticking up a finger to colonizers on “Shimanchu,” Floating Room’s new record is a concise diary that contains multitudes. —Jade Gomez

Haviah Mighty made history with her 2019 album 13th Floor, becoming the first hip-hop artist and first Black woman to win Canada’s Polaris Prize. The Toronto-based rapper, singer and producer now makes her much-anticipated return with her new mixtape, Stock Exchange, titled for the way artists are treated as commodities, their relative value shaped by public perceptions. She has the honesty and self-awareness to acknowledge her own stock has shot up (“Polaris prize, now I gotta maintain / I feel ‘em rhymes, there’s a lot on my brain,” she raps on “Tesla”), but the poise and focus to deliver despite the pressure of high expectations, bringing intensity and authority to tracks like “Atlantic” and “Obeah.” Haviah Mighty’s vision goes global thanks to her international cast of collaborators—including Spanish multiple Latin Grammy-winner Mala Rodríguez (“Flamenco”), U.K. rapper Yizzy (“Protest”), and American artists Jalen Santoy (“Way Too Fast”) and Old Man Saxon (“Antisocial”), as well as Toronto’s Astrokidjay (“Coulda Been U”), JUNO Award-winning rapper TOBi (“Good On My Own Tonight”) and Grandtheft (“Avocado”)—and with Stock Exchange, her stage name only grows more fitting. —Scott Russell

it’s impossible to consider the magnitude of CRAWLER accurately without absolutely crushing on its first single, “The Beachland Ballroom.” The song, titled after the historic venue on the east side of Cleveland, is the zenith of the record—a vulnerable work of art where Joe Talbot transcribes either an anxiety attack or an explosive performance, depending on what perspective you bring to it. Talbot sings, “They could hear me scream for miles / The silence ringing for days,” atop a lingering one-note piano. IDLES could’ve played it safe and delivered another album about the urgent socio-political currents and mental health issues surrounding them. Instead, they’ve never delved so deeply inwards. CRAWLER is a project about flaws, healing and reclamation. It’s a remarkable, haunted and resonant touchstone for rock and roll, a record unafraid of its own emotions and openness—full of stories worth returning to and untangling a hundred times over. —Matt Mitchell

Philadelphia poet Camae Ayewa, best known by her stage name Moor Mother, has embraced experimental music in all of its forms. Her stream-of-consciousness poems have translated into collaborations with artists from The Bug to billy woods. Open the Gates, the most recent release from her freeform jazz ensemble Irreversible Entanglements, is another fine example of her versatility. Firmly rooted in the framework of radical Black art and Afro-futurism, Open the Gates is a magical experience that, though it doesn’t require it, certainly benefits from your full attention. —Jade Gomez

För Allting finds Swedish quintet Makthaverskan braving a new frontier, recording with a producer (HOLY’s Hannes Ferm) for the first time. Yet the Gothenburg-based band—vocalist Maja Milner, guitarists Hugo Randulv and Per Svensson, drummer Andreas “Palle” Wettmark and bassist Irma Krook—continue to conjure dream-pop bliss as reliably as ever on their fourth full-length album, expanding their sonic palette without losing sight of what makes them special. They’re bright and upbeat on the new wave of “Tomorrow,” then darkly compelling via the propulsive throb of “Caress”—a little bit Cocteau Twins, a little bit The Cure. They make post-punk pretty on “Lova,” and they’re utterly anthemic on “These Walls,” with Milner’s voice resonating to the rafters, like Alvvays covering arena rock. Whichever way Makthaverskan choose to sway from track to track, those with a penchant for atmospheric vocals over shimmering guitars are in the right place alongside them. —Scott Russell

NNAMDÏ: Are You Happy EP

NNAMDÏ is one of Chicago’s finest musical innovators, blending together almost any sounds you can think of on the blank slate of hip-hop, which is something he never loses. His newest EP Are You Happy is a collaborative effort with fellow Chicagoan Lynyn. With NNAMDÏ leaving all production to Lynyn, his songwriting shines. With silky vocals that keep one foot in R&B and the other in indie pop, NNAMDÏ gets pushed to his artistic limits over Lynyn’s jittery breakbeats and footwork firmly rooted in their city. It’s a perfect compromise between the two artists, creating an exciting musical exchange that still feels natural to them both. —Jade Gomez

Sadie Dupuis circles back to where it all began on this record, reimagining and reissuing the music she made when Speedy Ortiz was just a humble, home-recorded solo project. The double LP marks the band’s 10th anniversary by collecting their The Death of Speedy Ortiz LP and Cop Kicker EP—both of which were digitally self-released via Bandcamp a decade ago, but have remained “largely off-line” ever since—and adding a set of previously unreleased bonus tracks titled …Forever. The remixed and remastered reissue features “extensive production updates” by Dupuis, who played every instrument on the original recordings. It’s essentially the Rosetta stone of Speedy Ortiz’s sound, a restless, raw collection of bedroom-rock intimacy and hooky noise-pop. —Scott Russell