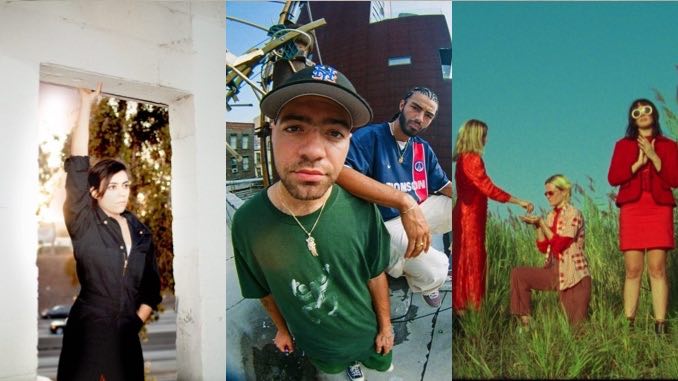 October’s first New Music Friday has arrived, kicking off a month that is absolutely littered with worthwhile albums. Today, that includes what’s shaping up to be a breakout record from Sarah Tudzin’s illuminati hotties, the full-length collaboration between New York City emcee Wiki and producer Navy Blue, and the much-anticipated debut album from Brooklyn art-punks Gustaf. We won’t keep you occupied any longer—dive into the first audio feast of October below.

Taylor Vick, who performs under the name Boy Scouts, is unafraid to linger in desolation. Her vivid portraits of life’s unanswered questions are composed with the haunting grace of her inspirations, such as Angel Olsen, Damien Rice and Elliott Smith. With a higher production value does not come a devaluing of her message, as shown by the strings that cradle her words with delicacy as she ruminates on life, death and mental health. Wayfinder is an album reminiscent of the California sun juxtaposed against the light, oceanside Bay Area wind with which Vick is familiar, and it reminds us of the beauty in uncertainty. —Jade Gomez

Brandi Carlile: In These Silent Days

In These Silent Days is at its best when Brandi Carlile takes her foot off the gas pedal and dials up the wisdom. With its acoustic fingerpicking and tight vocal harmonies, “This Time Tomorrow” is the album’s closest cousin to her early rootsy output, and the encouragement threaded through its verses feels especially comforting in our current times. “Letter to My Past” follows a similar theme, this time echoing the knowing and poignant piano-pop of her good friend Elton John. And “Throwing Good After Bad” closes the album much like “Party of One” closed By The Way, I Forgive You: with a devastating half-light ballad sung from inside the smoking crater of a relationship. Where “Party of One” offered a glimmer of hope for reconciliation, however, “Throwing Good After Bad” seems resigned to falling apart. “You allowed me to grow, but you know when you know,” Carlile sings, her voice quivering as strings swell. “And now the party’s over and you’re dancing alone.” —Ben Salmon

As you might imagine, LP1 is the debut album from Couplet, i.e., former You Blew It! singer and songwriter Tanner Jones, Sincere Engineer’s Adam Beck, and Evan Weiss of Into It. Over It. You won’t find the crashing, guitar-forward rock of any of those projects here—Couplet is on a softer, more spacious sort of wavelength, and you can hear touches of The American Analog Set and Tycho alike on standout tracks like “Sold Our Shirts.” That’s not to say LP1 moves at any one speed—”Old Elba,” for instance, begins as hushed, The Postal Service-esque electro-pop before breakneck drums shift the song into a higher gear. Jones’ breathy vocals and the scenes he evokes are enough in themselves for LP1 to compel, but Couplet surround that tender core with instrumentation that prizes the unexpected, creating drama without having to contrive it, and showing that “thoughtful” and “thrilling” don’t have to be mutually exclusive. —Scott Russell

The full-length debut of Toronto multi-instrumentalist duo Tom McGreevy and Evan Lewis (formerly known as Ducks Unlimited), Modern Fiction is a must-listen for fans of The Feelies, Rolling Blackouts Coastal Fever, and everything in between. An ideally paced, 10-track, half-hour listen, the record is replete with robust jangle-pop guitars, cheery melodies and clever lyricism—all of which belie the darkness at its heart. Indeed, Ducks Ltd. spend much of their first album examining the lies we tell ourselves and the emotional corners we cut, distorting the world around us in our attempts to better deal with it. The band’s generous and accessible sound is the sugar that makes that medicine go down. —Scott Russell

There’s a distinctive charm to bands like Brooklyn quintet Gustaf, who craft a slickly stylish, fully realized rock sound while flatly rejecting pretension and self-seriousness. Like DEVO or Talking Heads before them, Gustaf deal in clever, irresistibly upbeat art-rock that’s as playful as it is thoughtful, with an LCD Soundsystem-esque dance-punk edge to keep the energy and intrigue up. Tine Hill (bass), Vram Kherlopian (guitar), Melissa Lucciola (drums), Tarra Thiessen (vocals, percussion) and Lydia Gammill (lead vocals) recorded their forthcoming debut album with Carlos Hernandez (Ava Luna, Sneaks, Mr. Twin Sister) at Brooklyn’s Honey Jar Studio, with co-production from Gammill and Hernandez, and its singles have made Gustaf a fixture on Paste’s top track roundups of the past couple months. Their potential is plain to hear, particularly in full-length form. —Scott Russell

Austin duo Will Taylor and Charlie Martin—two reformed drummers turned into self-proclaimed “pillow core” wunderkinds—have been kicking it under the name Hovvdy in the so-called “language arts rock” corner of the indieverse for over half a decade now. As a beloved part of Double Double Whammy’s roster, Hovvdy fashioned a woozy sound that unfurls slowly and rejects climax on their 2016 debut Taster. Then, on their sophomore effort Cranberry, Taylor and Martin made that sound their signature, before suiting up in poppier getups on 2019’s Heavy Lifter. Cut from the same cloth as other twangy acts like Pinegrove and Alex G, Hovvdy’s seemingly minimalistic bent sometimes covers up what sleeps beneath: a complex, well-layered sound that’s generous in its assembly, but doesn’t flaunt its power. And on True Love, their first release with Grand Jury, the duo exchange those momentary pop leanings for a Cranberry-like sheen—finally owning their sound by finagling a record that’s slumping with drowsiness, yet somehow erupts with unshakeable charisma. With Andrew Sarlo behind the boards, True Love follows the same woodsy, guitar-driven production he’s evoked on recent Big Thief and Bon Iver records. But even with Sarlo’s fingerprints everywhere on this record, it doesn’t withdraw Hovvdy’s DIY, lo-fi tape deck roots. In turn, their collaboration achieves a sharp folk-rock sound that’s drunk on precision and layered minimalism. —Matt Mitchell

illuminati hotties: Let Me Do One More

As illuminati hotties, Sarah Tudzin seems relentlessly committed to perfecting the subgenre she coined, “tenderpunk,” and creating an album worth waiting for. After the success of their debut, Kiss Yr Frenemies, she and her band were tediously crafting their follow-up until relations with their label crumbled. illuminati hotties found themselves in a contract to release an album without the infrastructure they desired and in a very punk-like fashion, they released the surprise-streaming Free I.H.: This Is Not The One You’ve Been Waiting For. Tudzin clearly knows what she wants, and with each album, illuminati hotties keep getting closer to their end goal. There are no brakes on Let Me Do One More—rather, it is more like a sprightly roller coaster, with mellow gaps in between punchy electronic tracks creating arcs bound to give out an exhilarating sort of whiplash. Fury meets romantic longing, sneering meets sincere whispers, and calmer sounds meet the abrasion of others. And while that sounds like a large feat, to mingle these opposites, illuminati hotties bounce between them with great precision. —Ana Cubas

Pond have fully gone off the deep end in the absolute best way. Taking a page from Can, the Australian band embarked on tireless jam sessions until they arrived at the finished psych-rock goodness of their new album, 9. The band explore art rock and new wave with a psychedelic tint, paying homage to the eccentricities of the ’80s and ’90s without ever sounding corny. 9 is a chaotic listen, clocking in at about 40 minutes long, and it works. It’s an auditory onslaught of ideas, collaged into an album that seeks to challenge and break routine. —Jade Gomez

English singer/songwriter Tirzah is always brilliantly off-kilter, with her 2018 debut Devotion containing morphed vocals and artificial sounds paired with glistening piano keys. It hinted at something more, and her newest effort Colourgrade is just that. Using R&B as a template, Tirzah examines motherhood and intimacy with an endless amount of grace, contained in her shimmering vocals, and accented with synths and bass. Colourgrade has a distinctly human feel to it, mirroring the startling shift from pregnancy to birth. Tirzah’s latest effort is mesmerizing, graceful and gentle, allowing the avant-garde in without it overpowering her message. —Jade Gomez