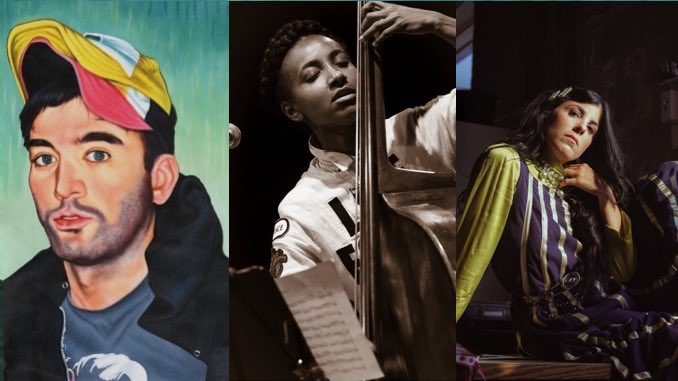 That New Music Friday feeling never gets old, does it? It’s like Christmas morning coming 52 times a year, bringing a bounty for the ears with it, regardless of how well we’ve all behaved. Today’s slate of top new release priorities is quite Canadian, with four of its 10 entries coming courtesy of artists among our neighbors to the north. That includes Ada Lea and her compelling new record, one of several standouts alongside the collaborative album from Asthmatic Kitty labelmates Sufjan Stevens and Angelo De Augustine, Esperanza Spalding’s new experimental jazz collection, and much more. Tear the wrapping off 10 of this week’s most exciting albums below.

Toronto trio Absolutely Free titled their second album—and first in the better part of a decade, following their Polaris Music Prize-nominated, self-titled 2014 debut—for the name of a technical function on a synthesizer, in which the transmission of MIDI data continues after a keystroke. Fittingly, Aftertouch busies itself in the exploration of such liminal spaces of existence, where consciousness is caught between planes, like 21st-century people attempting to inhabit both their physical and digital identities. Absolutely Free add four new tracks to the four that appeared on their Remaining Light EP earlier this month, deepening their brightly melodic blend of psych-rock and electro-pop in accessible and satisfying dimensions, with an assist from producer Jorge Elbrecht (No Joy, Gang Gang Dance, Japanese Breakfast). Aftertouch is an album of the present and future (and digital and analog) alike, embodying the very in-between state with which it shares a name. —Scott Russell

Ada Lea: one hand on the steering wheel the other sewing a garden

Indie-pop singer/songwriter Ada Lea (born Alexandra Levy) asserts her artistry anew on one hand on the steering wheel the other sewing a garden, the impressive follow-up to her 2019 debut what we say in private. Set in Levy’s native Montreal, the album looks back on personal moments from the artist’s coming of age in the city, using delicate, carefully crafted guitar pop and folk to connect her memories to a wider collective consciousness. “Every year is just a little bit darker / Then the darker gets darker / Then it’s dark as hell,” Levy sings on hooky album opener “damn,” the unflinching observation letting a bit more light into the world. Levy wrote and demoed one hand on the steering wheel during an artist residency in Banff, Alberta, reuniting with her woman, here EP (2020) collaborator Marshall Vore (Phoebe Bridgers) to round the album into form. Drummer Tasy Hudson, guitarist Harrison Whitford (of Bridgers’ band) and mixing engineer Burke Reid (Courtney Barnett) also lent their talents to the project. —Scott Russell

Toronto-based singer/songwriter Andy Shauf didn’t wait long to follow up his acclaimed 2020 album The Neon Skyline, announcing his surprise latest LP just days before its release. A press release allows that Wilds “can certainly be interpreted as a companion piece” to its predecessor, as its nine tracks were picked from the 50-odd songs Shauf recorded while writing The Neon Skyline. Presented in “near-unfiltered form,” the songs on Wilds are intended to stand on their own while also providing a window into Shauf’s Neon Skyline-period creative process, returning to that album’s tales of broken romance and everyday escapism. Shauf plays all the instruments, arranges on the fly and records to “a little tape machine” in his Toronto studio, delivering a warm, intimate baroque-pop, folk and rock record. Each vignette envelops you like a warm blanket, as comforting as it is easy to get lost in. —Scott Russell

The Body and BIG|BRAVE: Leaving None But Small Birds

Leaving None But Small Birds, which consists of re-worked traditional songs and hymns from Appalachia, Canada and England, casts both The Body and BIG|BRAVE in a whole new light that should nevertheless resonate with both fanbases and endear them both to listeners who might otherwise be put off by the forcefulness of their respective catalogs. By the time any guitar distortion eases its way in about halfway through the song sequence, the transition is so gradual that it makes perfect sense, announcing itself in a most unobtrusive fashion. Both bands have hit their audience over the head with jagged contrasts in the past, but here they pace the music so that there’s a gradual, almost imperceptible incline in heaviness. Indeed, everything about Leaving None But Small Birds bears a deliberate attention to detail. Even fans of BIG|BRAVE and The Body might not necessarily think of them as aspiring masters of craft, but there’s no other way to see them now after this collaboration. With the insistent, shanty-like cadence of “Oh Sinner,” for example, the two groups mimic the hypnotic drone that’s become BIG|BRAVE’s stock in trade, but together they prove that they can be just as powerful with the volume turned way down. —Saby Reyes-Kulkarni

Four-time Grammy-winning jazz bassist Esperanza Spalding’s latest record is unlike any she’s released to date, a highly collaborative effort that seeks to make a therapeutic impact on its listeners. Spalding worked alongside an array of musicians—drummer Francisco Mela, pianist Leo Genovese, guitarist Matthew Stevens and saxophonist Aaron Burnett are her core band, while Wayne Shorter, Phoelix, Raphael Saadiq, Justin Tyson, Ganavya Doraiswamy and Corey King all make contributions—as well as researchers and practitioners in fields including neuroscience, music therapy, psychology and ethnomusicology. The result is an hourlong, 12-song (or “Formwela,” as each numbered track is primarily titled) set, each individual piece of which was calibrated to produce a specific internal response from the listener. Entering the Songwrights Apothecary Lab is a richly engrossing experience whether you buy into its science or not, an epic collection of jazz and soul experiments that range from the gently hypnotic (“Formwela 3”) to the cosmically sprawling (“Formwela 8”) and beyond. —Scott Russell

Mouth Full of Glass is the stunning solo debut of Chicago-based singer/songwriter, multi-instrumentalist and OHMME member Macie Stewart. The lush and inviting eight-track effort finds Stewart drawing more on her avant-garde jazz and classical background than on OHMME’s sharp art-rock lines, exploring her inner world in a series of sweeping baroque-pop compositions. Started pre-Covid, but completed in 2020’s early lockdown days, Mouth Full of Glass benefits from Stewart’s solitude, matching its richly realized instrumentation to the fearless self-inventory of her songwriting. “Finally, finally, finally I learn to tell the truth to myself,” she sings in the album’s opening moments, acoustic guitar, synth and strings swirling around her, like the wind at Stewart’s back as she explores uncharted territories deep inside the heart and mind. —Scott Russell

Toronto-based producer Mas Aya (aka Brandon Valdivia) has worn many hats, joining groups such as Not The Wind and Picastro as he established himself in Toronto’s vibrant music scene. On Máscaras, or “masks” in Spanish, Valdivia investigates his Nicaraguan roots through his juxtaposition of traditional instrumentation with modern sounds. Complicated time signatures that fall into place like one’s heartbeat racing, then slowing speak to the instinctual rhythm and musicality of indigenous ritual. Chopped vocals and ambience that morph into organized chaos are accented by flutes and punchy drums. Valdivia marries the instinctual with the artificial, investigating his heritage through an abstract lens. —Jade Gomez

Sad Park: It’s All Over

The sophomore album from Los Angeles outfit Sad Park, It’s All Over will scratch just about any rock itch you’ve got, combining the painfully passionate vocals of emo with corrosive riffs and jitterbug punk percussion. Tracks like standout single “Nothing Ever” demonstrate the band’s ability to transcend expectations with their arrangements, as well as their style, with carefully controlled shifts akin to the sudden drops and stops of a rollercoaster ride. Sad Park don’t take you on that ride just because they can—their dynamic rock is always in service of their songwriting, reinforcing their frank considerations of the emotional upheaval and anxiety that come with change. —Scott Russell

The Shivas: Feels So Good // Feels So Bad

Delicate like 2016’s Better off Dead, with a determined, candid sense of desperation and frustration, Feels So Good // Feels So Bad is an album of acceptance. It’s an uphill battle, with a glorifying sense of self and a satisfying sound to accompany the motions. Portland, Oregon-hailing psych-surf band The Shivas accomplish another time-traveling, reverb-ridden sound that refuses to get boring. Jared Molyneux’s guitar work knows when to be bright or bashful at the right times, breaking into guitar solos that possess a late-’60s groove. There’s a certain skill to channeling a slow surf-jam like “You Wanna Be My Man” as nimbly as the garage-heavy “Feel So Bad,” but The Shivas seem to blissfully flourish at either end of that spectrum. —Ana Cubas

Sufjan Stevens’ brand new collaborative album with fellow Asthmatic Kitty recording artist Angelo De Augustine, takes its name from the Zen Buddhist term Shoshin, which encourages those who practice to approach situations with a sense of openness and the acceptance of a “beginners mind.” It’s a message that permeates the record in both its message and in its construction. Stevens and De Augustine both possess gorgeous falsettos that evoke a certain beauty on their own. But on the moments that they sing in tandem on the album, they conjure elemental harmonies that neither could have achieved while double-tracking alone in the hushed corners of a studio. On the opener “Reach Out,” the pair sound like a bruised, cardigan-draped interpretation of the Everly Brothers as their voices meld with one another like two spirits holding hands and walking through a brick wall into some realm beyond our world. Neither of their personalities as vocalists are diminished in this collision, as Stevens assumes his role of the lower register and De Augustine hits the high notes. While this aspect of the record is an endless thrill that only grows more impressive as you get further into the tracklist, perhaps its greatest achievement is the downright loose feel of some of the orchestrations and performances that the two were able to pull from one another in this collaboration. By no means is this The Replacements’ Hootenanny, but there is a sense of ramshackle comfort and ease to these songs. —Pat King