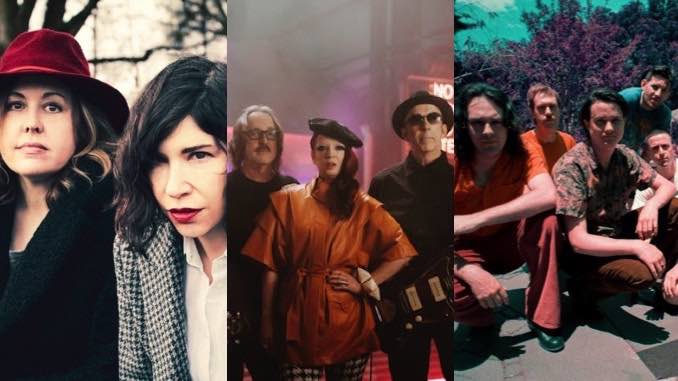 Paste’s midyear picks for 2021’s best music are right around the corner, but we’re putting one foot in front of the other with today’s (June 11) new album roundup, featuring this New Music Friday’s most notable releases. Veteran rock acts Sleater-Kinney and Garbage are back with new records, King Gizzard & The Lizard Wizard continue their head-spinning prolific streak, and Slayyyter and kezia make their debuts, all in one release day. Give them all a spin below, and as ever, if you love what you hear, buy a copy and support the artists!

The surprise new EP from Baltimore, Maryland’s Angel Du$t includes two new singles, “Love Is the Greatest” (feat. Los Angeles producer/musician Shlohmo) and “All the Way Dumb,” as well as three tracks from the band’s 2020 EP LIL HOUSE, “Turn Off The Guitar,” “Lil House” and “Never Ending Game,” and remixes of that last track by Panda Bear and Lunice. Angel Du$t vocalist/guitarist Justice Tripp describes the band’s new EP, produced by Rob Schnapf (Kurt Vile, Elliott Smith), as “pimp and chill at the same time,” which is hard to argue with: Though the band is frequently associated with hardcore punk, Bigger House’s new songs are hooky pop-rock strummers first and foremost, punctuated with just enough synth accents, horns and spiky electric riffs to keep you on your toes as a listener. The full-length follow-up to 2019’s Pretty Buff looms larger by the minute. —Scott Russell

Cold Cave just get the unique aura of 1980s post-punk and goth music in a way that very few acts are able to replicate. Their latest offering, Fate in Seven Lessons, is no different, with the reinventions of each release resting in the subtleties of the synths and drums throughout the group’s career. Cold Cave’s de facto leader Wesley Eisold possesses that dark, brooding voice tinted with sensuality that makes all of their music so alluring. The hissing industrial drums are reminiscent of Pretty Hate Machine-era Nine Inch Nails, ushering in a darker sound for the group to explore as they expand their repertoire. Eisold wears his influences on his sleeve, most notably The Sisters of Mercy, The Cure and NIN. Nonetheless, underneath the grim color palette are small glimpses of joy. “Promised Land” is the perfect darkwave dance track led by bright piano keys, and “Happy Birthday Dark Star” is Cold Cave at some of their most accessible. —Jade Gomez

Following his last proper album, 2020’s Zushi, Dean Blunt returns with some of his most candid and gorgeous songs on Black Metal 2. A sequel to 2014’s Black Metal, Blunt’s new album scales back the volume of his vision in favor of sparser instrumentals, with his low hum accompanying soft horns, his clean acoustic guitar strumming, and muted bass. The eerie strings of opening track “Vigil” evoke a similar ambient darkness as the works of artists like Burial or Scott Walker, with brooding lyrics to match. Black Metal 2 is a clear maturation for Blunt, stepping up his arrangements, his use of space, and his lyrical talents. —Jason Friedman

Garbage: No Gods No Masters

It seemed questionable when Garbage announced their new album, their first in five years, was titled No Gods No Masters. But No Gods No Masters leads with an honesty that’s hard to deny, even when it leans into more typical protest music tropes. Opener “The Men Who Rule The World” leads with the whirling sound of a slot machine, which gives way to a bopping synth-pop track tying the cruel realities of misogyny, capitalism and fundamentalism together into a streamlined narrative. A singer whispering “money, money, money” across a song’s bridge isn’t exactly treading new ground, but Shirley Manson’s still-commanding voice sounds delightful layered atop pounding drums and frenzied riffs. Where No Gods No Masters really shines, however, is in its more intimate tracks. Single “Wolves” is reminiscent of vintage Garbage (less synth, more shredding) as Manson justifies the youthful mistakes of her past. “Anonymous XXX” is a sleazy, calypso-infused song all about the joys of casual sex, and it’s a refreshing reprieve from the heavy lyrical content across the rest of the album—and, hey, preaching sexual freedom is political in and of itself, too. Garbage still have that irreverent spirit they’ve always had, and it’s a delight to see that the world’s horrors haven’t changed that; they’re still here serving dissatisfied, withering gazes at a decaying society, just like they were back when they moaned about their rainy day gloom. —Austin Jones

It’s not often you see a notable album arrive without being preceded by any singles whatsoever, but then again, King Gizzard & The Lizard Wizard are, uh, not your average band. On their 18th studio album—they’ve been at this a decade, so … you do the math—the sonic explorers out of Melbourne, Australia, try their hands at synth-forward dream-pop, dispensing with their usual freak-psych maximalism and opting for a more danceable set of songs, all written on modular synthesizers. A press release accurately describes Butterfly 3000 as “sound[ing] simultaneously like nothing they’ve ever done before, and thoroughly, unmistakably Gizz”—there’s a certain bold, bright freedom to this record that affirms King Gizzard & The Lizard Wizard are at their best when unmoored and scoffing at the very concept of a comfort zone. —Scott Russell

At only 22, Chicago’s own Polo G has become one of the leading figures of a new era of sad boy rap. After the success of his single “RAPSTAR,” a track that currently sits at over 200 million Spotify streams, Polo offers up his third album Hall of Fame. Don’t let the title fool you, because Polo traverses his music career with vulnerability and humility. The tracks that stand out most are the ones with his beautiful talk-singing that sounds effortless, especially “Heart of a Giant,” where he trades verses with fellow crooner Rod Wave. It’s a third album that very much feels like a debut, properly introducing audiences to Polo’s versatility after his meteoric rise to rap stardom. —Jade Gomez

Golden Doubt is the second album (and first on Ba Da Bing Records) from Melbourne-via-Tasmania quartet Quivers, following their 2018 debut We’ll Go Riding on the Hearses and 2021 full-length cover of R.E.M.’s Out of Time. We highlighted lead single and Golden Doubt opener “Gutters of Love” as one of its release week’s best tracks back in March, praising “singer Sam Nicholson’s voice,” as well as the song’s “gleaming guitar work, vocal harmonies from Quivers members Holly Thomas and Bella Quinlan, and keen production courtesy of Matthew Redlich (Holy Holy, Husky, Ainslie Wills).” There’s plenty more where that came from on this album, 40 minutes of sunny, yet deeply felt jangle-pop that scratches the melodic rock itch without a shadow of a Golden Doubt. —Scott Russell

On Slayyter’s debut album Troubled Paradise, the singer proves her throat prowess in more ways than one. Throughout the glossy, hyperpop-propelled album are raging, sex-fueled club hits meshed with sensitive portraits of the artist’s soul. Littered with influences from Y2K aesthetics and the music of artists like Britney Spears, Kylie Minogue and Avril Lavigne, Slayyter successfully recalls the saccharine magic of that era. Through banger anthems like “Throatzillaaa” and “Venom,” the artist takes the aesthetic ideals of her influences, reclaimed from the way they were often discussed and vilified in pop culture, and distills them to their purest form, pushing the vision even further. The robust beats and hypersexual lyrics are fun, radical and ceaselessly danceable, making the vision behind Troubled Paradise a successful statement for the artist. —Jason Friedman

On Sleater-Kinney’s 10th album Path of Wellness, the aim of the game is joy and letting go of shame and disappointment. The first record without longtime drummer Janet Weiss finds the band exploring new directions, with Carrie Brownstein and Corin Tucker handling all of the production themselves. Tracks like “High In The Grass” and the item’s title track serve as exciting summertime anthems, with repeating lyrics relaying the theme of the album: “I’m on the path of wellness.” On “Complex Female Characters,” vocalist Carrie Brownstein explores the theme of sexism as it relates to people pressuring her to fit a particular form. 10 albums deep into their career, Sleater-Kinney continue to write concise and expressive alt-rock songs that bite to the core. —Jason Friedman