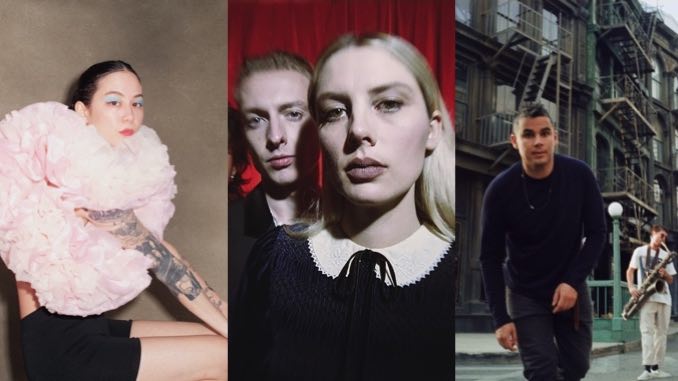 Subtlety is not in cleopatrick’s vocabulary, and the duo’s debut BUMMER lays their baggage out on the table in all its distorted, ear-shattering glory. BUMMER is a welcomed return to classically rowdy punk, and it feels genuine. The obvious hip-hop influences underscore the album as frontman Luke Gruntz engages listeners in his mesmerizing belt that weaves into talk-singing. The machismo of early noise-punk is replaced by the Canadian duo’s vulnerability as they sing of being ripped off on “FAMILY VAN” and examine their own toxicity on “GREAT LAKES.” cleopatrick is rock at its most uninhibited for a new generation, and they are doing a fantastic job at it. —Jade Gomez

There is a sort of healing nature that comes through in Greentea Peng’s music, like an auditory hypnosis. Her buttery vocals linger on syllables like warm honey as her band, the seven-piece Seng Song Family, crashes around her, playing to meet her in her orbit. Her enchanting debut MAN MADE focuses on repetition, love and self-awareness to promote unity in the face of oppression. It is an album that defies all expectations of genre, utilizing elements of jazz and R&B as a framework for her psychedelic soul. It is an ambitious debut at over an hour in length, but Greentea Peng carries herself with such strength throughout the album to warrant her position amongst her inspirations. —Jade Gomez

The self-titled debut from the Montreal-based duo of art-pop singer/songwriter Helena Deland and producer and multi-instrumentalist Ouri (Ourielle Auvé), Hildegard winds the former’s gossamer vocals around the latter’s icy electronic structures. The pair named their project for Hildegard of Bingen, the “historical priestess figure in the 12th century who was also an enlightened musician, doctor and missionary. Just this really rare feminine figure to have survived the Middle Ages in terms of history,” as Deland explained to Paste last December. Hildegard, the first release on Partisan Records offshoot section1, is a hypnotic, intimate eight-song set that carries the torch of its namesake forward, combining its eponymous duo’s seemingly disparate talents into something distinctly feminine and divine. —Scott Russell

One of our most-anticipated albums of the year, let alone the month of June, Michelle Zauner’s third album as Japanese Breakfast finds her shedding the sadness and trauma of her past, embracing joy and celebrating Jubilee. Upon its announcement, Zauner said of her follow-up to 2017’s Soft Sounds From Another Planet in a statement, “After spending the last five years writing about grief, I wanted our follow-up to be about joy. For me, a third record should feel bombastic and so I wanted to pull out all the stops for this one.” The soaring, yet densely layered Jubilee lives up to that billing: Zauner’s palette boasts more colors than ever—the yearning strings that conclude “Kokomo, IN,” the regal horn outro on “Slide Tackle,” the noise-rock crescendo of closer “Posing For Cars,” so much more—and her new masterpiece is abundantly vivid as a result. —Scott Russell

Loraine James’ anxiety-inducing Reflection evades characterization, exploring the best elements of U.K. drill, grime, garage and trap music, and using the palette to paint portraits of Blackness, queerness and loneliness. It is not meant to be an easy listen. Instead, James uses her music to exist as a dialogue between sound and identity. Her usage of the voice as its own instrument illustrates the malleability of identity and the importance of protecting oneself. You may not understand James’ mumbling underneath the chaotic splices of sound, but the heart is there. It is just as much an experience for her to make as it is for listeners to enjoy, and James’ musical autobiography is a truly captivating experience. —Jade Gomez

The second album from Berlin-based composer and producer Pan Daijing, Jade is music best experienced at night, alone, or both. Written and recorded over the past three years (she released her debut Lack in 2017), the album is sparse and unnerving, running the gamut from operatic ambient music to disjointed, aberrant drone. The atonal buzz of “Dictee” rattles not only your bones, but also your soul, while on “Dust,” clattering, scattershot percussion is ever-shifting beneath Daijing’s ghostly vocals. Your ears adjust to Jade the same way your eyes adjust to darkness—at first, it’s paralyzing, but as you learn to navigate it, suddenly its expanses are a gift, rather than a curse. Though a long while in the works, the album captures the moment in its examination of isolation, a state with which we’ve all become familiar in these times, whether we wanted to or not. “Solitude is like an immense lake you’re swimming through,” Daijing says of Jade in a statement. “Sometimes you dip your head in and sometimes you lift it above.” As her album shows, those waters run awfully deep indeed. —Scott Russell

Poté: A Tenuous Tale of Her

St. Lucia-born, London-raised and Paris-based, producer and songwriter Sylvern Mathurin brings a global set of influences to bear on his output as Poté, which now comprises a second record, A Tenuous Tale of Her. The debut album released via Bonobo’s OUTLIER imprint, Poté’s sophomore effort features collaborations with Damon Albarn of Blur and Gorillaz fame, as well as Pierre Kwenders and INFAMOUSIZAK. Mathurin’s oaky vocal tone is reminiscent of Sampha at times, but its his adventurous electronic production that makes A Tenuous Tale so spellbinding—his soundscapes are both entrancing and invigorating, often in the space of the same song. Just take “Stare,” with its longing, crooned verses and trap drum-spiked refrains, or the Albarn-featuring “Young Lies,” which finds the duo exchanging vocals over Caribbean club percussion and airy synth atmospherics. A Tenuous Tale is an album equally suited to sliding smoothly by in the background or taking over the airwaves, but above all, it’s a showcase of Poté’s boundary-collapsing abilities. —Scott Russell

Raheem DeVaughn is a grown man that makes music for grown-ups. It sounds reductive, but at its most basic, Lovesick is bringing back the early days of neo-soul and R&B, with DeVaughn channeling legends like Maxwell and Ginuwine with the earnestness of Anthony Hamilton to create a masterful display of sexual tension on his latest effort Lovesick, aided by Detroit producer Apollo Brown. It’s a sensuality that will make even the most stoic of listeners blush as DeVaughn’s whispery croons ease their way into high notes dripping in ecstasy. Grab a close friend or, at the very least, a good fan for Lovesick. You’re going to need it. —Jade Gomez

“In the last five years, something that has been on my mind is the concept of less is more, in the unit of the song and the unit of an album,” Rostam Batmanglij told W Magazine shortly after he announced his sophomore solo LP, Changephobia. Listening to the album—his first following his extensive co-production and co-writing work on Clairo’s Immunity and HAIM’s Grammy-nominated Women in Music, Pt. III—you can hear exactly what he means. Whereas his official solo debut, 2017’s Half-Light, retained much of the nomadic, mildly chaotic dynamism he brought to Vampire Weekend’s first three albums as its founding producer, Changephobia feels smaller-scale on every level. It’s 14 minutes shorter than its predecessor, and it’s light on the warbled, bursting electronics that defined Half-Light’s hazy tales of queer romance. It feels quiet and intimate even when it’s roaring. —Max Freedman

On their third album, Wolf Alice stand taller and prouder than ever, fulfilling a strikingly vibrant ambition. Guitars soar and whimper alongside vocalist Ellie Roswell’s evocative, emotive vocals. Cinematic and catchy, the immaculate production brings out the raw and engaging songwriting chops of the Mercury Prize-winning group. Blue Weekend finds Wolf Alice at the top of their game, with each track memorable and each idea fresh and unique. —Jason Friedman